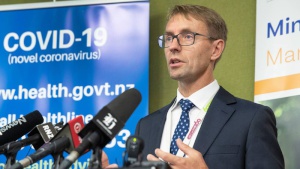 Surely, the only thing worse than making a serious mistake is to then try and minimise its implications – especially when the efforts at damage control seem highly likely to get shot to pieces. Yet somewhat incredibly, Health Ministry director-general Ashley Bloomfield did just that yesterday even after one of the two British visitors had previously misled officials by indicating that her possible Covid-19 symptoms were due to a pre-existent condition. Surprisingly, the British visitors were not tested before they were released from quarantine and set off on their now-notorious drive to Wellington where the virus was belatedly detected. Yesterday, Bloomfield chose to take at face value

the visitors’ implausible story that they’d met no-one, and hadn’t stopped at any location (petrol station, comfort stop) while en route to the capital.

Given the track record, none of the assurances given by the British duo about their contacts before and after their arrival in Wellington can now be relied upon. Presumably, this episode indicates the pressure being put on government and officialdom by the legal challenge to the government’s previously tough restrictions on compassionate entry. Under pressure, the system of quarantine for compassionate entrants seems to have buckled. As a consequence, the contact tracing system now has to find and alert an estimated 313 potential contacts of these two visitors alone.

For many New Zealanders, it has been a shock to be reminded about the fragility of our bubble of five million. Along the way, the government’s aura of Covid-19 competence has been punctured, and the Health Ministry has spectacularly failed to follow its own rules. Further up the chain of command, the hapless Health Minister David Clark is refusing to resign, but if this British duo do end up generating a full-blown Covid-19 cluster, his position will become intolerable.

One side effect will be to slow down any progress towards creating a Transtasman bubble. This week, Australia has signalled that it expects to be effectively closed to the outside world for the rest of 2020, with New Zealand being one of the few possible exceptions. Yet that exceptional status will surely depend on us being viewed as a safe origin point for visitors to Australia, and this episode with the British pair could be taken to indicate that this is not the case. In similar vein, New Zealand needs to be able to depend on Australia being a safe origin for incoming visitors to this country. Unfortunately, some of the news coming out of Australia this week has not been promising :

A trend of rising community transmission cases of coronavirus could delay the timetable for easing COVID-19 restrictions, Victoria’s health chief has warned, after the state recorded 21 new cases. Fifteen of the new cases are returned overseas travellers, while the number of cases of community transmission has risen by six, the state’s largest single-day increase in more than a month……

This uptick in community transmission is occurring just as Victoria moves to further relax its lockdown restrictions on social gatherings, sporting events, gyms, cafes and restaurants. Interestingly, some of the new Covid-19 infections in Australia have originated among the contractors ( security guards, hotel staff etc) who service the country’s quarantine hotels :

Since May 26, at least 16 people have been diagnosed as part of a coronavirus outbreak connected to contractors working at quarantine hotels.

It would be interesting to know just how strictly the working conditions of those servicing our own quarantine sites are being monitored. In a related area of concern, the Air New Zealand staff bringing hundreds of New Zealanders home from Covid-19 hot spots around the world every week, are reportedly

not being required to observe the same safety precautions as other airline staff (eg Emirates) either when they’re on the job, or after hours, given that they can return straight to their homes after having had prolonged contact for hours with passengers from Covid-19 hot spots. The good news : once people are in quarantine, strict rules are apparently being strictly observed.

Footnote : A thought experiment. At the end of the Covid-19 nightmare and after a vaccine has been found and is readily available…the question will arise as to what to do about the anti-vaxxers in our midst, who (arguably) will then be posing a risk to themselves, their families and everyone else. This op ed in the Melbourne Age does not advocate immunisation by force, but it does raise the prospect of social penalties being levied on the refuseniks. After Covid-19 has changed everything, anti-vaxxers could become social pariahs :

As a community, we should consider to what extent we allow organisations to prevent those who object to being vaccinated against COVID-19 to enter their premises, participate in their activities and, in some circumstances, seek their employment….. Restaurants could be allowed the right to refuse entry to those who are not vaccinated against COVID-19. Businesses, especially those involved in the care or service of vulnerable communities, might be allowed the right to refuse employment to those without a COVID-19 vaccination. Organisers of mass gatherings could deny the sale of tickets on this basis.

Good to know everything is going to be heading back to normal, once we find that miracle vaccine. (At last count, the antivaxxers included Novak Djokovic, Jim Carrey and Jessica Biel.)

Load Up Those Rubber Bullets

In a Werewolf column a few days ago I quoted a former cop who had told RNZ that the Police might as well use prisoners in jail to test out their new-fangled “ sponge bullets” because according to the former officer : “I can certainly see them being used in prisons for example, where [there’s] nothing to lose, I guess.” Nothing to lose, right. At the time, I meant to footnote that column with this old track by 10cc, who – plainly – could see 47 years ago just where all of this fancy rubber bullet technology was headed :