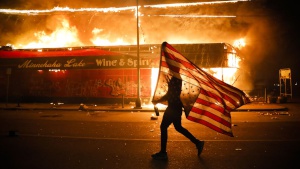 Poverty, discrimination and repeated acts of police brutality all help to explain the rage being expressed on the streets of American cities right now after the death of George Floyd but there is a more immediate cause as well :

Decades of research on police shootings and brutality reveal that officers with a history of shooting civilians, for example, are much more likely to do so in the future compared to other officers.

A similar pattern holds for misconduct complaints….. A study published in the American Economic Journal reviewed 50,000 allegations of officer misconduct in Chicago and found that officers with extensive complaint histories were disproportionately more likely to be named subjects in civil rights lawsuits with extensive claims and large settlement payouts.

In spite of this research, many law enforcement agencies not only fail to adequately investigate misconduct allegations, they rarely sustain citizen complaints.

I’m not saying that a few bad apples in the US police force have been spoiling it for everyone else. The point is rather that the oppressive policing of black communities – and their sense of desperation – is being made worse by the systematically flawed policies of recruitment and retention. (US police unions have played a negative part in this.) As a result, black communities have been left feeling they have no effective means of legal recourse, and little respite from these predators in uniform.

For instance : Derek Chauvin, the Minneapolis police officer now facing murder and manslaughter charges for killing Floyd had been the subject of 18 prior complaints. These included his participation in the 2006 killing of a Native American called Wayne Reyes, who had been pulled over by Police in connection with an assault on his girlfriend. In the space of four seconds, Chauvin and five fellow officers poured 43 rounds into the cab of Reyes’ truck, 23 of which hit Reyes.

Tou Thao, one of three other officers present while Chauvin knelt on Floyd’s neck had been the subject of six prior complaints, including participation in a 2017 Police attack on Lamar Ferguson, a black man out walking with his pregnant girlfriend. Ferguson was left hospitalised with broken teeth and other injuries. While the city of Minneapolis eventually made a $25,000 payout to Ferguson, the officers responsible continued in service.

Similar story with the killing in March of Brianna Taylor, a 26 year old emergency nurse who was shot eight times in the course of a night-time police raid on her apartment in Louisville Kentucky :

A black woman was shot dead by police who stormed her home as she slept while searching for a suspect who was already in custody, a lawsuit claims.

The personnel files of three of the officers involved in the Brianna Taylor raid include extensive prior complaints of brutality, and in one case, allegations of the planting of drug evidence. Even when officers are fired for their behaviour, they can – with apparent impunity – be rehired as police officers in other cities, even within the same state.

For one last and particularly telling example, take the infamous case of Tamir Rice, in Cleveland, Ohio. This 12 year black child was playing with a toy gun when he was shot by police less than two seconds after they arrived on the scene. This was despite the responding officers having been told by the Police radio dispatcher that the gun may be fake, and in the possession of a juvenile.

Timothy Loehmann the officer who shot Rice had not disclosed to Cleveland authorities that he had been fired from a previous police job in a different city in Ohio. His earlier problems had included a mental breakdown on the police firing range, and the official report into that incident had concluded :

Loehmann lacked the maturity to understand the severity of his breakdown on the shooting range. “Unfortunately in law enforcement there are times when instructions need to be followed to the letter and I am under the impression that Ptl. Loehmann, under certain circumstances, will not react in the way instructed,” [deputy police chief Jim] Polak wrote.

Even so and incredibly… Loehmann was ultimately fired from the Cleveland police force not for shooting a 12 year old child without due cause, but for not accurately disclosing his previous employment record.

Each of the cases of brutality generate a media cycle, but then get superseded in memory by the next outrage. The families and communities affected though, don’t have the luxury of forgetting. Tamir Rice, Michael Brown, shot six times in his own home. Eric Garner killed (like Floyd) by a police choke hold, Philandro Castile, shot in his car alongside his girlfriend and their child, by a panicky police officer. These cases are all from within the past six years.

It goes back much further, though. The violent (and non-violent) responses by the black community to police brutality actually span the decades : think of the Rodney King police beating that inspired the riots in Los Angeles in 1993, and of the Watts riots in 1965, the Detroit riots in 1967 and in 1943…all of these protests, riots and subsequent looting owed their origins in individual acts of violence by police – and typically, without any subsequent convictions of the officers responsible. Jeronimo Yanez, the police officer who stopped Philandro Castile because his car supposedly had a defective tail-light, then shot him six times despite Castile’s attempts to calm him down. Subsequently, Yanez was acquitted of all charges.

Point being : the communities now out on the streets have been given every good reason to believe they have no adequate avenues of protection, or any means of obtaining justice. Typically….while dozens of American cities are burning, US President Donald Trump has been busily trying to exploit the crisis for his own political gain, and as a useful diversion from his abysmal handling of a Covid-19 crisis that has so far cost over 100,000 American lives.

To Trump, the Floyd protesters are “ scum” who need to be “dominated.”

Trump threatened to get tough himself and “activate” US Attorney General Bill Barr, CBS said. He urged governors to seek retribution, make sweeping arrests and pass laws against burning flags,…..

In telling contrast, the protests mounted by armed and violent white nationalists have been described sympathetically by Trump as the actions of “very good people.” Despite inflammatory claims by the White House about outside forces orchestrating the events, the evidence from arrest records shows no sign that outside agitators have been a significant factor in the Floyd protests. Some 84-86% of the protest-related arrests in Minneapolis have been of locals.

In fact given how widespread the protests have been across America, why would those fabled “outside agitators” travel interstate to cause trouble, rather than just walking out the door and doing it at home ?

Finally…there has been a striking double standard between the police handling of the Floyd protests, and the passively indulgent way the police handled the armed white militia that poured into the Michigan state Capitol building last month, in protest against the Covid-19 lockdowns. Those demonstrations had been cheered on by Trump :

In 2020, a series of demonstrations by protesters carrying semiautomatic rifles shut down the Michigan Legislature. Aggrieved by public health restrictions resulting from the coronavirus pandemic, and egged on by President Trump’s wildly irresponsible calls to “liberate” states governed by Democrats, some entered the visitors’ gallery of the State Senate and yelled at its members. Others lined up outside the office of Gov. Gretchen Whitmer, who was already the target of death threats.

The Legislature adjourned to avoid further armed protests, unable or unwilling to protect its members. A commission with authority over the Capitol grounds, which was itself operating under threats, decided simply to study rather than to end the state’s ludicrous policy of allowing firearms on the premises.

The Michigan protesters have been compared to everything from terrorists to patriots to, in Mr. Trump’s inevitable words, “very good people.” Those who used weapons to inhibit the business of government are better understood as armed rebels. In this respect, they differ in both motive and objective from the protesters raging against police violence in Minneapolis and elsewhere. The tactics of both groups have unraveled. But the complaint against police violence is against officers of the state breaking the law, not lawfully making policy in the first place.

Exactly. But who would expect this President – who rules by deliberately stoking the fires of division – to provide the country with anything that resembles moral leadership ?

And In New Zealand….

The most violent form of police behaviour in this country continues to be police pursuits. Rarely justified, these pursuits reportedly killed 79 people between 2008 and the middle of last year. There have been others since.

On armed callouts…the Police have said they will be releasing in June their own internal evaluation of the piloting of putting armed police units into the community. That aaide, there is other evidence of the increasing militarisation of the activities of our police force :

Figures released to Stuff show the highly-trained AOS squads are on New Zealand streets more often each year – but their modus operandi is changing. The squads mostly attend pre-planned warrants, and not as many emergencies.

AOS callouts in the country increased between 6 and 9 per cent in each of the last four financial years.

Besides the increase in AOS callouts, the context in which they operate has changed significantly, according to Canterbury’s AOS commander Bryan Buck :

When [Buck] began as Canterbury’s AOS commander, about 80 per cent of callouts were for emergency situations and only 20 per cent were pre-planned. Now, he says that’s “flipped on its head”. He brings that down to two things – serious events changing police risk assessments and more firearms carried by criminals.

It’s a “cultural change” he says – moving from punch ups, to knife attacks and now, gunshots.

That escalation is significant. Apparently, New Zealand is increasingly using the AOS units as a weaponised adjunct to the serving of warrants by police, rather than as a response to armed emergencies originating from within the general population. Inevitably, this trend is taking us down the path of an armed enforcement policy. As in the US, it is the communities that are being hit the hardest by economic deprivation – black and Hispanic communities in the US, Maori and Pasifika communities here – who bear the brunt of aggressive policing.

Footnote One : One small, not very violent incident, but IMO, it speaks volumes. Keep your eye on the guy crossing the road in the white T-shirt.

Footnote Two : Inn the Floyd protests, police have repeatedly and directly targeted physical vio9oence at the. media covering the events. Freelance photo-journalist Linda Tirado has lost the sight permanently in one eye as a result of being hit in the face by rubber bullets fired at her. The Columbia Journalism Review has a good summary article here about the violence that police are systematically directing against the media.