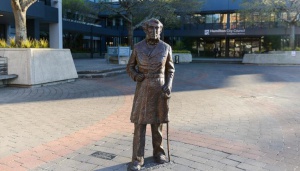 We’re currently in the “phoney war” stage of the 2020 election campaign, before the contest begins in earnest. Yesterday’s release of Labour’s party list rankings has already been picked over – and yes, it is extremely odd that we live in a world where Phil Twyford deserves to be promoted to number four, while Andrew Little is demoted to seven, and David Parker sits at number nine. Obviously that’s not a true reflection of where the balance of power lies in Labour kitchen Cabinet, and it doesn’t even bother to try and look like common sense. What has Twyford done right and what has Little done wrong – especially given that Little has been blindsided (by Winston Peters, no less) time and again on law and order issues. Still, none of it really matters, since they’ll all be back.

Further down the list at a very electable number 18 is epidemiologist Dr.Ayesha Verrall, author of the recent critical report into the government’s early lack of tracing capacity for Covid-19. At the same time, Health Minister David Clark has been dropped from ninth to 17th after his performance during the lockdown period made him an electoral liability. If Labour is re-elected, Verrall can expect to be elevated to (at least) junior ministerial rank, and she would already have a working relationship with Health Ministry director-general Dr. Ashley Bloomfield.

Meanwhile, National Party leader Todd Muller gave a speech this week that once again illustrated just how bare his party’s cupboard of policy continues to be. At this point, National’s entire election pitch is that it will continue to do what Labour’s been doing but will – magically – do it better, simply by dint of being National. Pointedly, Muller harked back to the golden years of John Key, Bill English and Steven Joyce ( oh, how we all miss Steven Joyce !) as if that era hadn’t left the country ( and its public health system) with huge social deficits, failing infrastructure and an inability to cope with the challenges coming down the pike. National is like the deadbeat Dad who always promises to do better, but only in future.

Interestingly Muller didn’t commit himself to delivering tax cuts, National’s s usual election bribe. Of course, this possibility – which he kept open – would be even more irresponsible than usual, given how the Covid-19 recession will make any government struggle to find the revenue to maintain basic services, let alone to have a surplus on hand to dish out in tax cuts. No matter how irresponsible it would be – we would have to be borrowing the money for tax cuts – National’s identity is so bound up with them that it cannot forsake then entirely. Vote for National and we’ll deliver tax cuts in oh, about 2024 is probably the best that it can manage.

As for the Greens, they continue to sail close to the 5% MMP survival line, but without offering their supporters any compellling reason to rally to their banner. It might have looked like fancy footwork for co-leader James Shaw to decline to rule out working with National’s new leadership, provided that National adopted a series of policy positions it would have no interest in pursuing. Yet the gambit also uncomfortably reminded centre left voters that the Greens of today bear precious little resemblance to the party led by Russel Norman, let alone to the Greens’ earlier, prophetically radical incarnations.

Shaw expressing his personal respect for Muller didn’t help, either. Not coming when National had just promised to pour huge amounts of money into rescuing the previous model of tourism – which you’d have expected the Greens to be attacking as socially and environmentally unsustainable. Centre-left voters would welcome the Greens staking out some meaningful territory to the left of Labour. But – apparently in the interests of keeping up the facade of coalition unity – that’s just not happening.

For the winners, history isn’t the outcome of a contest of wills, and thus always open to further challenge. To the victors, there is usually only one authorised version of history, and the passage of time has lent it a halo of authenticity. However, for anyone on the receiving end of history – and sometimes, generation after generation has been forced to live with the consequences – the balance of power enshrined in a country’s founding narrative should always be ripe for re-negotiation. In the process, the toppling of the occasional Victorian statue isn’t at all like blowing up the Bamiyan Buddhas. For one thing, it isn’t quite that easy to rewrite history, and to erase its effects More to the point, the effort of reconciliation can be fruitful for everyone involved. As Taylor Swift said recently about the process of removing the statues of racist generals and politicians from her home state :

“Taking down statues isn’t going to fix centuries of systemic oppression, violence, and hatred that black people have had to endure, but it might bring us one small step closer to making ALL Tennesseans and visitors to our state feel safe—not just the white ones. ”

Exactly. And although they have been given ample reason, indigenous people are not the only ones who can feel driven to challenge the ruling narratives of history. The British Establishment for instance, famously knows how to hold an historical grudge. For example, when Oliver Cromwell died, the royalists had never forgiven him for defeating the monarchy and executing Charles I. So… they had his remains exhumed, posthumously executed him, cut off his head and stuck it on a pole. Even by the 20th century, when Lord of the Admiralty Winston Churchill wanted to name a warship the Oliver Cromwell, King George V vetoed the idea – reportedly because of his “personal feelings” about Cromwell, and because celebrating Cromwell might further inflame the Irish, nearly 300 years down the track.

In other words, there’s nothing very new about the actions against statues and monuments in the Confederate South, or in Hamilton.New Zealand. Nor should we be all that surprised if some of the victors might be wondering what all this fuss is about. For them, the outcome of history has – literally – been written in stone, and belongs in a museum for kids to write about for their school projects. Ironic, really. Many of the people who currently seem most upset about the actions being taken against commemorative monuments have rarely – beyond high school – seemed engaged with even the sanitised version of New Zealand history. Most New Zealanders for instance, who hear the name “Hamilton” tend to mentally associate it with “boring provincial city” rather than with John Hamilton, a British officer killed during the defeat of British forces at Gate Pa in April 1864. (Hamilton managed to posthumously get a city named after him, despite never having set foot in it.)

Ultimately, the Hamilton statue – and other mementos like the names of cities and streets – do reflect what was once felt to be worth commemorating. Europeans, lately arrived in alien surroundings, were keen to memorialise the celebrities and high achievers in their midst, who were seen to embody what the Victorian era regarded as being sterling values worthy of emulation. Some 150 years later, it may well be time to revisit some of those early decisions. After all, it isn’t accidental that almost every NZ city has a “Wakefield” street ( named after the mastermind of land settlement) or a “Grey” street named after the Governor who oversaw the land confiscations, and became so popular with the European settlers as a result that they made him Prime Minister. Conversely, not many places in New Zealand have been named after his tragic predecessor Robert Fitzroy, who had been more even-handed when adjudicating between Maori and the European settlers.

Fitzroy had run afoul of the settlers for instance, by refusing to punish Ngati Toa for their part in the Wairau Incident in 1843. A year later, he also passed into law the Native Exemption Ordinance that briefly tried to incorporate Maori custom into law enforcement. Settler hostility saw Fitzroy recalled to London with barely a trace left behind, beyond the odd street name and a suburb of New Plymouth. Point being: ideological choices have always gone into how we went about commemorating even the European luminaries of 19th century New Zealand, let alone Maori and the events affecting them. Moreover, those choices were meant to be instructive – so we can hardly complain if some of us may now want to challenge the premises that governed those early moral choices. To borrow, Giovanni Tiso’s wisecrack, we all need to know more about why we ended up with the particular statues quo that still dot our public landscape.

In an ideal world, the statues – and their removal – wouldn’t be ends in themselves, but would be merely the kick-off point for a re-examination of the past in the light of its lasting effects. Yet anger needs an outlet, and better it should be directed at an inanimate object. In 1995, when Maori land protesters at Moutoa Gardens in Whanganui decapitated the statue of John Balance, one could understand the sense of grievance behind the action, just as those British royaiists had felt moved to violate the remains of Oliver Cromwell. Unfortunately though…. behind the rage at the statues is a similar sense of impotence that history has been written, the damage has been done, and not even retrospective rage can undo it. Yet if anything, that should provide us with added motivation. Rather than worrying about losing “our” heritage, maybe we should be more worried about perpetuating some or its worst features.