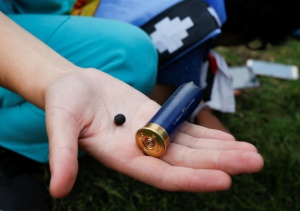 Terminology can be SO important. Back when “non-lethal” bullets were first invented and became part of the weapons array available to US Police, they were called “ rubber bullets” rather than say, “plastic bullets” because “plastic” sounded hard and “rubber” sounded soft, like a Rubber Duckie. Either way, the aim was to dilute the images conveyed by the word “ “bullets.” Police firing bullets randomly at crowds of (usually) unarmed citizens doesn’t sound all that good, right ? Hey, but don’t worry they’re only rubber. Play time stuff that actually conveys a sense of Police withholding violence, by not firing real bullets.

In similar vein on RNZ this morning, we learmed that Police have been trialling “sponge bullets” – which if anything, is an even more innocuous term than the rubber bullets that have been getting a bad press lately, in the wake of the US Police response to the George Floyd demonstrations. Who would ever worry overly about someone else being being hit with a sponge, dry or wet? A sponge bullet doesn’t sound like something able to break your jaw, blind you permanently, cause concussion or smash your teeth now, does it? As Waikato University criminologist Juan Tauri says, the sponge bullet term is a misnomer.

What does this “trial” by NZ Police of rubber bullets share in common with the related “trial” this year of the now-abandoned Armed Response Teams (ART)? Well, both reflect (a) the increasing militarisation of Police forces in the US and other developed countries and (b) the likelihood these new tools of the trade will be deployed mainly against communities of colour. The experience of colonisation, past and present has taught those communities that the Police are far more likely to act as a brutalising force of occupation than as a protective shield. For many people living in those communities, it is hard to imagine the circumstances in which rubber bullets and armed police units would enhance their security, and dead easy to imagine the circumstances in which they would pose an increased threat to it.

In the face of widespread public opposition, the Armed Response Teams (which would have marked a major step towards the arming of all NZ Police officers) have been scrapped. However, it seems that “sponge” bullets are being routinely carried by the Armed Offenders Squads, and by the Special Tactical Group, and have been “under consideration” for wider tactical use, but are not currently to be made available to Police officers, in general. Obviously these distinctions are still open to review, in future. In the meantime, some old distinctions are being steadily – blurred in that the AOS teams are no longer in the main, a re-active force. As this column pointed out last week, the deployment of Armed Offenders Squads has shifted significantly from their original purpose (as a response to armed emergencies) to where they are now a common adjunct to searches where a warrant has been issued.

As usual. talking to former Police officers – as RNZ did this morning – provides some useful insights into the thinking behind the embrace of quasi-military technology. Here fpor instance, is how former officer and crisis negotiator Lance Burdett described the contexts in which “ sppnge bullets might be a good idea – alongside other possible additions to the Police armoury like a long distance taser without wires or a net that’s “ similar to a deer net”….

They [sponge bullets] could be used in a number of situations. I’m thinking possibly….first of all they could be used where communication hasn’t worked. So it could be used in large crowd situations. Although looking at large situations you’d have to have a number of them being deployed and then you’re getting into circumstances which is ( sic) probably out of control. I can certainly see them being used in prisons for example, where [there’s] nothing to lose, I guess. In situations where you can’t get that close to somebody to deploy a taser,,,

And the effect on the person hit by a sponge/rubber bullet? “ It would hurt like heck, but it certainly wouldn’t or shouldn’t cause any damage.” Really?. Tell that to Linda Tirado.

Overall, Burdett liked this trend of the Police being willing to trial new gear and modes of operation : “I’m liking the way they’re trying other things.” Keep in mind, that the way this trend is usually described it involves the increased “militarisation” of the Police. That isn’t simply a metaphor. A relevant consideration is that AI is being used to mechanise the modern battlefield in order to minimise casualties among the soldiers themselves while maximising their ability to control the grounds of combat. This is scary.

It is also the direction in which a militarised Police would be heading, in tandem. Some US politicians have already been claiming (in the wake of the Floyd “ Black Lives Matter” demonstrations) that US cities comprise a “battlespace” that needs to be “dominated.” New gear can always be rationalised in such contexts as a means of keeping police officers better “protected.” More often surely, we should be trialling how better to protect communities. Unfortunately, this should mean finding new ways to protect some communities – and indigenous communities in particular – from an increasingly detached Police presence that’s shying away from social engagement, in favour of being better equipped to deliver force from a distance.

Yikes. And to think that only a few years ago, we used to regard the movie Robocop as a black comedy. Maybe not so much anymore. Not when top former officers are talking of seriously great it is that the Police hierarchy seem willing to trial the new toys that the arms industry is devising for police officers and soldiers alike.

Footnote One. If we’re talking about the anodyne effect of terminology, consider the progress of the humble Police “baton”. It used to be called a “truncheon” until that sounded a bit too much like something used by British bobbies to crack skulls, and “club” sounded even worse. Eventually, we went with “baton” a term associated with relay teams, and marching girls.

Footnote Two. If we’re imagining how a modern Police force equipped with the latest new gear might have operated in the recent past….Try imagining Hamilton 1981 and the famed occupation of that rugby field. Think of what a few rounds of rubber bullets, deer nets and flash grenades might have done to control and disperse that little incident. If only.

Footnote Three. Here’s a brief history and description of what a sponge/rubber bullet is like.

Apparently, they were developed as a weapon in the context of the Troubles in Northern Ireland, which goes some way to confirming their neo-colonial credentials.