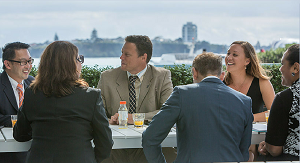 For understandable reasons, the media messaging around Level Two has been all about “freedom” and “celebration”, but this is not necessarily going to be a universal experience. When it comes to workplace relations, Level Two is just as likely to see an increase in compulsion, not freedom. Owners, employers and customers gain more freedom at Level Two for sure : but the work force ? Possibly, not so much.

At best, we will be entering a legal grey zone. Staff will be being asked to assume more responsibility, but with less room for discretion. That’s partly because at Level Two, employers (in the public service, state agencies and private firms) will have extensive power to compel their staff to work in the office. In response, staff will face a high hurdle if they try to cite the risk to their health as a sufficient reason for continuing to work from home.

True, both PM Jacinda Ardern and the MoH have encouraged people to work from home if they can. Point being though, this will be at the employers sole discretion should push comes to shove. At best, workers would need to present evidence of a serious pre-existing medical condition as defined in the era pre-Covid. The unfortunate reality is that some underlying medical conditions (eg asthma) could be safely managed beforehand but with the advent of. Covid-19, those same conditions now pose a potentially serious-to-fatal health risk.

Too bad, for some. Workers would seem to have no ultimate legal protection at Level Two, beyond the usual “ good faith” exhortations and besides employers being officially ‘encouraged” to promote working from home. Oh, and so long as employers meet the “reasonableness” standards of risk management under section 30 of the Health and Safety Act. Alas, what’s “reasonable” in the context of a once in a century pandemic may not be self-evident.

What we need as we prepare to enter Level Two is a ringing pro-active statement from Ardern and/or Dr Ashley Bloomfield that working from home is the government’s strongly preferred option, and that it is their belief that this decision should be a matter for negotiation in good faith, and not for compulsion. In circumstances where working from home is a viable option surely workers should not be faced with choosing between protecting their health or saving their job. That doesn’t sound much like freedom.

To date, neither the MoH nor the Workplace Relations Minister have chosen to urge employers to negotiate this situation fairly and leniently. Surely though, both the government and the MoH have a joint interest in minimising the extent to which New Zealanders are exposed to the higher risks associated with (a) spending long periods in enclosed workspaces with other people and (b) travelling on public transport. Globally, public transport has proved to be the weakest link as other countries try to ease their way out of their lockdowns.

In other words, working from home should be the default position at Level Two, unless a need can be proven otherwise. Given Covid-19, this situation should not be treated as a privilege to be extended and withdrawn at the employers’ whim and discretion. (Unfortunately, the “right to life and security of the person” provisions stated at sections 8-11 of the Bill of Rights are threadbare.)

Here’s another facet of the same issue : should workers have the discretion to wear ( or not wear) a mask in the workplace, or should that again, be at the sole discretion of their employer? The risk is that some firms and agencies could regard the wearing of a mask as a bad look for the brand, regardless of the health concerns of their staff.

The problem is that the existing legal protections via the personal grievance process or (if you’re lucky) stated in contractual terms and conditions do not seem to be fit for purpose in the Covid-19 environment, given the job losses and income insecurity it is generating. The procedures for recourse are too likely to invite retribution, are too slow, and are framed (insofar as they address medical issues at all) for a world of minimal health risk that no longer applies. If anything….as Victoria University employment law expert Gordon Anderson has said, employers are likely to be cut extra slack when matters get to dispute arbitration in the context of the pandemic.

Disappointingly, academia has concerned itself more with angels-on-pinheads discussions about whether the government did, or didn’t, go beyond the legal powers it originally cited as its foundation for enforcing the Level Four lockdown. The MoH has also been of minimal use. In its recent backgrounder on masks, it tiptoed around the powers of employers. The section on “workplaces” is solely to do with advice for those in specialised workplaces, such as pharmacies, supermarkets and prisons. Beyond that, we get only this pathetic sentence: “These recommendations are a guide only and workplace settings should consider their ability to maintain the one metre rule.”

Yep, employers should “ consider” keeping their workers one metre apart if and when they require them to work all day in an enclosed space that may, or may not, have adequate ventilation. Feel the freedom, people.

Footnote : The MoH’s peculiar aversion to recommending the ( voluntary or compulsory) wearing of masks on public transport continues apace. Epidemiologist professor Michael Baker’s advocacy for the wearing of masks in congested public spaces – such as on public transport – continues to be ignored, despite his contention that overseas evidence (from the likes of South Korea and Taiwan) is increasingly establishing the health benefits from the wearing of non-medical masks in certain public locations. Provided of course, this doesn’t displace other good hygiene practices. .

Regardless, the MoH claims that the jury is still out on this issue. Its own actions show that it made up its mind against the public wearing of masks long ago, and nothing will budge it. Its own advice to the immune-comprised for instance, contains this totally unequivocal sentence :

At this time, it wouldn’t make sense for someone who is immune-compromised to wear a mask when in public to decrease risk for catching COVID-19.

Yep, saying that something “wouldn’t make sense” is always a sign of an open mind.

Remember a few days ago, when Foreign Minister Winston Peters was chiding China’s ambassador to New Zealand, and telling her to listen to her boss back in Beijing…., and cease raising concerns about the diplomatically hostile stance that Peters has taken against our main trading partner ? A trading partner and export destination that we are going to need more than ever as our economy tries to recover from Covid-19 ? Here’s the angry response from Beijing yesterday :

Speaking at a daily news conference in Beijing, Chinese Foreign Ministry spokesperson Zhao Lijian said New Zealand’s comments were a severe violation of the “one China” principle, which states that Taiwan is part of China.

“We express our strong dissatisfaction with the statements and resolutely oppose it, and we have already made stern representations with New Zealand,” Zhao said.

This doesn’t mean that New Zealand shouldn’t ever criticise China, but it should pick its fights carefully. It has done so in the past, but – presumably to win redneck votes in the upcoming election for New Zealand First – Peters is picking every fight he can of late. First, he gratuitously aligned us with Australia in its ill-judged call for a probe of some sort by someone, somehow into China’s responsibility for the Covid-19 crisis. Now there’s this fight over Taiwan and the WHO – which he framed in deliberately humiliating terms to the ambassador.

That’s not how the rest of Asia is responding. As this recent article in the South China Morning Post explains,

Other nations in the region have adjudged this to be an issue not important enough to require them to take sides. But it notes that America’s “traditional allies, Australia and New Zealand” have fallen into line behind Washington

Surely, this isn’t the perception of us in Asia that MFAT is trying to foster. Even Canberra has put distance between itself and the Trump administration’s claims that the Covid-19 pathogen was created in a Wuhan bioweapons facility. Again, one wonders what Trade Minister David Parker thinks of Peters’ sudden appetite for goading our most important trade partner.