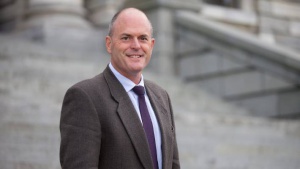 Spin the roulette wheel. The suggestion that tomorrow’s headline poll numbers will decide the fate of Simon Bridges is a fairly extreme example of poll-driven politics. Still, we are where we are. On past evidence, the Colmar Brunton poll is kinder to National than other polls, so what’s the survival line? Is 35% good enough for a thumbs up, or bad enough for a thumbs down once you take the “plus or minus three per cent margin of error” into consideration. The fact that the margin of error may end up saving a politician prone to making erroneous margin calls would be…ironic.

Reportedly, no one in the National caucus (including Bridges) currently enjoys majority support. Since Bridges plainly needs help on the likeability front, here’s a nice picture of him and his dog. But Tilly the dog notwithstanding and if Bridges is to go.. who is likely to step into his shoes? Todd Muller is being mooted. You kmow, Todd Muller. Toddy. No, not the former captain of the Crusaders. Years ago, pundit Matthew Hooton used to deride Jacinda Ardern’s leadership potential by asking “What has she ever done? Name me one thing she has accomplished in politics!” Well, after years of being promoted within National as a guy with leadership potential, can anyone recall one thing that Todd Muller has ever accomplished? Quick quiz : what electorate does Todd Muller represent ? Half points for knowing (before Googling) whether he comes from the North Island or from the South Island.

The excuse commonly made for Bridges is that Leader of the Opposition is the hardest job in politics yadda yadda. Maybe, but its also possible to do that job well – or really, really badly. In the shadow of Covid-19, Bridges chose to make the bad decision to play opposotional politics. He posed as the hard man and champion of business, as if Ardern was wilfully and soft-heartedly sacrificing business in pursuit of public health goals. The public rejected this false dichotomy between saving lives and saving livelihoods. It could readily grasp that protecting health was the best route for saving business as well – and that despite Bridges urging us to emulate what some states were doing across the Tasman, Australia’s economy as going suffer just as badly from Covid-19 as our own economy. Besides, “Be more like an Australian” isn’t a winning slogan here at any time.

Was there an alternative? Yes. How much better it would have been if Bridges had played the national unity card, and put those vaunted business skills at the service of the government at this time of national crisis. One of National’s few remaining cards is that the public still largely believes in the fiction that National is better at managing the economy.

Bridges could have sustained that fiction not by taking on a popular government directly, but by offering up National’s alleged expertise and contacts within the business community, thereby putting Labour in the uncomfortable position of rejecting his patriotic offers of assistance. Basically, oppositional politics during a time of national crisis call for clever forms of asymnetric warfare – and not for the head-on charge that Bridges and his lightweight brigade ( Paul Goldsmith, Michael Woodhouse) chose to mount instead. It was a tactical failure, and one born of an apparently chronic inability to read the public mood.

So leaving aside who will be at the party’s helm by next week, where does National go from here? Believe me, between now and the election on September 19 the phrase that we’re going to hear constantly is – What’s The Plan? Apparently, New Zealand will need to have A Plan For The Economy. In a 25 word soundbite or less, how does the government propose to rescue this country by Christmas from the worst economic crisis the world has seen in the past 90 years….No pressure.

This is National’s only hope. By September, even the rosy optimists at Treasury are predicting the job losses, the unemployment, the business collapses, the economic pain…will all be coming to a peak. What then will be The Plan for recovery? Every attempt will be made by the Opposition to depict an unprecedented international crisis as being the product of decisions being made – or not made – on the ninth floor of the Beehive.

Naturally enough, Simon Bridges, his potential successor and the National Party itself are unlikely to admit that they haven’t a clue either about to get the economy ticking over and everyone back in a job by Christmas. Cripes, that’s mainly because the centre right of New Zealand politics has been claiming for the past 40 years, The Plan Is That There Is No Plan, because things are best left to the infinite wisdom of the market. National will be hoping that the public will – by September – be ready to fall back in desperation on the old canard that National instinctively knows how to run a modern economy. It doesn’t of course. On recent evidence, they degrade public services, peddle distractions ( eg tax cuts) and rack up huge social deficits.

If tomorrow’s poll does happen to cement in the perception that -for now at least – National’s support really is hovering only between 30-35 % then…some interesting apocalyptic outcomes come into the frame. National’s caucus is artificially large for an Opposition team, and it could lose more than a dozen MPs if that pattern persisted until election day. Since National also holds a disproportionate number of electorate seats, there is also a chance that if its poll numbers remain in the early to low 30s, this could mean that no purely list MPs at all get re-elected. That would saying goodbye to Paul Goldsmith, Michael Woodhouse, Melissa Lee and controversial list MP Jiang Yang, among others.

Moreover – as Auckland University politics professor Jennifer Curtin pointed out on RNZ yesterday– National holds only a 4% or less margin in several electorates, including three in Auckland : Northcote, Maungakiekie and the Auckland Central seat of Nikki Kaye, who is currently being mooted as the running mate on a Todd Muller leadership ticket. (Kaye may need Muller so prevail to boost her own visibility and survival chances.)

It isn’t only the centre-right that will be sweating the recent poll numbers. Obviously, New Zealand First is in deep trouble at 2.7% and to a lesser extent so are the Greens, who at 5.5% are on the borderline of returning to Parliament. Normally, the Greens can count on the insurance of the overseas votes that have always been cast very strongly in their favour. But with Jacinda Ardern being such an international superstar, much of that overseas vote will go to Labour this year.

All up…and given the margins of error, there is no margin for error for anyone right now. The one sure thing is that whatever the government comes up with by way of A Plan, it won’t be enough to shield every voter and every community from the pain that Covid-19 is causing . National will be hoping to reap support among the fearful, the anxious and the desperate. Right now, the National caucus knows just how that feels.

One of the problems in reporting on Donald Trump is that the media’s inbuilt deference to presidential authority means that it constantly ends up re-transmitting his constant stream of lies, disinformation and diversions, and thereby helping him out. Good to see then that Vox News at least, has been willing to entertain the likelihood that Trump is lying again when he says he takes daily doses of the anti-malarial drug, hydroxychloroquine.

….Trump may be trying to goad the media into getting bogged down in an issue that’s less important than the actual outbreak and Trump’s failed response to it. At the press conference, he told reporters, “I was just waiting for your eyes to light up when I said this, when I announced this,” indicating he’s perfectly aware that he’s starting a controversy.

It’s been a tough call of presidential behaviour either way :“

Ditto for the media coverage or the White House attacks on the World Health Organisation which seem even less justified than his previous attacks on the World. Trade Organisation, NATO, the United Nations, the European Union and evert other international alliance that imposes reciprocal obligations on Trump’s toxic brand of white nationalism. It works for Trump, though. This week the media dutifully reported the speech by US Health Secretary Alex Azar blaming the WHO for “the cost of so many lives. ” In similar vein, the WHO has obediently agreed to conduct a full and transparent inquiry into its own actions with respect to Covid-19. Mission accomplished! Blame the economy..! Trump is now upping the pressure on the WHO.

If there is wonderment abroad that Trump can still enjoy wide support among Americans, it is partly because of such exercises in media manipulation and international bullying. Neither the media nor the likes of the WHO have adequate coping mechanisms. They will respond by inviting scrutiny when the whole point is the accusation, and not the subsequent findings. Lies need to be rebutted, immediately, not given oxygen.

However, the death toll from the virus among a reliable bloc of Trump supporters – elderly white people – may be motivating their relatives ( and surviving older voters) to cast a more critical eye on his handling of the crisis. Nate Silver’s 538 site goes into this in more depth , and the news looks all bad right now for Trump :

The most startling shift, though, is among voters age 65 and older. Four years ago, Trump bested Hillary Clinton by 13 points, 55 percent to 42 percent, according to the Cooperative Congressional Election Study, a survey of more than 60,000 voters organized by Harvard University and administered by YouGov. But now Biden narrowly leads Trump 48 percent to 47 percent, based on an average of 48 national polls that included that age group.1 If those figures hold until November, they would represent a seismic shift in the voting behaviour of America’s oldest voters.

But it’s not just among voters 65 and older where Trump is slipping. He’s also fallen almost as far among voters 55 and older. Trump is essentially tied with Biden among that age group, even after winning these voters by 10 points in 2016, 53 percent to 43 percent, according to the CCES. Trump’s numbers have also fallen with 45- to 64-year-olds, as well as 50- to 64-year-olds (an alternate category employed by many pollsters), but the last Democrat to win 45- to 64-year-olds was Barack Obama in 2008 — albeit barely, 50 percent to 49 percent.

Early days of course, and keep in mind that these are national polling numbers, and not the state-related ones weighted for the Electoral College outcomes. Yet for now, Biden’s support among (older) voters is a positive sign that the Trump nightmare could soon be over.