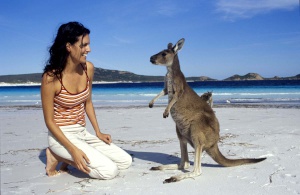 Arguably, one of the more irresponsible things the government could do right now would be to throw the doors wide open to non-essential travel next week at Level Two – as the tourism industry is demanding. Such a decision could easily crash our newly minted system of contact tracing, just when the shift to Level Two will be putting its national capacity to the test. Could the country really rely on hard-pressed tourism operators to run their own effective systems of contact tracing of their customers? Hmmm. This is not an industry that’s exactly world-renowned for its safety record. (See : Carterton ballooning, Fox Glacier scenic flights.)

Yes, jobs and firms will be put at serious risk if non-essential travel continues to be ruled out at Level Two. Unfortunately, that’s not sufficient reason to make the rest of the country play Russian roulette with the virus. Also, even if open slather for tourism was allowed at Level Two, there would be no guarantee that a sufficient number of punters would be willing or able to take holidays right now – so the risk exposure for everyone would be ramped up, yet without this generating the levels of demand sufficient to save the jobs and firms in question.

At some point the tourism industry is going to have to face reality, and stop blaming its bleak outlook on decisions being taken by central government As PM Jacinda Ardern has already indicated to the tourism industry, it needs to be planning for a world where international and domestic tourism is unlikely to recover for quite a long time.

Turn Off the Bubble Machine

There have been other over-hyped business stories during the past week. A few days ago, it was big news here when Ardern dialled into Aussie PM Scott Morrison’s Cabinet meeting to advance the notion of a ‘trans-Tasman bubble’ involving shared economic activities, including tourism. At the subsequent press conference however, Morrison ignored the subject in his own initial comments, and mentioned the trans-Tasman bubble concept only when journalists asked him about it.

Conclusion : it won’t be happening anytime soon. With hindsight, the whole idea looked more like a media concoction cooked up to divert criticism that the coalition government isn’t doing enough for business. As if it ever could. As we all know, only a National government can calm the fevered brow of business, and tuck it safely into bed at night.

Sorry for the Bob Dylan pun, but in similar diversionary vein, the coalition government also made a very big deal out of Microsoft’s decision to locate a data centre in Auckland for its Azure cloud services. Excitedly, the government touted this decision as evidence of international recognition for everything from our Christchurch Call initiative against Internet extremism to the way we’ve handled the Covid-19 crisis.

Well….not so much. At last count, Australia is home to four Microsoft data centres, two of which offer Azure cloud services. They’re nice to have, but not that big a deal. Reportedly, the proposed Microsoft office in Auckland would be the 60th localised data centre that Microsoft has opened around the world.

In fact, the decision by Microsoft to open up shop here seems to have been triggered less by global factors than by our own national sovereignty concerns. Recently, our Parliamentary Services refused to proceed with the final rollout of an Office 365 system whereby sensitive parliamentary data would have needed to be entrusted to a Microsoft cloud-based data centre located in Australia.

The reason for the reluctance being….the recent Aussie legislation that requires tech companies to provide Australian police and security agencies with access to any and all encrypted communications that they might want to access. We baulked at that hurdle, and Microsoft has now removed the risk. Or has it entirely ? In future, would a NZ firm that enters into a joint venture with an Australian firm subsequently find that the firm’s secrets were still accessible via the ‘back door” by the Australian cops and spooks, regardless ? There will need to be some jurisdictional clarity about how cloud security will operate within joint ventures, in the light of that Australian legislation.

Hopefully, when Microsoft does build its new centre here, a similar fate won’t befall our secrets as what happened in Australia. In 2017, the Australian Defence forces found they had to shift all their secret files – quickly and at a reported cost of $A200 million – out of a building into which a Chinese corporation had bought a half interest, overnight. But that’s the upside of living next door to those brash Australians. They make a lot of mistakes, and we don’t need to repeat them.

Talk about the charge of the lightweight brigade. Yesterday, National Party leader Simon Bridges dd his best to tear into Ministry of Health Director-General Dr Ashleigh Bloomfield, but with less than stellar results. Amid the frenzy of ankle biting, Bridges repeated the argument that the Australians have provided a superior example of how to manage the Covid-19 lockdown. Supposedly, Australia did better by shutting down fewer parts of – for example – its retail economy.

In reality though, the absence of foot traffic meant that retail being theoretically “open” made little actual difference. Reportedly, downtown Perth, Sydney and Melbourne still looked like ghost towns, regardless. People embraced social distancing and retailing bore the effects. Moreover, if economic performance is the main yardstick of success for Bridges…where is his evidence that the Australian economy is likely to fare any better from the lockdown? The Australian economy gives every sign of being hit just as hard by the pandemic as our own economy has been and the IMF predictions for their economy – a nearly 7% contraction – say as much.

Perhaps that shared economic misery is because of something else we share in common with the Australians : a lopsided dependence on China, and on its tourists, investors, and fee-paying students. Plainly, any trans-Tasman bubble that finally materialises will have to work overtime to make up the difference. As an aside, the bell curves in the graphic below provides a striking endorsement of the ‘elimination’ approach to the Covid-19 threat taken by the Ardern government. Clearly, we have put in place the same measures – an early hard lockdown, and strict travel restrictions that apply even internally – and have enjoyed amazingly similar successes as the nations doing likewise. 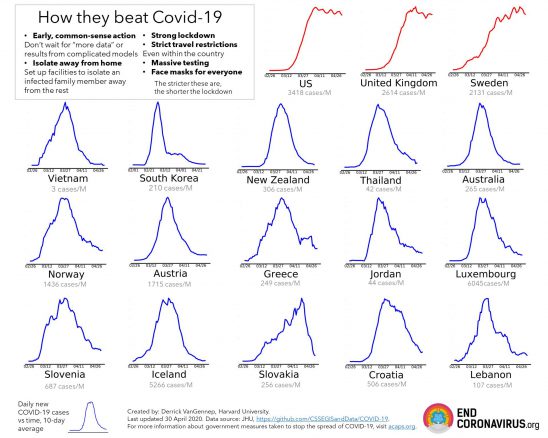 Conversely, in those nations that have taken a more open ‘mitigation’ approach (the US, Sweden) the cost in lives per capita has been far higher, and with still no sign that the virus is being brought under control.

Finally, and as mentioned in yesterday’s column, the reluctance of our MoH to support the public wearing of masks increasingly makes New Zealand a global outlier. This is especially hard when the rationale offered by the MoH experts implies that Kiwis are basically too dumb to wear their masks safely, without fiddling with them and thereby causing the risks to outweigh the benefits. The citizens of other countries seem to manage just fine. In Germany, cloth masks are compulsory as it emerges from lockdown,

Moreover, on RNZ this morning Otago Medical School epidemiologist professor Michael Baker pointed out how the compulsory public wearing of cloth masks in Taiwan – widely seen to be the best global success story in the battle against the virus – is the one big difference between our approach, and theirs. Wearing masks in public spaces indoors (including on public transport)

should now be made a mandatory condition of our move to Level Two. Unfortunately, the foot dragging reluctance of the MoH to advocate even the voluntary wearing of masks is going to make any sudden shift to compulsion that much harder to enact.

Note : PM Jacinda Ardern has announced at 1pm today (Thursday 7th) that domestic travel will be allowed to recommence if the Cabinet decides on Monday to shift New Zealand to a Level Two Alert.