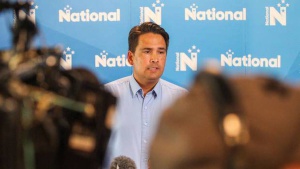 As countries around the world tentatively emerge from lockdown, a lot of political noise is being generated by politically-driven arguments that (a) the safeguards need to be lifted faster and (b) the lockdown itself was an over-reaction likely to leave lasting economic damage in its wake. In other words…the success of the lockdowns (in saving lives) is being cited as evidence that the risk was overstated, and the preventative measures taken were unnecessary. Somehow, the economic pain resulting from a global pandemic is being blamed on decisions made by the New Zealand government.

Not many people are buying it. If overseas evidence is anything to go by, the New Zealand public will reject both of the two much/ for too long messages. Cpvid-19 has killed nearly 250,000 people worldwide, and there’s no reason to think New Zealanders would be magically immune from the virus, or that our public health system wouldn’t have been overwhelmed by a more easygoing attitude to the virus. The news this morning that Southern District Health had upscaled its ICU capacity from only two beds pre Covid-19 to a maximum of 32 ICU beds right now, is a sign of how thin our public health defences against Covid-19 continue to be.

Secondly, the attempts by National Party leader Simon Bridges to exploit public anxiety (about jobs and economic security) for political gain has been deeply unpopular with the public. There’s a reason why National has been plummeting in the polls – and it has had a lot to do with how National and its current leader have responded to the existential challenge facing this country. It isn’t a time for petty point scoring. This is an international public health crsis and a global economic shock on a scale not seen for decades. Obviously, it is something being generated by decisions taken on the ninth floor of the Beehive. After all, the countries that National has been pointing to as alleged examples of where a better fist has been made of managing this crisis – eg Australia – have had higher rates of hospitalisation, while taking just as severe a hit to their GDP figures, amid similar job losses and rising unemployment. There’s no evidence that having easier trading rules during their lockdowns has worked to Australia’s comparative economic advantage. (While more retail outlets were theoretically open, reportedly there was little or no foot traffic to support them. )

Despite the political noise about lifting/easing the lockdowns, it has been striking to see the levels of public support for them. In the US, gun-toting right-wing extremists may have earned themselves a ton of media coverage for their armed hostility to the lockdowns, but they represent only a small minority of US public opinion. Reportedly, opinion polls have shown that 81 % of Americans have supported an extension of the lockdowns.

Similarly in the UK, a majority of Britons have been strongly opposing the lifting of the lockdowns. At least one major British newspaper has been accused of misreporting the poll results in order to assist the Tory government’s agenda of easing the lockdown. In Germany however, there is some evidence that the formerly strong public support for social distancing is now ebbing away.

Interestingly, some of the factors being cited about the erosion of support for the public health warnings have brought some of the less attractive aspects of Germany’s national character to the fore :

Rather distastefully, Boris Palmer of the Greens party recently said that many of the often elderly individuals whom the measures are designed to protect might have passed away soon, anyway. Theatre director Frank Castorf has complained that he doesn’t want “a fretful Mrs. Merkel telling me I need to wash my hands.” And the well-known virologist Christian Drosten reportedly even received death threats for supporting the public health measures.

No doubt, it is frustrating to maintain social distancing and to continue to reduce those forms of economic activity that pose a risk to public health. Yet as the government has made clear, Level Three could well last only until May 11th, when a rational decision will be made as to whether life at Level Three has produced a significant rise in infections. Between now and then though, there will be nothing to stop Simon Bridges from doing his best to stoke public resentment at the restrictions.

Unfortunately, the virus is still out there. We have good reason to expect that the public will continue to judge National severely…. for trying to make political mileage out of the threats the virus is posing to family health and household incomes.

Footnote : Currently, the government’s wage subsidy scheme is cushioning hundreds of thousands New Zealanders from the full effects of Covid-19. Again, the economic impact is global, not merely local : already, the IMF is predicting that the eurozone will contract by 7.5% this year. Germany, the pow4gouse of Europe, may see a 6.5% contraction this year. The economy of China, our biggest trading partner has just shrunk by 6.8% in the first quarter of 2020, compared to a year ago. In Japan some observers are expecting a contraction of over 20% in the April to June quarter. In the UK, the economic contraction is being described by the Bank of England as the biggest “ in centuries.” The US economy sank to a 4.8 % annualised growth to March, but this was before the impact of job losses and unemployment claim filings began to be apparent.

In other words, there isn’t going to be an economic normality for us to return to ( well into 2021 at least) even if we do come out of Level Three in a few days time. Quite soon, New Zealand is going to be facing the chilly reality of an international economy in survival mode, and the ending of the wage subsidy scheme that’s currently keeping many of us afloat.

In normal circumstances, Opposition parties oppose, by rote. That’s what they do. Maybe now though they would be better advised to can the quibbling, and show some readiness to work collectively on ways to respond to the national crisis that this country is facing. It may not have dawned on Simon Bridges yet, but the public wants to see politicians coming up with practical ways to dispel their anxiety. What they don’t want to feel is that their anxieties are being stoked for personal political advantage.

Vaccines update
Here’s a useful (and recent) overview of the state of play with the race to find a Covid-19 vaccine, with a clear explanation of the various types of vaccines being pursued. Overall, the worrying thing is that no-one has ever come up with a vaccine for a coronavirus infection. (The SARS and MERS coronaviruses never ended up with a vaccine to combat them.) Still, one has to be optimistic….especially in the light of the huge research effort and unlimited funding that’s being thrown at Covid-19. But doubts are being expressed about whether this effort will be successful, let alone widely available anytime soon. Since we’re talking billions of doses, global shortages are even being predicted by the Gates Foundation when it comes to the sand and glass required for all the vials needed to transport the vaccine.

Entangled with the vaccine search is the ongoing lack of clarity over the role ( and extent) of the antibodies generated by Covid-19 infection, and whether ( and at what level) those antibodies will generate immunity against subsequent re-infection. The WHO put it this way om April 24 :

At this point in the pandemic, there is not enough evidence about the effectiveness of antibody-mediated immunity to guarantee the accuracy of an “immunity passport” or “risk-free certificate.

Almost immediately though, the WHO’s Twitter account walked back that statement and adopted a more qualified position that maybe some immunity existed, but how much was currently unknown. That’s roughly where we are right now. Currently, we still lack a reliable, readily available test for the presence of antibodies, and don’t have definitive findings on what level of them will deliver a relatively safe degree of immunity. Thankfully, there is no sign yet that the virus is mutating into significant new strains.

As a result of these ambiguities though, we will probably need to work out lifestyles for ourselves that will enable us to co-exist safely with the virus for (possibly) years to come. Social distancing is likely to be here to stay. That’s if saving lives is to continue to remain a higher priority than enabling a certain level of economic activity.