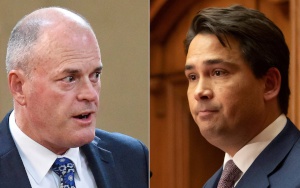 Chloe Swarbrick is number three in the Greens Party list released this morning. Todd Muller has released his new party line-up today, which will excite everyone who still wants to know what Gerry Brownlee and Judith Collins will be up to in future. Wider point being : Swarbrick is a household name after three years in Parliament, and has been steering our cannabis laws towards a national referendum at this year’s election. Todd Muller has spent twice as long in Parliament as Swarbrick and yet – until last week – no one beyond his immediate family and friends had ever heard of him.

That’s a worry, or it should be to anyone on the centre-right. In its time of need, National has swapped a gratingly unlikeable leader for a middle manager whose key credential for the job seems to be his affable inoffensiveness. (In Simpsons terms, National has swapped Monty Burns for something much closer to Ned Flanders.)

Buyer beware. In the past, Muller’s adviser Matthew Hooton used to repeatedly belittle Jacinda Ardern’s credentials for leading the Opposition by asking – what has she ever achieved in politics?, At the time, Ardern had spent her entire political career on the Opposition benches. Well, Muller has failed the Hooton Test by managing to be almost invisible – without legislative initiatives of his own and devoid of a public profile – after spending six years in Parliament, and three of them in government.

Backwards Into The Future

Regardless, the media is being extremely kind to Muller. So far, it seems to have bought hook, line and sinker into the National Parry messaging that National is a more competent manager of the economy. In reality, there is not a shred of evidence to support that claim,, and a lot of historical evidence to contradict it. Starting with….If this is the new Great Depression, keep in mind that it was the centre-left -= in the USA and New Zealand alike – that got us out of that hole in the 1930s. The centre-right’s economic policies ( of Herbert Hoover, and of Coates/Forbes) only dug that hole even deeper.

Since the Muldoon era National has never, ever been a policy innovator on how to run a modern economy. Ruth Richardson followed in the footsteps of Roger Douglas and Michael Cullen created the template for paying down government debt that Bill English continued. Currently, both Muller and Act leader David Seymour are stoking fear and anxiety about the coalition government’s borrowing and debt levels, even though borrowing is the standard mainstream response to external shocks. Every responsible Finance Minister has done likewise, including Bill English..( See for example the NZ Herald May 18, 2011 headline “ Govt Will Borrow To Cover Quake Bill.” )

Yes, National borrowed to cover the Christchurch earthquake response ( it if hadn’t wasted money in the 2011 tax cuts it wouldn’t have needed to borrow so much.) This time, the external shocks to New Zealand jobs, growth, and the wider economy are far, far greater. That’s why the borrowing programme has been bigger. Thankfully though, we seem to be in good hands. Moodys rating agency for instance, has just endorsed the coalition government’s response to the Covid-19 crisis.(See “Govt Debt Levels Position NZ for Covid-19 Recovery, Ratings Agency Says.”)

Moody’s said the Government had a large degree of fiscal headroom to increase spending in coming years to support the recovery. While this would lead to higher debt and fiscal deficits, Moody’s said the commitment to responsible fiscal management meant this was manageable.

That “ fiscal headroom” Moody’s cites is a reference to the $20 billion fund that Finance Minister Grant Robertson has set aside to deal with any unexpected events that could arise from Covid-19 over the next five years. National has done its best to paint this safety buffer as an evil slush fund. (Long term contingency planning has never been National’s forte. )

Ultimately, Moody’s endorsement will provide a useful shield for the coalition. On the campaign trail when Muller and his team ask“ Where’s the Economic Recovery Plan?” the coalition government will be able to respond : “ It’s the one that just got an Aaa rating from Moodys rating agency, Todd.” It always helps to be able to use the centre-right’s own minions against it.

Long term plans
One unexpected achievement of Covid-19 has been the way the virus has served to entrench state capitalism, all around the world. Given the virtual collapse of domestic and international markets, Big Government has inevitably expanded its role. In country after country, the state has become the one essential prop for society and for business, has maintained the only reliable welfare safety net, and looks like being the prime engine of economic growth for the foreseeable future.

For business, large and small, this shouldn’t come as much of a revelation, let alone as a revolution. Market forces were always treated by employers as being salutary for other people, but not so welcome when applied to oneself. Pre-Covid, firms may have been keen to expose their rivals ( and their staff) to the bracing forces of the market. Yet to protect their own health and wellbeing, employers in New Zealand have tended to look fondly towards a benign (National) government for support, and a sympathetic ear when regulation impinges on activity.

Covid-19 has been a wake-=up call. It has delivered a rough reminder that capitalism can be a tough game, even for the well-connected. Since 2017, we’d seen from the business confidence surveys that employers had never really accepted the change of government. Business feels instinctively paranoid about centre-left governments. Heaven forfend that the winds of the market be allowed to blow in their direction.

Covid-19 has starkly exposed this double standard.. Yes, we may be facing the biggest international economic crisis since the 1930s, but many New Zealand firms – especially in the tourism industry –continue to complain loudly and publicly that the coalition government has a virtual obligation to intervene and protect them indefinitely from the market forces they had so enthusiastically promoted in the past.

Right now, there doesn’t to be much appetite for accepting the inherent risk of doing business. Basically, we’ve seen firms privatise the profits available to them over the past decade. But now Covid-19 has arrived, and the expectation seems to be widespread that the risk of doing business should now be socialised, via government handouts extended in perpetuity. There’s a pattern involved here. According to the OECD average, relatively few NZ firms invest adequately in their own research and development, costs which they much prefer to have funded for their personal gain, by the taxpayer. As Covid-19 has shown, even fewer firms had set aside profits sufficient to ensure their own survival in the advent of a pandemic.

This gap between the “certainty” that business demands for itself and the Darwinian uncertainties that it advocates for everyone else offers fertile electioneering ground for National’s new leadership. At the best of times, it is dead easy to stoke fear, anxiety and resentment in business circles towards centre-left governments – and even against the ones that offer r&d tax breaks and that seek to plump the pillow of business at every turn.

As generally agreed, the virus has created a once in a century economic crisis. To succeed in September, National has to ramp up anxiety about the magnitude of this threat, while simultaneously downplaying it as fixable by merely a few judicious application of its own magical economic potions. National is desperate to sell small business in particular on this fantasy – and the desperation springs partly from the fact that it has just chosen an undistinguished political novice as its salesman in chief.

Hate to be a pessimist, but putting this kind of faith in National’s ability to manage the post-Covid economy makes about as much sense as believing cellphone towers cause Covid-19.

Footnote : Also : on the weekend, Todd Muller made the breath-taking claim that in times of crisis, the public turns to National. Really ? This would be the same National Party that – when departing office only three years ago – left us with a legacy of huge social deficits in health, education and housing, crumbling transport infrastructure, degraded public services and a public health system that had received a declining share of GDP in every year since 2010.

As a result, the health system was severely un-prepared for the Covid-19 crisis, in everything from stocks of PPE gear to adequate nursing and specialist staffing, to ICU beds etc etc. Luckily, the coalition government prevented the extensive loss of life that the prior decade of National false economy had set us up to experience.

Finally….there’s a very good reason why (a) firms are able to re-open right now, and why (b) customers can patronise them with relative confidence. It is because the policies enacted since the crisis period began in March have – for now at least – eliminated the virus. Under different leadership, we may not have been so fortunate. It is significant that throughout this crisis, National has signalled that it would have (a) promoted less stringent economic conditions and (b) ended the lockdown earlier, thus running a higher risk of virus outbreaks. Obviously, this would have eventually been to the detriment of business activity, as well as to public health.

No doubt, Todd Muller is a nice chap. But he and the party he leads have no credibility when it comes to steering New Zealand through a serious economic crisis. National’s economic policy solutions – a smaller role for government, widespread business de-regulation, swingeing reductions in social spending, budget balancing as an end in itself, tax cuts that disproportionately benefit the wealthy etc etc – belong to a bygone era. It is a policy mix that had been discredited all around the world, well before the virus hit.

Even more to the point, National’s policies of starving the public health system left us extremely vulnerable to the current crisis. By luck and by good management, we have survived. In September though, the choice should be a no-brainer.