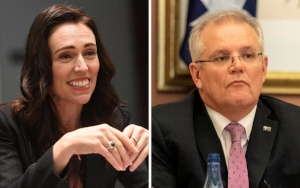 On today’s Coronocast podcast on the ABC state broadcasting network in Australia, New Zealand’s policy of going out hard early with a stringent economic shutdown was being held up by medical expert Dr Norman Swan as a model that Australia should have followed. (Swan has become Australia’s equivalent to Ashley Bloomfield, as the re-assuring face of the public health response to Covid-19.) As Swan went on to explain, New Zealand’s approach has had more in common with the successful strategy adopted by countries and territories in Asia – Taiwan, South Korea, Hong Kong and Singapore – that routinely get cited as global models for how countries should be responding to the virus.

Those countries in Asia, Swan continued, had the benefit of prior experience with the SARS epidemic a decade ago. Armed with that knowledge, they enacted a hard shutdown of the economy early, combined with strict border controls and extensive testing and tracing. One can criticise how well the testing/tracing and border control regimes have been put into effect here – but the general approach we’ve taken has been entirely sound. (It should also be kept in mind that some epidemiologists have been sceptical that Australia’s testing regime has been entirely up to scratch, too.)

The wider point being…there is little justification for the emerging critique here that our government should have followed the example of Australia, and softened the shutdown from the outset. There is little in the way of a medical rationale for doing so. Per capita, Australia’s approach has cost more lives – 61 deaths as of 13 April, compared to 9 here as of yesterday. At last count there were 378 people in hospital over there compared to 15 in New Zealand, when their population is only five times as large.

Admittedly, this is a crude comparison. Arguably, larger populations are exponentially more likely to produce higher rates of infection than a strictly linear comparison would indicate. But to repeat : the successful precedents in Asia ( and from the likes of Denmark) all tend to support the way that New Zealand has tackled this problem, and not the way that Australia has chosen to proceed. As Swan says, you don’t treat a virus as you would influenza, where the public health response gets gradually ramped up. With a new virus, you go in very hard early, to break the chain of transmission. That’s exactly what New Zealand has done.

Ironically, it may be the relative success of our approach to date that has now enabled some politicians and commentators on the centre-right to portray our approach as overkill, since hey, so few people here have got infected and died, at great economic cost. Well, duh. The main economic costs ( to tourism, to trade) are global, not local. The good medical outcomes to date are because we went in hard early and shut everything down. Australia didn’t, and has paid a price in a higher death toll, and in higher rates of hospital admission – in return for a dubious advantage (see below) when it comes to the resumption of economic activity.

Ultimately, it is bizarre to find some of our politicians citing Australia as a success story, when – over there – they’re looking in envy at our approach, and clearly articulated leadership. It isn’t all that surprising to find some local politicians willing to argue that New Zealand – and by implication Taiwan, and South Korea and Singapore – has got it wrong. In the past, the economy has been the only god they worship, and if it now demands human sacrifice, then so be it.

Footnote One : Local fans of Australia’s response appear to be selectively ignoring its shortcomings, and the very similar challenges that the federal government is now confronting. On Monday, Canberra was dealing with much the same model scenarios of GDP contraction and job losses as our Treasury released yesterday, and with a similar likelihood of unemployment rates of at least 10%, and in worst case scenarios, of around 20%. Also, Australia’s $130 billion JobKeeper wage subsidy scheme and JobSeeker package of income support has taken a relatively long time to put in place, compared to the speed with which New Zealand has paid out similar supports.

Also, fans of a quick reversion by New Zealand to business-as-usual are out of step with what Australia’s leaders are cautioning. On Monday, PM Scott Morrison was warning Australians about the perils of emerging from lockdown prematurely :“We can’t get ahead of ourselves. You’ve got to look at places like Singapore and Sweden where the virus has just taken off again. We can’t have that happening in Australia. …I wouldn’t want to mislead. We have many weeks to go on this [lockdown.]”

Footnote Two : The economic argument is that by limiting the extent of its economic shutdown, Australia has better positioned itself to bounce back again once the crisis has abated, and business activity resumes. A detailed argument along those lines and in favour of Australia’s approach can be found here. However – and even setting aside the mortality rates and the hospitalisations – such arguments make some quite heroic assumptions that business activity will resume much as before. If that gamble fails, we will have run serious health risks for little in the way of economic returns.

Indeed, all the signs are that heady optimism is likely to be unfounded. The rates of unemployment and the ongoing anxiety about the threat posed by the virus is not going to see the demand side of the economy resume in any sustainable way, once the brief retail bounce after the lockdown lifts has come and gone. Unless the virus is felt to be under control, demand is likely to remain skittish and spasmodic. Meaning : Australia’s alleged ability to resume normal activity more quickly may prove to be only theoretical.

It is going to be a long and gradual slog back to anything that looks like prosperity. This week, the IMF predicted a bad outcome for Australia, and for global trade all the way into 2021 – and concluded that public health goals would need to be prioritised for the foreseeable, lest the economic recovery be delayed for even longer :

[The IMF report] assumed the pandemic would fade over the second half of 2020 and containment efforts will be gradually unwound, allowing the global economy to partially bounce back in 2021, to grow by 5.8 per cent. However….much worse growth outcomes are possible.

“Strong containment efforts in place to slow the spread of the virus may need to remain in force for longer than the first half of the year if the pandemic proves to be more persistent than assumed in the World Health Organisation baseline.

Moreover, the IMF warned, re-infections may well occur, and even in those places where community spread seemed to have been effectively reduced :

“In such instances, public health measures will need to be ramped up again, leading to a longer downturn than in the baseline forecast. Effective [public health] policies would be needed to forestall worse economic outcomes. Necessary measures to reduce contagion and protect lives will take a short-term toll on economic activity but should also be seen as an important investment in long-term human and economic health,” it said. “The immediate priority is to contain the fallout from the COVID-19 outbreak, especially by increasing health care expenditures to strengthen the capacity and resources of the health care sector, while adopting measures that reduce contagion.”

In short, the question is not whether New Zealand has reduced economic activity too much for too long. It is whether New Zealand is about to emerge from its lockdown too comprehensively, too soon. If so, the economy will be only one of the casualties.