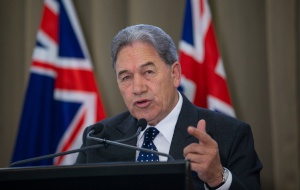 Deputy PM Winston Peters has kept a low profile over the last month or so, partly because he belongs in the category of people most at risk from Covid-19. Peters turned 75 earlier this month, and towards the end of last year he was reportedly, laid low with a serious infection after a serious operation. Perhaps as a consequence, Peters has not been in Wellington at any of the Covid briefings, and spent the entire Level Four lockdown on his property in Northland.

So…yesterday’s speech by Peters about this country’s foreign policy response to Covid-19 had several purposes in mind. Primarily, it helped to dispel any “Where’s Winston?” sentiments during this time of national crisis. All along, it seems that he’s been playing a behind-the-scenes role that’s been marked by ‘highly dynamic diplomacy’, no less. Peters also used his speech to assume his usual underdog stance, by portraying himself as resisting early Ministry of Health advice that this country should consider closing its borders entirely, even to its own returning citizens. No way. Jose. Not if Peters had anything to do with it :

These decisions were neither straightforward nor without debate. Indeed, the Ministry of Health recommended a total shutdown of the border, including to returning New Zealanders.From its health perspective this was understandable and appropriate advice. But the Coalition Cabinet rejected that advice because it was and is inconceivable that we will ever turn our backs on our own.

Yep, Winston Peters can be trusted to always put New Zealanders First. To that end, he’s apparently been working his 75 year old butt off, taking calls from 23 fellow Foreign Ministers from all around the globe, “ from the very first call with China’s Wang Yi, to the latest with Prime Minister Marape from PNG” …He’s been heading a 400 strong MFAT team “working three shifts” in a 24/7 emergency response effort! He’s been captaining a crew of “60 ambassadors, High Commissioners and Consuls-General” involved in helping New Zealanders spread across 150 countries! It has been “the largest and most important consular operation” in MFAT’s “storied 77 year history !” etc etc.

You get the drift. The general public may have been diverted by its 1pm bouts of afternoon delight with Dr Ashley Bloomfield, but…silently, stealthily, Peters and his crack team of operatives have been manning Mission Control, hitting the phones and doing whatever it takes to bring our people home. And if, on reading Peters’ speech, you happen to feel that Peters is maybe blowing his own horn a little too loudly , we should keep in mind that Covid-19 regardless, this is an election year. In that respect, yesterday’s speech was a useful microcosm of the strengths and weaknesses that New Zealand First is taking into Election 2020. It wants to brag about its achievements as a key part of the government, while posing as the watchdog keeping the very same government in line.

Right now, NZF is fighting for survival. If it is going to reach the 5% MMP threshold it needs Peters back, front and centre. As the king-maker, as the wise old head keeping a promising young PM on track…and as a reliable safety net when well-meaning MoH officials try to lead the PM astray with some OTT nonsense over border closures. Give Peters points at least, for trying. It is really, really hard to project yourself as being an underdog within an administration in which you happen to be the deputy leader, but Peters gave it his best shot in yesterday’s speech :

One criticism is that we should have closed our border sooner, that we did too little too late. Another criticism was that the government’s response has been too myopic and captured by advice from the Ministry of Health. Both critiques could not be further from the truth.

Right. So why mention the untruthful critique at all…? Could it be because other voices on the centre-right (eg Simon Bridges) have been attacking the government for putting public health priorities to the fore – and presenting the National Party as the sole champion and best custodian of the interests of business ? However clumsily, Peters is signalling that he too, is no fan of public health zealotry at the expense of fellow Kiwis suffering from the impact of the virus. Evidently, Kiwi travellers stranded in Peru are not all that different from Kiwi firms stranded without cash flow.

Unfortunately, this is a warning shot about how the election campaign could easily end up being framed. Yes, the centre-right will patronisingly concede, the coalition government did a pretty good job of the womanly tasks of caring and sharing – but thanks lady, it now behooves the public to call in a man who understands the needs of business. A man tough enough to make the hard calls required to strike a ‘common sense’ balance between lives and livelihoods. And if more people die as a result, then hey…that only shows that the toughlove is working and firm resolve must now be shown etc etc.

As in the trenches of WW1, the Covid 19 crisis will provide the perfect opportunity for incompetence to depict itself as firm leadership under fire. (Bury the dead, but stay the course.) On past performance, Simon Bridges could be just the incompetent man for the job. Peters should be asked to put a sock in the self-regard, and become the coalition government’s attack dog.

In a separate effort at populist diplomacy, Peters has also joined Australian PM Scott Morrison’s call for an inquiry into the origins of the Covid-19 crisis, and its route of transmission. In the process, Peters has shrugged off any need for New Zealand to fear Chinese retaliation :

Peters said he was not worried about any similar repercussions for New Zealand because of personal assurances given to him. “The Chinese at the very highest level have promised me over the years…that they don’t behave that way, and I take them at their word.”

Hey. someone should tell Beijing that everything’s cool. Because that’s not the mood they’re in right now.

On April 27, Beijing’s ambassador in Canberra, Cheng Jingye, hit back on Canberra’s earlier call for a probe [into Covid-19] with threats of economic retaliation in an interview in the Australian Financial Review, hinting that it would target key Australian sectors like trade and education. “Maybe the ordinary people will say, ‘Why should we drink Australian wine? Eat Australian beef?” Cheng said. “The parents of the students would also think … whether this is the best place to send their kids.”

Again this is Peters using his foreign policy rostrum for electioneering purposes here at home. Why on earth is he putting this country in the firing line with Morrison and Donald Trump in calling for an inquiry widely seen – and not only in Beijing – as an empty, scapegoating exercise, and as an extension of the US trade and diplomacy war with China ? Does Peters really think that any inquiry launched and endorsed by the Trump administration, Australia and New Zealand is going to get to the bottom of whether the virus originated in the Wuhan wet markets, or in a Wuhan biowarfare lab?

Lining up with the US and Australia against Beijing is precisely what New Zealand diplomacy has been at pains not to do over the past three years. At MFAT, our diplomats must be tearing their hair out at how Peters has just cavalierly junked years of careful positioning, in order to score a few populist points on the 2020 campaign trail. Can the election prospects of NZF really be this desperate ?

The origins of the virus and its routes of transmission can and should be left to the academics. Our governments should await their findings, not try to lead them in order to score a few anti-Chinese points among the redneck vote here at home. Lets be clear about the risks we’re running. As previously explained in this column….in the wake of Covid-19, New Zealand is going to be even more dependent on China as the major, most reliable market for our beef, sheepmeat, dairy products and kiwifruit. China will also be, for the foreseeable, the main manufacturing and supply source of PPE gear and (eventually) of Covid anti-viral treatments and vaccines. Peters has just put all of that at risk.

By all means, criticise China for its actions in the South China Sea, for its forays into the Pacific or for its attempts to buy and foster influence here. But this “inquiry” call is utterly pointless. Why alienate China by joining forces with Trump and Morrison on this issue…We’re already seeing a round of trash talking and threats of trade retaliation. What benefits are there for New Zealand from making ourselves a junior player in this kind of exercise? Does Trade Minister David Parker think that this is a risk free path for us to be heading on down ?

Footnote : As New York governor Andrew Cuomo argued a few weeks ago, it is false logic to claim that a choice exists between saving lives and saving the economy.

Obviously….the economy only ends up worse off if we open up prematurely, trigger a second wave of infections, and then have to zigzag in and out of lockdown. But there’s a moral issue involved, too. As Cuomo added only a couple of days ago “New York State has avoided 100,000 infections because of the sheltering-at-home orders.” The “economy uber alles” approach may seem like feisty tough guy politics, but it also comes with a body count.

Earlier this week, columnist Suzanne Moore made the same point : sure, she says, there are business people willing to tell the media that the economic lockdown will destroy more lives than the virus. Funny that the GFC didn’t inspire the same business leaders into similar outpourings of altruistic concern for the vulnerable :

It is a pity they didn’t speak up after the last financial crash, which ushered in a programme in which the very poorest were punished for the sins of the bankers…..

The economy has shrunk. We already know that, Moore says. But, regardless….

We can grow it again, and more equitably, if the political will is there. It can be resurrected. The dead are locked down for ever. Stop this inane talk of saving lives versus saving the economy. It is a false binary. Health is wealth. If we don’t understand that now, we never will.

Today, hepsters, is International Jazz Day and so…here’s Art Pepper. With a lot of help from his wife Laurie, Pepper wrote Straight Life, which is still the best account of the jazz life ever published. Viewers of the sturdy TV detective series Bosch will know how much Harry Bosch idolises Pepper, and there’s a sweet interlude in season’s one’s episode ten where the detective explains to his daughter how Pepper wrote “ Patricia” for his own – estranged – daughter.

And as an aside, here’s a fine jazz track by Melanie Safka, who started out as a Jacques Brel type chanteuse before she became a pop star in the 1970s. Again, that’s Art Pepper providing the sweetener…