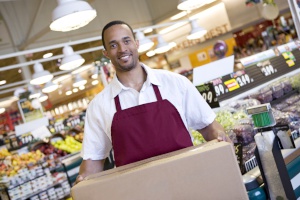 The economy may be falling like a rock but it hasn’t hit the bottom of the well yet, here or anywhere else. Time is so stretched – early March feels like a distant country – that planning rationally for what the economy might look like in two, three, six months or a year feels more like an exercise in science fantasy. Treasury projections have never been particularly reliable (too rosy by far, usually) but they’re what we’ve got right now.

In the foreseeable… will unemployment really be in double figures and/or up to one third of the entire work force? Yes, quite possibly. If so, how will individuals and firms pay their rent? Rent strikes (by tenants and firms alike) are going to become the next commonplace. Mortgage defaults are going to put pressure on banks, in a climate where even house sales will struggle to match the levels of mortgage commitments held by many who may soon be out of work. In fact, what will the old notions of rent, mortgages, wages, benefit support, loan interest, banking, and international trade look like by year’s end? No one knows.

For instance, the logic behind immigration policy has been turned on its head. Meaning : the unskilled temporary migrants working for peanuts in our supermarkets have proved to be far more valuable than software developers in meeting the country’s essential needs. Similarly, the folly of imposing ‘market disciplines’ on the public health system has been sharply exposed. Years of systematic health underfunding has now left us scrambling in the crowded global marketplace for the equipment and staff necessary to save lives.

Given the new realities, it would seem insane to try and recreate the economic system that existed, pre-Covid – although some cargo cultists in Parliament are urging us to do so. (After 30 years of ideologically-driven economic policy, it takes some gall to issue a press release headlined “Economic Recovery Must Not Be Ideological.”) Thankfully, the era of de-regulation (and penny pinching on social services to make fiscal room for tax cuts) has gone for good. With so many people out of work, only the state can adequately provide income support and – as in the 1930s – only the state can fund the sort of projects likely to employ large numbers of people, in the belief that their spending will keep the retail economy ticking over.

Once the worst of the crisis is over, taxes will have to rise, given the extent of social need across the entire community. If we’re truly serious about all pulling together, New Zealand is going to have to once again become more egalitarian. That direction would probably have wide support.

Obviously, much of the local manufacturing capacity gutted by globalisation will need to be rebuilt. With the global trading system in virtual shutdown, we will need to revisit – as Finance Minister Grant Robertson said yesterday – what we can build and provide for ourselves here, onshore. Likewise, a smaller tourism industry will depend on domestic tourism, once people slowly emerge from lockdown. With so many people reliant on state support for the foreseeable, the wage subsidy scheme will in effect, become the fore-runner of a Universal Basic Income scheme formerly mooted as a response to the job destruction likely from automation. Well, that era of mass unemployment has now arrived, ahead of schedule.

So much for speculation. Currently, 650,000 people are having their wages subsidised. Yesterday, the government rolled out a new $6.25 billion scheme of loans to business.

It will allow those with annual revenue between $250,000 and $80 million to apply to their banks for loans of up to $500,000, for up to three years. The government is guaranteeing 80 percent of the risk, while the banks are covering the remaining 20 percent.

To meet all the demands being placed upon it, the government has sharply increased its borrowing.

The Government will now borrow $25 billion in the 2019/2020 financial year, up from a forecast of $13 billion released just a fortnight ago. Treasury updated its borrowing forecasts on Wednesday morning, telling the market it would borrow an additional $12 billion before the financial year ends in June. It also warned that this could increase should the economic situation worsen.

Thankfully, New Zealand still has the headroom for even further borrowing – even though the recourse to borrowing and to quantitative easing that we’re seeing by governments around the world is likely to see a medium term rise in inflation, and in interest rates. But that’s a problem lurking further down track. (Thankfully, New Zealand entered the Covid-19 crisis with government debt at extremely low levels.) Given the steep rise in households dependent on benefits, that system has to be reconfigured. And not as in the past, to save money, but this time to deliver meaningful support, far more fairly.

Currently, the lifting of benefit levels by this reputedly centre-left government has been little more than token – $25 a week – which is far less than what Australia has been offering to those reliant on the state for income support. As Michael Fletcher pointed out a week ago in a brilliant article for Spinoff :

If arch-Conservative Australian prime minister Scott Morrison thinks it is necessary to double benefit rates – adding an extra $225pw to all rates – we are way behind the game with a $25 increase that represents something between a 6.4 and 10% increase. Even a 50% increase would not prevent an increase in poverty rates, but it would go a long way. It would also act as a fiscal stabiliser boosting household spending, which will be critical especially after the initial four-week closedown. Implementation time: one week. MSD has systems to adjust rates each year from 1 April. They only need to be told what the new rates are to be.

Even more easily, the current In Work Tax Credit could/ should be extended to all benefit recipients. As Fletcher also pointed out :

At the moment a family that has to go on benefit gets to keep their Family Tax Credit but loses the In-Work Tax Credit. Giving $72.50 a week less in Working for Families support to the poorest families because they are on benefit never made sense, but is completely crazy now. In the package last week Government dropped the minimum hours worked test for the In-Work Tax Credit but retained the ‘off-benefit’ rule. That should be removed too so that everyone eligible for Family Tax Credit gets the extra $72.50.

Beneficiary lobby groups have been making the same points about how New Zealand’s Covid-19 treatment of families on benefits is less generous than across the Tasman. Echoing the arguments advanced in the Fletcher article, Income Inequality Aotearoa New Zealand has called for the doubling of core benefits in line with Australia’s decision to do so, and for the individualising of benefit entitlements, rather than continuing to assess them on a couple basis.

It should be easy. Thanks to the decades of our ideologically-driven targeting of income support, the regulations that determine benefit levels (and the entitlement criteria for access) can actually be changed at the flick of a switch. Before the Covid-19 crisis hit, major differences in the economic pressures on households with different levels of income were already evident in this country. Covid-19 will accentuate them, and hit the poorest even harder. In that sense, we’re not in this together and never have been for decades.

People on benefits are spending more responsibly than most according to a new analysis of the Government’s Household Living Cost Price Index. The analysis shows people who receive benefits spend an average of 59% of their income on housing, electricity, and food. That compares to 36% of income spent on these three essentials by median income households, and only 26% by the wealthiest 20%.

As Slate eloquently put it recently, we’re all on the cruise ship now. Meaning : some of us may be getting cabin fever in lockdown, but a lot more of us are in steerage, or are providing essential services at personal risk to those of us still able to afford to live in cabins, under lockdown. Maybe the ideology that Labour really needs to transcend is its conservative tradition of treating people in work as the deserving poor – while it treats those on benefits as an undeserving lot who if anything, pose a threat to the conditions of those in paid work. Covid-19 is erasing those distinctions. It is time for the Labour -led government to act accordingly.