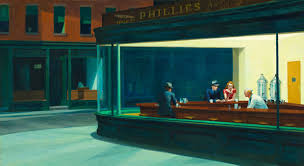 In the end, it was obvious that the lockdown had to be extended. According to epidemiologist Ayesha Verrall, our tracing systems are still struggling to reach the standard whereby several clusters could be handled at once, and in the context of only a small outbreak of Cobid-19. While that’s admirable – and it marks a significant improvement to where we were only a fortnight ago – this so called “ gold standard” still falls short of the capacity we’d need to trace the community transmission at the levels evident in other countries.

Moreover, there are still media reports of PPE gear not being readily accessible by frontline medical staff. So… it really was a no-brainer that we needed to give ourselves more time to (a) get our tracing systems up to speed and (b) improve the distribution and availability of PPE gear. It would have been foolhardy to do anything else. The delay also gives business more time to get its preparations in order.

One can almost feel sorry though, for National Party leader Simon Bridges. Desperately, Bridges has chosen to cast around for ways to depict our success in managing the disease as being a national calamity – even though New Zealand’s stringent measures to combat Covid-19 have produced significant results in health outcomes, with a low incidence of infections and only a .1 mortality rate per 100,000 of the population being recorded by the Oxford University global tracker.

Throughout the Covid-19 crisis though, National has encouraged the business community to blame the economic damage being done by the collapse of international trade (and the evaporation of consumer demand all over the world) as being somehow the prime fault of the decisions taken by the Ardern government. Yet who thinks that our Covid-19 problems could be fixed by just a few timely infusions of National Party know-how ? Can’t see any hands up out there. Most of us are thanking our lucky stars that Simon Bridges is not at the helm of this country’s response to the virus. We’re not alone in thinking that. The prestigious Atlantic magazine in the US has just run a story about PM Jacinda Ardern headlined “ New Zealand’s Prime Minister May Be The Most Effective Leader on the Planet.”

It is simply not credible to portray this extension – which asks business to remain in lockdown for merely an extra two business days – as a hammer blow to the business sector. GDP, wages, rents, cash flow…yes, they all face genuine problems because the virus is going to cause a 6% contraction ( at least) in the economy. Whining that government should have somehow done more to protect business from reality not only overlooks the serious supports that have been wheeled into place, well before similar subsidies were paid out in Australia. Typical, really. Even pre-Covid, employers had displayed a rare ability to talk themselves into a loss of confidence, while demanding certainty and security for themselves that they routinely deny to the people they employ.

Right now, there is an urgent need for the business sector to grow a backbone. It could begin by ceasing to blame the government for its woes. It also needs to stop looking across the Tasman for miracle cures. Because guess what? The IMF is predicting the Australian economy will contract by 6.7% this year – just like us. That’s largely because the Australians have been as dependent as we have on tourism and on international education. Even at Level Two, the hospitality industry will continue to suffer for as long as the fear of the virus persists, and while there is a perceived need for social distancing. Job insecurity and income anxiety are going to pare spending right back to the bare essentials, for the foreseeable. None of it will have been a by-product of when, precisely, the government chose to move into Level Three of the lockdown.

Even so…its worth noting that – .according to the government’s timetable – we will enter Level Three next Monday night, and stay there for at least two weeks, subject to a review at that point as to how we’re faring, before any movement to Level Two is deemed possible. That’s a tight timeframe, given the 3 to 11 day gestation period of the virus. We seem to be proceeding on the basis that as we (slightly) expand our bubbles at home and at work, any subsequent rise in infections will have occurred, and been detected. All inside of two weeks. We’re also assuming this pattern will have emerged with sufficient clarity for us to decide with confidence, about a subsequent relaxation nationwide.

All up, that’s doesn’t add up to an excessively cautious timetable. It looks more like we’re going to be riding our luck. If anything then. business should be thanking the government for striking a balance that obviously treats its concerns with as much gravity as can be possibly allowed by a corresponding concern for public health.

We’ve now got a few more days to kill at Level Four, which puts even more weight on what (re-purposed) art we turn to, during these conditions of isolation. The process is intensely personal, given there’s no chance of conducting a peer review of whether anyone else feels the same way, so…I’m going to generalise, wildly.

One thing the lockdown appears to have done is to change the dynamics of escapism. Underlying anxiety makes it more difficult to find satisfaction in the usual escapist fare – since we’re all living in a Scandi noir these days, there’s no need to seek it out. The aim is to find stuff that engages with current reality, rather than denies it. But this isn’t an absolute. I’ve been treating the new Dua Lipa dance album for instance, as the soundtrack to an imaginary party that may one day be possible again, beyond the lockdown.

As widely acknowledged though – a rare 10 on Pitchfork ! – the album that does engage almost perfectly with the current realities in both form and content, is Fiona Apple’s Fetch The Bolt Cutters album. She made it at home, complete with dog barks by her dog and other domestic noises while using her furniture and window shades as impromptu sound baffles. The album gets more and more interesting as it moves away from its early piano- based songs, into pure percussion and the many variations in how she uses her voice. In lockdown, it seems entirely appropriate that Apple should have named the album named after a line she heard Gillian Anderson utter on Anderson’s TV series, The Fall.

Basically, Fetch The Bolt Cutters deals in our current stack of personal and social anxieties and for once, that turns out to be a liberating experience. As usual, Apple manages to be emotionally intense, intellectually challenging and…pretty amusing as well. Kick me under the table, she sings on one track, but I won’t shut up.

Overall though, if we ever get out the other side…I’m betting that the memories we’ll retain of the lockdown will have to do with how it emptied the streets, turned up the volume on the birdsong, and made our downtown areas look and feel like ghost towns. In that respect, Edward Hopper has always been able to convey a strong sense of urban alienation – but in the wake of the lockdown what had previously looked like an allegory of social separation now looks just like how we’re living our lives these days. We ‘re all nighthawks at his all-but-empty diner.

Meaning: If you go into Hopper’s paintings on Google Images and put them alongside some of the photographs being taken of downtown life in 2020, they’re eerily alike. So here FYI, are some lesser known Hopper paintings plus a couple of photos taken in downtown Albany, a southern town in Georgia USA, in March 2020. To me, the atmospherics seem strikingly similar. 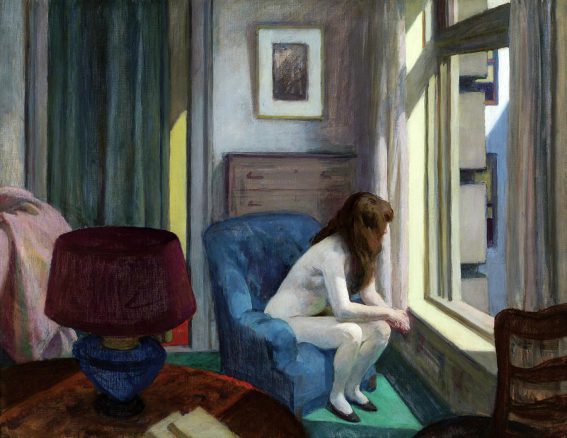 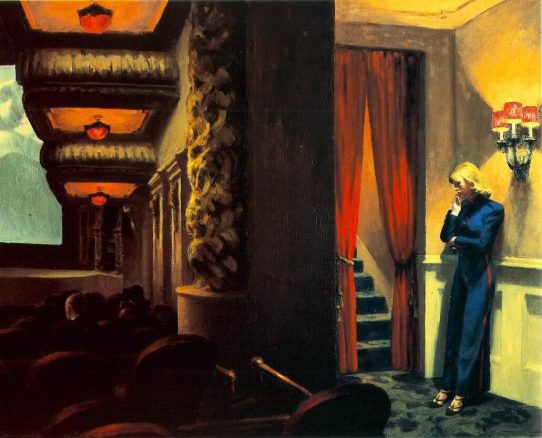 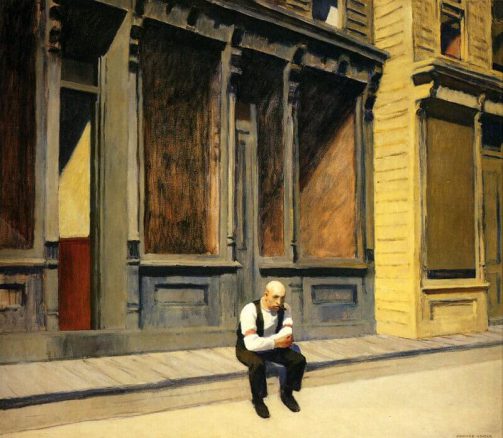 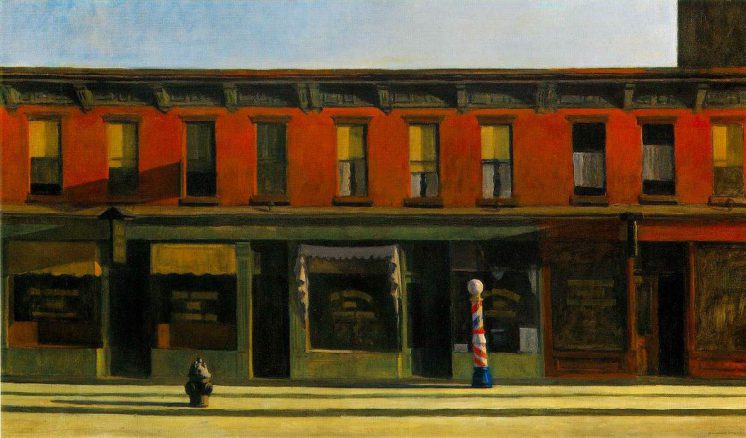 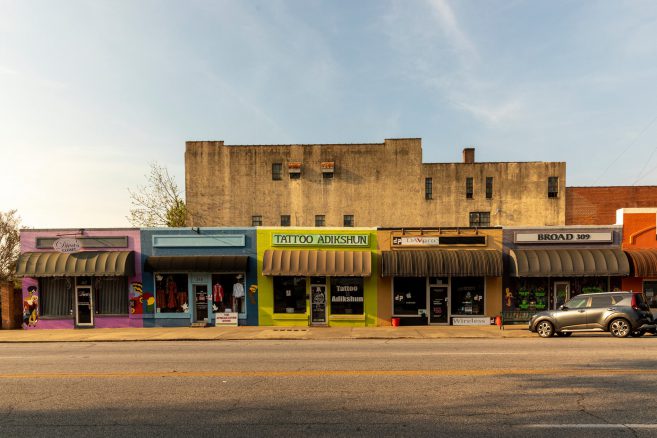