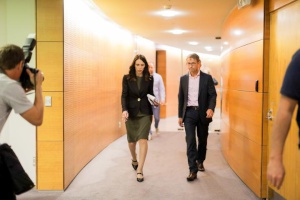 L
eadership is an intangible quality, but most New Zealanders will be thanking their lucky stars for what’s being provided by PM Jacinda Ardern and Ministry of Health Director-General Ashley Bloomfield. On a daily basis, both have been clear and decisive about the rationale for the policies they’re pursuing and – by and large – they’re managing to re-assure the public, and yet prepare them gradually for the bad times and challenges to come.

Unfortunately…Ardern, Bloomfield and the rest of us are having to deal with the fallout from decades of systematic neglect of the public health system. In the past, deliberate underfunding built up a vast amount of unmet need among patients. Evidently, it also undermined our ability to cope with a pandemic that – for years – epidemiologists have been predicting as inevitable. As mentioned before in this column, we were ranked late last year at 77th out of 195 countries in terms of the “Infection control practices and availability of equipment” in the event of a pandemic. There’s a very good and recent stock-take in the NZ Herald about – among other things – our very limited stock of ventilators. Neo-liberalism is once again, going to end up costing lives.

As a result of the shortfalls, New Zealand is now headed on a crash course to deliver the resources – notably more ICU beds and staff, more ventilators and more PPE protective masks, gowns and gloves – that were sacrificed as ‘ not need to have’ items during the years when imposing austerity on the health sector seemed like such a good idea, if it could make fiscal room for another round of tax cuts.

Former Air New Zealand boss Rob Fyfe is now in charge of co-ordinating the crash production of the resources that will be needed to treat seriously ill Covid-19 patients, and to protect the health workers who will be caring for them. In his RNZ performance this morning, Fyfe wasn’t exactly a model of clarity. Sure, he conveyed lots of pep talk excitement about industry’s good intentions and offers of help, but was almost devoid of content on whether anyone had yet started production, on what scale, and what an ETA for the essential PPE gear and ventilators) might look like. Apparently, Fisher Paykel Healthcare have expertise in building what goes into ventilators, and some of that – surely – would be relevant to building the ventilators themselves. Lets hope.

In sum, we have a fast closing window to get ready for the storm to come, but the signs are not good that we’re responding quickly enough, or very efficiently. Reportedly, the production lines for PPE gear are in disarray. Lockdowns do work though. Even if they do take time to show their benefits.

The US is fast becoming the global epicentre of the viral outbreaks, and of the impact on jobs and economy. In recent days, a fake trade-off has been created between public health and the health of the economy. New York governor Andrew Cuomo has responded that there isn’t, or shouldn’t be a trade-off. Saving lives has to win, every time. As he says, we don’t put a price tag on the lives of our own loved ones, and we shouldn’t do so with the lives of anyone else. The economy can wait.

Meanwhile, there continues to be a vacuum of leadership at the White House. US President Donald Trump is once again proving himself more of a predator than a protector when anyone else looks vulnerable. For what seem purely ideological reasons, Trump has delayed invoking the Defense Production Act and has declined to release much at all from the emergency federal stockpiles. He’s made it clear that he’s more in favour of requiring states to bid for them, and to bid also for the resources they require from industry – rather than to have the White House order their production as a need that’s in the public interest. He’s all for kick-starting the US economy back into gear, come April 12th.

Supposedly, the House’s initial $2 trillion Covid-19 bundle of response measures explicitly bars Trump, his businesses, his family or his administration figures from profiting from any part of the package. We shall see. It seems that real estate investors have been given special opportunities :

Senate Republicans inserted an easy-to-overlook provision on page 203 of the 880-page bill that would permit wealthy investors to use losses generated by real estate to minimize their taxes on profits from things like investments in the stock market. The estimated cost of the change over 10 years is $170 billion.

Moreover, within the $350 billion bundle of loans, wage subsidies and benefits for small business there is an interesting exemption under section 15 that allows people who own hotels, hotel chains or restaurant chains – and them alone – to qualify as small businesses, and thus get access to what the support package is offering. How odd that at this time of crisis, the federal government should see its way clear to prioritise the special needs of people who own and operate hotels and hotel chains.

….Ccrtain hotel owners, even those employing thousands of people, will be eligible for small-business loans, a provision that could potentially benefit Mr. Trump’s company to help to continue to pay wages for his employees. The Trump Organization could also benefit from the $15 billion change to the tax code won by restaurants and retailers.

Oh, and the Republicans are also using the pandemic to push their agendas against abortion, and against the rights of trans people. Fortunately, leadership is being shown at state, county and community level. Notably by governor Cuomo in New York and by California governor Gavin Newsom. The Cuomo clip below is worth watching by New Zealanders for the info on ventilator adaptation ( “splitting”) and the far higher number of days on ventilators required by Covid -19 patients. As Cuomo indicates, the average turnaround time on ventilators in Covid-19 treatments is between three and five times as long as normal. Yikes.