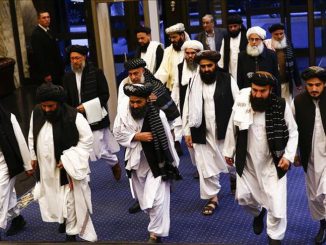 The deal that has just been has struck to end the involvement of the US and its NATO allies in Afghanistan bears the usual hallmarks of deals done by Donald Trump. In this ‘landmark’ Afghan ‘peace’ deal, weakness has been defined as strength, incompetence as brilliance, and US allies have been betrayed on terms devised solely to serve the narcissistic interests of the Great Deal-Maker himself. On the campaign trail, Trump will be able to brag that he brought America’s longest war to an end. Too bad if our Afghan friends will be ending up as collateral damage in that great cause.

Unfortunately, one needs only to look at the terms of this so-called deal to see the one-sided nature of the capitulation. The US and its NATO allies have pledged to begin withdrawing some 4,000 troops immediately, and to leave Afghanistan entirely within 14 months. In fact, the US made the commitment to start the withdrawal of its current 13,000 to 14,000 troop presence – thereby giving away its main negotiating card – right in the middle of these talks with the Taliban, before any reciprocal concession had been asked for, let alone delivered.

Incredibly, the elected Afghan government in Kabul were excluded entirely from the negotiations that have decided their fate. This should send a blaring warning to any of American allies in other global trouble spots : eventually, you will be sold out, without having even an input to the end game that Washington decides upon. Already the Kabul government is complaining that it didn’t agree to release the Taliban prisoners it currently holds, but which the US unilaterally agreed to release during the negotiations.

Under the terms of the deal, the country’s name will revert to the Islamic Emirate of Afghanistan, which it had under Taliban rule. The Taliban has always said that it rejects the current constitution of Afghanistan, and the protections that have been extended to women and minorities. Currently there is no consensus on whether a new Taliban-dominated Emirate would be the same as the harshly repressive old one, or would be an Islamic republic with some concessions made to democracy. As Vox news reported last year when the talks entered their final phase, there is a widespread perception among Afghans that the US has been engaged in simply handing the country over to the Taliban.

After all…what has the Taliban been asked to offer in return ? It has merely had to promise on a temporary ceasefire, and not to allow Afghan territory to be used inn future as a haven for entities such as al Qaeda to launch terrorist attacks against the US. No mention at all of a commitment to protect the rights of Afghan women and children and ethnic minorities that have been won at the cost of so much blood and money and development aid during the past 19 years. Such issues will now be decided in separate talks between the Taliban and the soon-to-be-abandoned government in Kabul. Bravely, some Afghan women have chosen to speak out against the imminent return to power of the Taliban, and they may eventually pay the price for doing so :

A growing hashtag movement on Afghan Twitter, #MyRedLine, has gone viral as thousands of Afghan women declared their dedication to pursuing education and employment even if the Taliban return to power. In Kabul, an Afghan university student privately voiced a concern that if the Taliban return, they may use the hashtag as a kill list for reprisals.

Sure, no one wants the war in Afghanistan to continue indefinitely. But lets not kid ourselves. In reality, this deal is solely about the terms of the US surrender. It looks nothing like a ‘peace’ deal for all Afghans. In the meantime, the Taliban can afford to ‘ recognise’ the Kabul government, because once the Americans and their NATO allies have gone, the Taliban will speedily dispose of it. To repeat : the deal imposes no conditions whatsoever on the Taliban’s subsequent treatment of the Afghan people, only on how they should promise to behave towards the United States now and in future. As NBC reported last December, the timing of cutting Afghanistan loose is all about Trump’s personal political needs :

Trump had made clear to his advisers earlier this year that he wanted to withdraw all troops from Afghanistan by the November 2020 election. “It’s all about talking points in 2020,” the former official said.

For its part, New Zealand doesn’t seem to be too fussed about the betrayal of our Afghan allies. New Zealand spent hundreds of millions in the defence and development of Afghanistan and ten of our defence personnel died in that effort. However, Foreign Minister Winston Peters has hailed the peace deal as a “major step forward.” Which it certainly is – but mainly for the Taliban, and for us. Now we too, can abandon Afghanistan without getting in trouble with Washington for doing so prematurely, as we all head towards the exit. As the Atlantic magazine has put it :

The Taliban is stronger; the president has conveyed his impatience to end American involvement and his willingness to abandon the elected Ghani government. America’s allies are weaker, seeing just how blithely the leader of the free world will compromise their interests….And the government of Ashraf Ghani has a noose around its neck.

Yep, chalk up another landmark in the battle against Islamic extremism.

Footnote : Donald Trump has been walking in much the same footsteps as Mikhail Gorbachev :

In 1985, the Soviet leader Mikhail Gorbachev had decided to end the occupation of Afghanistan before starting negotiations. Later, when the Afghan government announced dialogue, however, the [mujahideen]completely rejected the proposal and promised to continue jihad until the entire withdrawal of Soviet troops. At last, the Soviet troops withdrew under the Geneva Accords in 1988 but left no reason for Mujahideen to make peace. The insurgents perceived that they had crushed a superpower, and the Kabul government was nothing before them. Finally, the Afghan government collapsed in 1992, and the civil war started.

Before Trump, other US leaders have followed the same pattern of signalling their intention to leave Afghanistan, virtually without pre-conditions – a stance that has motivated the Taliban to pile the military pressure on America to give up, and go home :

Similarly, in May 2003, Donald Rumsfeld, the US defense secretary, had claimed that most of Afghanistan was secure; announced an end to “major combat activity” and set a timeline for troop withdrawal within twelve months. After that, the Taliban instantly returned and began attacks on US bases and government buildings, and realized that the US had lost its energy in combat. Likewise, Barack Obama also continuously proposed dates for withdrawal that diminished the dread of failure of the Taliban and encouraged them to continue fighting.

Finally, that’s the actual parallel with the Vietnam War. In both cases, withdrawal has become a rout. As in Vietnam, the military engagement in Afghanistan was doomed from the outset. Yet the least we can do now is to end the hypocrisy. Lets not hail this conclusion – which looks like handing the entire country back to the mercies of the Taliban – as delivering peace in our time.