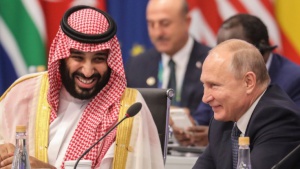 Safe to say, Vladimir Putin did not expect the response he has received amidships from the Crown Prince of Saudi Arabia. Earlier, Russia chose to walk away from the OPEC talks in Vienna that were aimed at reaching an agreement on how to reduce world oil production (and protect oil prices) in the light of the fall in demand being caused by the coronavirus. No doubt, Russia and its allies in the US shale industry probably glimpsed an opportunity to undercut OPEC and seize some of its customers.

by hugely ramping up production, signing up customers and drastically cutting the oil price in a fashion designed to knock Russia and other oil suppliers right out of contention. It isn’t a situation that’s likely to last. Yet for now, the Saudis appear intent on forcing Russia back to the bargaining table by schooling the Kremlin on just what bad things might happen to their nice little oil exporting business, if and when the Saudis decide to get really mean. In preparation for this price war, Crown Prince Mohammed bin Salman (MBS) had conducted a purge earlier this week of his princely opponents back at home.

So there’s no doubt who rules Saudi Arabia. But who rules the world? US President Donald Trump is watching this fight between his two besties – Putin and MBS – and has been seeing the US stockmarket go reeling from the fallout. Wall Street matters to Trump. (Main Street, not so much.) So far, Trump has viewed the coronavirus crisis in the US almost entirely through the lens of its likely impact on the stockmarket, and thus on his own chances of re-election. As the Washington Post recently pointed out, when the US stockmarket goes up it is because of the godlike genius of the narcissist in the White House – but when it goes down, it is because of the human failings of other people.

So someone else will be held to blame now that the US stockmarket lost 7% in a single session, its biggest drop since the GFC in 2008. (On Twitter, Trump has been saying that Saudi Arabia and Russia are “arguing” over the price and flow of oil, and that Fake News has also been causing the market to drop.) Meanwhile on Planet Earth, global markets are being roiled by the twin impact of (a) the economic damage and the uncertainty being caused by the coronavirus and now (b) from this Saudi Arabia vs Russia production/price war that has seen the sharpest one day fall in crude oil prices since the Gulf War in 1991. Currently, the oil industry is being hit by a double whammy – a virus-driven decline in demand, and the oversupply created by this production/price war.

No doubt, Trump will be on the phone to MBS, who will be re-assuring him that this oil production/price war thing is only temporary, and Trump will then tell the world that he, and he alone, has brought about peace in our time. That announcement will be premature. Even if some semblance of stability returns to oil production and pricing over the next few weeks, the damage being done to the global economy by the coronavirus epidemic will continue. Global business is in sharp decline. Jobs are being lost, and governments around the world are scrambling to find ways to sustain a semblance of business normality – even though as yet, there is no end game in sight for the virus.

Lets step back in time now, to simpler days and to simple-minded solutions. So…. if National gets elected, landlords will once again be able to evict tenants at will, raise rents anytime they like, and ignore the need to install a healthy standard of heating in the homes they put out to rent. This promised ‘bonfire of regulations’ is being done in the name of cutting red tape. Yet in the very next breath, National will actually increase the red tape and regulation faced by tenants, who will – under its plans – be forbidden to do sensible, common sense things like installing a fire alarm, putting a bracket on a wall or screwing in a door bell without first getting the permission of the landlord.

You get the drift. De-regulation under National is a one way street. National is more than happy to crack down on beneficiaries say, and increase the red tape and targeting that gets in the way of their access to entitlements. From now on it seems that National wants ‘common sense’ to determine our health and safety regulations. Now, that would be ’ common sense’ as defined by employers. Under National, we seem headed back to the same common sense approach that used to prevail in the logging industry and at Pike River, before the socialists took over. That was the problem with the late Helen Kelly. She just didn’t take a ‘common sense’ approach to health and safety in the workplace.

Oh, and in addition…National will also reduce bureaucracy and red tape by creating a new bureaucracy at the cost of millions of taxpayer dollars – starting with a Minister of Regulatory Reduction on a salary of circa $300,000 a year, and with an expensive supporting secretariat of officials, advisers, and spin merchants. Do we need such a wasteful diversion when the country is grappling with real problems, like the coronavirus ? Of course not.

Supposedly, business innovation and entrepreneurial zeal is being choked off by excessive regulation …That’s despite the fact that New Zealand has just topped a global index as the easiest country in the world in which to do business. How did we win that No1 ranking ? By operating the world’s most extensive lack of regulation when it comes to 12 significant factors :

10.Contracting with the government

Hard to believe I know, but Bridges is promising to send millions of taxpayer dollars on creating a new bureaucracy and compliance regime to solve a totally non-existent problem when – arguably – the regulatory balance is already heavily tilted in favour of National’s friends in the business sector.

Plainly, if Kiwi firms can’t manage to succeed in the current business climate, they wouldn’t survive anywhere else, either. Somehow, the net of regulations that exist in foreign countries – for good reasons of consumer and worker protection – don’t seem to stop foreign firms from competing successfully with our firms in global markets. You have to wonder why that is. What is wrong with our exporters ?

Footnote : Probably, you’d have to go back 40 years (to the early 1980s) to find a time when central government last played the dominant role in determining the economic outcomes for this country. Like everywhere else, New Zealand then went through a neo-liberal experiment in the 1980s that sharply reduced the role of government, while failing to deliver the glowing outcomes promised by the free market zealots. Eventually, the Western world’s romance with neo-liberalism ended with the Global Financial Crisis of 2008, a disaster directly attributable to the cutting of red tape in the banking sector.

Everywhere else, the mania for de-regulation has significantly abated. Only in New Zealand and among the fossils on the centre right – National and Act – can you find political parties still seriously preaching the 40 year old gospel of tax cuts, de-regulation and small government. A few weeks ago on Newsroom, Bernard Hickey totally demolished National’s messaging on tax cuts.

IMO, it would be healthy for our political system if the centre-right could offer some practical ideas about economic policy that actually belong to this generation, this century and this millennium. Obviously though, that task is entirely beyond them. The parties within the coalition government continue to be the only political players who are actually trying to grapple – imperfectly – with the social and economic realities facing this country. Business may be lining up for more handouts from National, but no one else in the world believes in the remedies it is peddling.

Talking about gaslighting – which is the process of lying to people such that they begin to doubt their own sanity – the term also happens to be the title of the first single and album in 15 years by the Dixie Chicks. During the mid 2000s, the group lost most of their country music audience by daring to criticise the US invasion of Iraq….Now they’re back, and in the hands of star producer Jack Antonoff. (Antonoff also produced the most recent albums by Lana Del Rey, Taylor Swift, St Vincent and Lorde.)

Here’s “Gaslighter” the single. Supposedly the target of Natalie Maines lyrics is her lying and cheating ex-husband Adrian Pasdar, but clearly….a refrain based around “lie, lie, lie” also has some wider topicality in the United States right now.