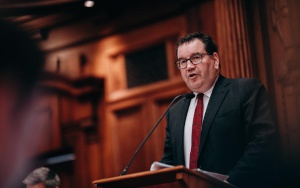 Obviously, yesterday’s massive $12.1 billion economic stimulus package (4% of GDP !) will not totally insulate people from the economic hardship caused by the coronavirus, but it will soften the impact. More will be needed, before the May Budget. One might have hoped that in this time of national crisis, there would be something like a bi-partisan approach to the response, but no. Labour has used the virus as political cover to bring forward its Budget intention to permanently raise benefit levels, although not by the amounts advocated by the Welfare Expert Advisory Group. For his part, National leader Simon Bridges has reverted to his party’s time-honoured beneficiary-bashing tradition by ranting about how the stimulus package was putting beneficiaries ahead of workers.

Bluntly, what we see in this package today is money flowing faster into the hands of beneficiaries than the workers and the businesses that will lose their businesses and their jobs over the coming weeks and months.”

Really? How can that be when the $5.1 billion being directly allocated ASAP to businesses and to workers in wage subsidies, is more than double the relief that’s being allocated to beneficiaries? Moreover, those on welfare are getting $25 a week while the stimulus package is also giving businesses $2.8 billion of relief in tax changes to help improve their cash flow? The beneficiary numbers, Bridges seems unable to grasp, are shortly going to be swelled significantly by the people who are about to lose their jobs – regardless of what this or any other government tries to do about the coronavirus. Clearly, if Bridges was the PM, the neediest would be being left behind.

Thankfully, we have a somewhat centre-left government at this time of crisis. As Paul Krugman pointed out yesterday in the New York Times, Republicans are really hopeless at coping with an economic crisis. So far, at federal, state and community level, the effective plans to cope with the coronavirus crisis in the US have been coming from the centre-left end of the political spectrum. A few days ago, it took a federal judge to stop the Republicans from kicking 700,000 poor people off access to emergency food.

As I’ve pointed out before, there are many competent centre-right economists, but the G.O.P. — not just Trump, but the whole party — doesn’t want their advice. It prefers hacks and propagandists, the people that [right wing economist Greg] Mankiw famously called “charlatans and cranks,” whose only idea is tax cuts.

Same story in this country. Despite the myth about centre-left governments being slaves to their ‘tax and spend’ impulses, it has actually been the fiscal conservatism of the Cullen/Clark and Robertson/Ardern administrations that has left this country well prepared to weather an economic crisis. Fortunately, the centre-right lost the 2005 election – otherwise, National would have frittered away the fruits of the boom years on tax cuts instead of using them, as Michael Cullen did, to pay down government debt – which has subsequently given successive New Zealand governments lots of room to move, both during and after the Global Financial Crisis. Even now, some of the costs of coronavirus support will be met by borrowing – which largely thanks to Cullen (and to low interest rates) we can amply afford.

Similarly, we can only thank the Good Lord that Winston Peters didn’t go with Bill English in 2017 – because again, the cupboard would have been emptied by the National Party in another round of tax cuts to disproportionately favour the better-off, just before the coronavirus crisis appeared on the horizon. As Finance Minister Grant Robertson said yesterday, he had been saving surpluses for a rainy day, and now that rainy day has arrived. (For many low- income people of course, it has been raining the entire time.)

Inside the Stimulus Package

Despite Bridges’ claim that the stimulus package is “confused” almost all of the appropriate bases have been systematically covered. There is (a) that $5.1 billion in wage subsidies being provided to firms to sustain existing workers in jobs and (b) the $2.1 billion in income boosts to beneficiaries that will help those who have already lost their jobs, and those who are about to do so.

There will also be a significant one-off boost to the Winter Energy payments to mitigate the big power bills that high risk elderly people will incur by spending more time at home. This is good, forward thinking policy. The healthier these pensioners can be kept during the looming winter influenza season, the more capacity the health system will have to deal with coronavirus patients. On that point, there will also be (c) a $500 million dedicated funding boost to the health system to boost its capacity to treat coronavirus patients and finally (d) there is the $2.8 billion of tax relief being offered in a variety of ways, to business. For now, current sick leave entitlements will not otherwise be extended.

Essentially, the wage subsidy scheme is a small business assistance package, given that the subsidy will be capped at only $150,000 per firm. (Bigger firms will be assisted in a separate package, once consultation on the details with the banks has been finalised.) Contractors, the self-employed and sole traders will all be eligible for the wage subsidy, as will the well people who will be looking after coronavirus victims. Overall, the aim is to maintain as many workers in jobs as possible, since it will be their spending power that will keep the wider economy ticking over. The boost to benefit levels will also help the retail economy in the same way. Presumably the decision to continue with the stepped increases in the minimum wage is also connected with this same need to sustain spending within the domestic economy.

To those ends, there will be a maximum $585 a week wage subsidy available to full-time workers in eligible firms, and a maximum $350 a week subsidy for part-timers. To be eligible, firms will need to have recorded a 30% decline during any one month during the first half of this year compared to the same period last year.

From April 1st, there will also be that (fairly miserly) $25 a week permanent boost to the welfare payments available to beneficiaries. (Hopefully, this is not going to be the main response to the Welfare Export Advisory Group report.) Even so, question marks remain over the adequacy of the testing regime at one end of the coronavirus threat, and – at the other end of the spectrum – the numbers of ventilators the country has on hand to save the lives of the seriously ill.

Given that the United States can rustle up only 160,000 ventilators maximum across its entire population, there is cause for concern. Currently, New Zealand has only 220 Intensive Care Unit beds with ventilators but – reportedly- there are plans afoot to re-purpose operating theatres as ICUs, and to adapt anaesthetic equipment as ventilators. According to the US Center for Health Security at Johns Hopkins University, Australia and New Zealand are among the worst off regions for the number of ventilators per capita :

US: 20.5 ICU beds with mechanical ventilation capability per 100,000 population

Basically, we don’t have the capacity to test our population adequately. Even now, those 12 confirmed cases may be unduly optimistic, given our very low rates of testing to date per capita. Similarly, we don’t have the capacity to save their lives with enough ventilators if and when they get really sick. Since PM Jacinda Ardern has this week cited Taiwan as a model, here’s what the Taiwan test ( and re-testing) response to the virus threat on its doorstep has included.

Finally….offhand, this crisis is a pretty tragic reflection on national priorities. Think of the trillions that get devoted globally to military expenditure in order to meet imaginary or self-generated threats – when the equipment that’s needed to save lives in a pandemic is now being shown to be abysmally inadequate. Here, we spent well over a hundred million dollars annually on security services that failed to protect the community in Christchurch. Now, it seems that we are spending billions on defence when the resources needed to (a) test and (b) to treat the threats to life from a long-predicted global pandemic have been grossly neglected. When Simon Bridges talks about misguided priorities, this is really what he should be talking about.

Footnote One : Belatedly, Donald Trump has realised that it is not the state of the stockmarket that will get him re-elected, but the health of the people who vote. In an abrupt about-face, Trump and the GOP have come up with an $850 billion spending package. Basically it is a tweaked and expanded version of the same plan devised by the House Democrats led by Nancy Pelosi, and derided only 5 days ago by Trump as consisting of “ goodies” that he would not support.

Oh, and if you’re wondering why say, US airlines should suddenly need a government bailout after ten years of huge profits….that’s because they reportedly spent 96% of those profits on stock buybacks to enrich their investors and their CEOs, whose payments typically include stock holdings. Now, they say the threat from the virus is leaving them broke. If ordinary citizens ran their finances like the US airlines and the big hotel chains, they’d be being derided as welfare queens.

Footnote Two. The politicking claims by Bridges that the government has been slow to respond are not supported by the facts. On Friday 31 January the World Health Organisation declared the coronavirus to have “ emergency” status, and the NZ government announced a travel ban on China on Sunday, February 2. On March 11, the WHO declared a pandemic, and this $12.1 billion package has been announced only a week later.

Talking of speed and comprehensiveness, the self-quarantining requirement imposed by the Ardern government on all incoming travellers preceded the similar move now taken by Australia. Also, the $12.1 billion initial stimulus package announced in New Zealand (population (4.8 million) compares more than favourably per capita with the $17.1 billion initial stimulus package offered by the centre-right government in Australia, a far richer country with a population of 24.6 million. And if you’re worried about us allocating 4% of this country’s GDP to our coronavirus response, Spain has just announced a $200 billion stimulus package that’s equivalent to 20% of their GDP.

Footnote Three. All of which proves Jeremy Rose’s point that that when sufficiently motivated, the world does have the ability to shift its resources and change its lifestyles in order to counter an imminent threat. Now, about that threat posed by climate change…