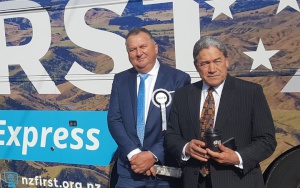 New Zealand First has needed a diversion after weeks of bad coverage over its dodgy handling of donations, but it really, really doesn’t need what Shane Jones has chosen to provide. According to Jones, New Zealand has too many people from New Delhi, Indian students are “ruining” our education system, and anyone who thinks otherwise is just some young whippersnapper from “Ngati Woke”..Spare me. All of this trolling underlines the deadweight that Jones is for New Zealand First, for his parliamentary colleagues, and for the country as a whole. Somehow this guy has fallen upwards to to where he is now a Cabinet Minister, and nothing he says seems capable of disqualifying him from that most lucrative post.

Feeling disturbed by allegations of corruption in NZF? Well, along came Jones to remind swing voters that this is only the half of it. Apparently, NZF are also racists and proud of it, man. As we approach the anniversary of the most violent outburst of bigotry in New Zealand history, only the Lord knows why Jones has chosen to double down on a ministerial message of racism and intolerance, targeting one of our oldest migrant populations.

Besides everything else…who is the political audience for what Jones is saying about Indians? Jones evidently thinks it makes sense to outflank National by pandering to the racist rednecks on the extreme right, but that does nothing for NZF’s more urgent need to win votes as a reputable party of the political centre. Right now, NZF desperately needs to climb back from its current 3% polling levels to above the 5% threshold necessary for political survival. Yet for every voter that Winston Peters tries to re-assure, Jones can be relied on to repel them, and more. When your party has a corruption cloud hanging over its head, why would any sane politician embark on a mission to deliberately refresh the public’s memory of New Zealand First’s history of anti-Indian and anti-Chinese sentiment? Surely, NZF’s 3% bedrock of support already contains almost all of the anti-immigrant, youth-hating pensioners in the entire country.

Ah, but at the end of the day, its only Shane Jones being Shane, right? Such a character. The myth that Jones is a loveable larrikin instinctively in tune with heartland sentiment has always been a media fiction, unsupported by any evidence at the ballot box that voters actually like him, or feel inclined to support him. Jones has never won an electorate contest in his life, with his parliamentary career being entirely dependent on his party list positions. Starting in the mid-2000s, Jones steadily lost elections under the Labour banner. And when time finally ran out for Jones with Labour, partly because National had reportedly helped to fund his bid for the leadership of the Labour Party, he went to work openly for National’s Foreign Minister Murray McCully in an MFAT sinecure. (If not for Winston Peters, a vote for NZF would be a vote for National, if Jones had anything to do with it.)

Since his return to parliamentary politics, Jones has continued to lose electorate contests on the New Zealand First ticket. Along the way, Jones’ keen rapport with deep-pocketed donors in the fishing industry has been a matter of comment for years. Rather than being a diversion from the NZF headlines about its relationships with big corporate donors, Jones has been something of a poster child for them.

Finally…given his apparent willingness to go to bat for his corporate donors, Jones was always an odd choice to be put in charge of the Provincial Growth Fund which – from the outset- has risked being perceived as a political slush fund. In the run-up to Election 2020, National will be concentrating a lot of its fire against NZF on Jones, and on the quality and nature of his PGF project funding. Jones’ default mode – to bluster that he’s got this, and that its all under control – only tends to make him look guilty, even on the rare occasions when he isn’t.

Forecasting Super Tuesday
The almost simultaneous departure of Democratic moderates Pete Buttigieg and Amy Klobuchar has a nice symmetry to it. In recent weeks, their obvious dislike of each other seemed to be their sole remaining reason to exist. On Super Tuesday, the Buttigieg campaign was on course for (a) running out of money and (b) falling below the 15% threshold required to win delegates in most of the 14 states holding their primaries. Bailing now not only saved Buttigieg from the embarrassment, but it could win him brownie points in any future Biden administration, and in any future bid for the presidency. Since he’s only 38, you can bet he will be back.

The size of the current Biden surge remains an unknown, as is whether his victories tomorrow will be confined to the smaller southern states. The polls in the big delegate-rich states like California and Texas still have Sanders comfortably ahead, and Biden’s realistic aim would be not to win, but to avoid being routed by Sanders in those contests. Anything less than a ten point loss in Texas and California could still enable Biden to claim it is he who has the momentum that is so beloved of the media punditocracy. Young voters though, still seem to dislike Biden intensely.

Later this week, this column will be worth looking more closely at the claims by the Sanders campaign that Sanders will be able to sweep Trump from office by motivating and mobilising a huge wave of liberal non-voters. This fervently held belief seems to be wishful thinking. More on that after the results are in tomorrow.

Message to The Man
And from out of the distant past, here’s Run-DMC with a timely message from his New Zealand First colleagues, for the party’s chief resident racist :

You’re the instigator, the orator of the town
You’re the worst when you converse, just a big mouth clown
You talk when you’re awake, I heard you talk when you sleep
Has anyone ever told you, that talk is cheap…?
I’m tired of listening to the garbage you talk
Why don’t you find a short pier, and take a long walk
You talk too much
Then you never shut up
He said you talk too much
Homeboy you never SHUT UP!!!
Shut up!!!
Shut up!!!