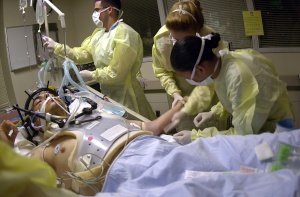 With a few honourable exceptions there has been a striking lack of focus on the (insufficient) number of ventilators in our intensive care units – and an almost complete absence of overt urgency about acquiring and/or building more of them. Ventilators are literally the difference between life and death for seriously ill Covid-19 patients. Arguably, this shortfall is more vital than having enough PPE gowns, masks and gloves, important as those are.

Every other developed country (see links below) has been in panic mode for the past fortnight or more about finding ways to increase their supply of ventilators. Yet ten days ago, the MoH was still having great difficulty counting how many ventilators we have, let alone how many we need, let alone how we might go about acquiring more of them. All last week though, the daily briefings by Health Ministry officials and the PM’s press conferences were entirely devoid of information ( or media questions) about them.

Sure, former Air NZ chairman Rob Fyfe has been asked – presumably by the PM’s office- to try and co-ordinate an industry response to the general range of equipment needs raised by Covid 19. Unfortunately, the interview Fyfe did with Morning Report was little more a TED talk about how pumped everyone in industry was feeling about wanting to help out, once he got his head around the issues involved.

Frankly, that’s terrifying. Covid-19 is a respiratory disease. It attacks the lungs. When seriously infected people end up in ICUs, a significant number of them will need ventilators to take over or assist the role that the lungs normally perform. Otherwise, a high proportion of those infected people will die. The rough rule of thumb with Covid-19 infections is that 80% of those infected will have unpleasant but relatively mild bouts, 15% will require hospitalisation for two weeks, and 5% will need ICU treatment. Of those in ICUs, we know from Italy that 12% will need ventilators.

It is easy to see why our capacity could be overwhelmed. As Werewolf reported earlier, New Zealand and Australia are among the lowest ventilator per capita regions in the developed world. Reportedly, the latest MoH stock-take reveals that New Zealand has 520 ventilators nationwide, spread unevenly across its 19 DHBs. This figure includes the anaesthetic machines that have been re-purposed as ventilators. Those ventilators will be attached to an equally inadequate number of ICU beds :

A Ministry of Health (MOE) audit showed there were currently 153 intensive care beds in public hospitals and that could be expanded to just over 560 by co-opting space from other units. Dr Andrew Stapleton from the AUS/NZ Intensive Care Society Covid-19 group told Checkpoint’s Lisa Owen: “What we have to bear in mind is the current beds available in New Zealand ICUs aren’t empty and waiting for patients to get Covid-19, they are 80-90 percent full at all times so the amount of spare, available beds is low. …Dr Stapleton said if more than 3000 or 4000 patients in New Zealand within the same time period required ICU treatment, current capacity would be overwhelmed.

Current policy seems to be based on the hope and gamble that the lockdown will be SO successful, we won’t get into crisis mode. This seems wishful thinking. Countries tend to putter along for a while and then infection rates go through the roof. Given the global demand for ventilators, if New Zealand is to get more of them we will have to build them, and will need a crash manufacturing effort to do so.

So… if Rob Fyfe really is spearheading this effort, how is his networking with the private sector being co-ordinated with the parallel efforts on ventilator supply being carried out (presumably) by the Ministry of Health ? To whom is Fyfe actually reporting? How many ventilators has his efforts put on stream, from whom, to what design, and will the usual authorising mechanisms for medical devices be waived ? Most importantly, what is the ETA of the extra supply of these machines on the hospital wards that will surely need them?

Reportedly, we have already taken steps to re-purpose anaesthetic machines as ventilators. Good. Not best practice, but a necessary step given the scarcity fix we’re in. Question : do we intend to pursue the controversial option of “splitting” – whereby one ventilator is adapted to serve two patients at once, despite the obvious problem that this creates of treating patients with potentially dissimilar needs with the same volumes of air? Pumping in too much oxygen to the wrong patient could damage the lungs, and might even be fatal.

Splitting is a fraught response to what can be a desperate situation when as one NYT headline put it, “the only other option is death.” So….what advice if any is the MoH giving to DHBs about the option of “splitting” of ventilators among two to four patients each, if and when an extreme situation develops? Here’s a Youtube video ( that has had close on a million views) on how to do it :

Currently, we simply do not know what steps the MoH is taking to increase our ventilator capacity, and we know equally little about the building programme that (hopefully) is under way to treble and quadruple our ability to cope with the treatment need that’s almost certainly coming down the pike. The sobering reality is that many people will die if we try to muddle on through with the number of ventilators we currently have available. Hate to seem alarmist…but the situation is alarming.

Footnote: A digression. While the lockdowns at home and the social distancing by pedestrians seems to be working pretty well here – people are crossing roads to avoid close contacts, keeping to the sides of footpaths etc – the one conspicuous exception seems to be joggers. In my experience, joggers are still running straight down the footpath while making little effort to give any pedestrians they encounter a wider berth than usual.

They should be taking evasion action themselves. Much of the Covid 19 transmission is via droplets in the air. While it is great that joggers are out there exercising, they need to be aware they’re also shedding and spraying their heavy breathing and sweaty droplets over a wide area. Yet most joggers seem to be expecting everyone else to see them coming, and to take evasive action. IMO they (and to a lesser extent, cyclists) have some obligation to recognise the health hazard they’re posing to others.

Another digression from ventilators for a moment. In case you’ve encountered difficulty in getting tested for Covid-19….why should this be so? After all, this is a disease where people can be carriers for days before their symptoms become apparent. Yet as community transmission picks up speed across the country, New Zealand’s testing criteria for the disease still seems to require traceable links with overseas travel and overt symptoms of infection. Why is this? One can only infer that its partly because medical centres don’t have enough reagent swabs to do a lot of tests. Reportedly, medical centres in Christchurch were getting only four swabs a day and ten on weekends.

Angus Chambers, a doctor and co-owner at Christchurch’s Riccarton Clinic on Yaldhurst Rd, said his practice was given about 10 swabs a day for Covid-19 testing. Chambers said the clinic was initially given only four swabs a day, which was increased to 10 per day in the weekend and was increasing as demand dictated……Chambers said if there was a surge in people needing tests, the clinic could run short.

Again, what is the MoH’s stock-take on its numbers of reagent swabs, and what capacity does the health system have to absorb a relaxation of the testing criteria, now that community transmission is occurring?

Footnote One. United Kingdom. In Britain, the Dyson firm (better known for its vacuum cleaners) has been among the firms that have responded to the UK government’s urgent call to build more ventilators. Here’s the registration process for UK firms that believe they have the capacityto build and supply ventilators…And here’s the design specification the UK government has come up with. The Brits also seem to recognise that the crisis calls for a relaxation of the usual testing /authorisation process for medical devices.

Footnote Two : Australia. Here’s one report on the crash programme to build ventilators that’s going on in Australia.

Australia is building towards about 10,000 ventilators for intensive care in the coronavirus crisis, a significant boost on the standing capacity in intensive care units around the country….Health Minister Greg Hunt said Chief Scientist Alan Finkel was working to source new Australian-made ventilators, which Mr Hunt said could add 5000 more “invasive and non-invasive respiratory and ventilator units”.

Again, where are the signs of an equally urgent partnership in New Zealand between government and industry, to build more ventilators?

Footnote Three : United States. There is no vaccine against stupidity, and the effort to build the ventilator stocks held in US hospitals has been hindered by the pathological narcissism of President Donald Trump, and his ongoing belittling of the crisis. Even after Trump belatedly acknowledged the crisis, he then stalled on invoking the legislation that would release federal emergency stocks of ventilators, sought to require state governors to make competitive bids for them, and told vice-PM Mike Pence to not make or take calls from those state governors (“that woman in Michigan”) who have been insufficiently appreciate of his “ leadership.”

Oh, and after GM responded to call to build more ventilators, the White House then baulked at the price, and pressed Ford Motors to do better. As one commenter on this vile pattern of presidential behaviour noted :

Basically, Trump lacks empathy for suffering. But it’s more than that: he has contempt for suffering and for anyone who suffers. To need a ventilator is disgusting, contemptible weakness.