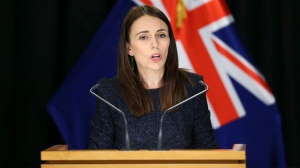 The lockdown announced yesterday by PM Jacinda Ardern is consistent with the advice from the Imperial College Covid-19 team in London, whose blueprint the NZ government has been following (a) in order to slow down the spread of the disease and (b) to even out the demands being placed on the health system. As Vox explains :

The report outlines two scenarios for combating the spread of the outbreak. One is mitigation, which focuses on “slowing but not necessarily stopping epidemic spread.” Another is suppression, “which aims to reverse epidemic growth.”

Suppression, which requires “social distancing of the entire population,” can save more lives and prevent hospitals from becoming extremely overburdened. But it needs to be maintained “until a vaccine becomes available (potentially 18 months or more),” the report states. And it warns “transmission will quickly rebound if interventions are relaxed.” Make no mistake: Suppression comes at a huge cost to our society, economy, and perhaps even personal well-being.

The idea behind suppression – which is the purpose of the lockdowns – is to significantly reduce how many people each infected person goes on to infect. The aim is to keep R for reproduction, below one ( R<1), from the levels that have been experienced elsewhere merely by mitigation procedures, where the transmission rate continues to roll on at rates more like 2 or 2.5 to one. Reducing the rate of infection not only saves lives, but (hopefully) it will enable the health system to better manage the numbers of patients presenting with serious conditions. Obviously, those goals are desirable in themselves, but the talk around them obscure just how long the suppression measures will probably need to remain in place. “Suppression” will (eventually) reduce the risk of infection for the elderly and the most vulnerable, but they will still ace the risk of infection until a vaccine is available. Safety will demand some level of isolation for months, or even well into 2021. “I think this idea … that if you close schools and shut restaurants for a couple of weeks, you solve the problem and get back to normal life — that’s not what’s going to happen,” says Adam Kucharski, an epidemiologist at the London School of Hygiene & Tropical Medicine and author of The Rules of Contagion, a book on how outbreaks spread. “The main message that isn’t getting across to a lot of people is just how long we might be in this for.”

The reason we may be in for an extended period of disruption, Kucharski says, is that the main thing that seems to be working right now to fight this pandemic is severe social distancing policies. Drop those measures — allow people to congregate in big groups again — while the virus is still out there, and it can start new outbreaks that gravely threaten public health, particularly the older and chronically ill people, those most vulnerable to severe illness.

Moreover, the achievement of herd immunity – whereby enough people have experienced infection (and survived) that the virus has difficulty finding new and vulnerable hosts – could well be disrupted if this virus proves itself to be capable of re-infecting people. At this point, we don’t know much at all about the re-infection power of the Covid-19 virus.

All of this – unfortunately – would suggest that the vulnerable and elderly will need to keep themselves relatively isolated for a considerable period of time. The virus will still be out there, even as the numbers of apparently impervious people gradually increases. Besides the implications for peoples’ lifestyles, the longer time period in isolation that will be required for the safety of the vulnerable will also mean that the economic impact of the Covid-19 virus could well endure for the rest of this year, at least. People – and the economy – will emerge from this crisis – very slowly, and very tentatively.

Public health resources and the surge

As mentioned in this column yesterday, New Zealand is badly placed – in terms of ICU beds and ventilators – to cope with a pandemic. Last year, a Johns Hopkins University study of global preparedness for the pandemic revealed in passing just how thoroughly our public health system has been run down over recent years. The figures and rankings in the tables make sobering reading for a supposedly developed country :

Those figures help to explain why our testing capacity – 1,200 to 1,500 a day – is still so low, compared to the countries ( South Korea, Taiwan) whose testing regimes we claim to be trying to emulate. Our “detection” capacity in terms of the laboratory systems, the epidemiology workforce, the real time surveillance and reporting, and the extent of data integration put New Zealand outside the top 50 countries on all of those measures. The “response” situation is also extremely bad when it comes to “Infection control practices and availability of equipment” where we rank only 77th in the world. Here’s how the John Hopkins University report assessed New Zealand on that point :

Q. Has the country published a publicly available plan, strategy, or similar document to address Personal Protective Equipment supply issues for both routine national use and during a public health emergency?

Given the lack of prior planning, the inadequate provision of protective and treatment equipment (ICU beds and ventilators are grossly inadequate for the challenges that Covid-19 will pose) the shortfalls in trained staff….our health system is in danger of being over-run, despite the best outcomes eventuating from the suppression measures announced yesterday. On the evidence from Italy, as many as 12% of detected cases will require ICU care.

One of the big problems we have in health planning in New Zealand is that – thanks to the ideologically- driven economic reforms – our public health system has been extremely fragmented into 19 DHBs. (We may have a health delivery system allegedly based on primary care, but years ago when I tried to measure the ability of people to sign up with their local GP, there were no national figures being kept on their ability to do so. As a result, I had to try and gather 19 sets of such figures.)

This fragmentation of assessment and planning will have consequences now that a pandemic is upon us. Not only do we seem to be having a great deal of trouble in counting just how many ICU beds with ventilators exist nationwide, but the resources that we do have are distributed nationwide in wildly unequal ways :

This morning, the most recent reported stocktake is cause for concern. Trebling our ICU beds (from a base of only 180 nationwide !) still seems entirely inadequate to meet the likely Covid-19 demand, and that’s even before the substantial shortages of trained staff within those units get factored in. On the subject of ventilators, it seems that nationwide we have between 176 and 221, although as RNZ says, it is not clear whether those latest attempts at a national figure include private hospitals – and presumably, there may also be some ventilators within the medical resources of the armed forces. Again, that’s a ridiculously inadequate number, given the looming challenge. It would be heartening to know from government if a crash programme of building ventilators is under way, the extent of it and the estimated time when those extra ventilators will come on stream.

Clearly, the pandemic is now exposing the risks to public health that have been generated by our insanely fragmented system of resourcing and delivery. In all likelihood, the ideology behind it will have ended up costing lives.