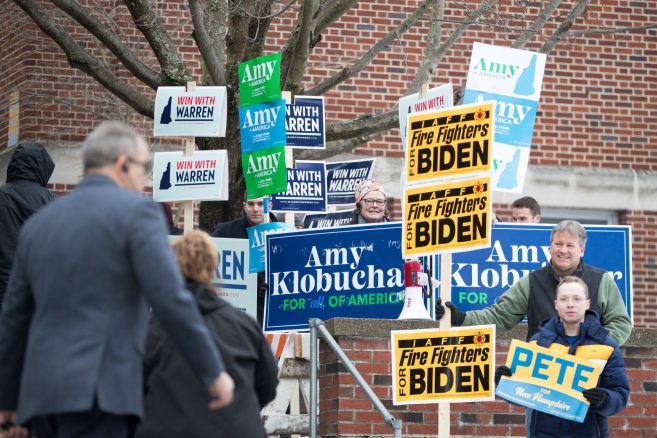 Oh, the burden of being the front-runner. In 2016, when he was still the feisty underdog, Vermont senator Bernie Sanders set his campaign alight by beating Hillary Clinton in neighbouring New Hampshire by a resounding 60-39% margin. Yesterday, Sanders won again in New Hampshire. This time though only by a 1.3% margin over Pete Buttigieg, with Minnesota senator Amy Klobuchar reasonably close behind in third place.

Sorry for the temporary surrender to the “who’s in front, who’s got the momentum” lures of horse race journalism, but Klobuchar’s rise – she’s got Klo-mentum! – has been the campaign’s main take on the New Hampshire results. Back in August 2018, I wrote a cover story about Klobuchar for Werewolf, picking her as the candidate with cross party appeal that Donald Trump would have most trouble in caricaturing, and beating.

In that story I overstated Klobuchar’s liberal credentials. She’s subsequently chosen to run as a moderate, and has left Sanders and Elizabeth Warren to fight it out among the party’s progressives. (Even so, she does have a better record on gun control than Sanders.) Otherwise, most of the strengths I cited in mid 2018 still largely hold up ( with one exception noted below.) In contrast to rivals that Trump can easily pigeonhole as socialists, big city liberals or inexperienced ingenues, Klobuchar is a three term senator who keeps on being elected by whopping margins in a fairly conservative midwestern state.

While support for Trump in Minnesota has largely held up, the state’s Republican Party treats Klobuchar as virtually unbeatable, and she won re-election there in 2018 by a 24 point margin. Currently, she enjoys 58% approval ratings in a state that Clinton won in 2016 by only 1.5 percentage points.
Finally, she’s a member of the Farmer-Labor organisation within the Democratic Party, and her family background is immigrant with miners, teachers and a sports columnist in the immediate mix.

None of this has been enough (before now) to make Klobuchar a prominent contender but – as Joe Biden continues to fade, she brings to the table a proven vote-winning record among moderates, independents and wavering Republicans. As for the other contenders…Sanders, by vanquishing Warren, is now the only candidate who represents the party’s progressive wing. Collectively though, the moderate wing and its constituency (both within and beyond the party) is arguably larger.

Among the crowded field of moderates, Biden now has to do very, very well in the South Carolina primary – especially among black voters. To beat Trump in November, the Democrats need black and Hispanic voters to come out in force and Biden remains the only candidate in a tightening, whitening field that consistently polls relatively well among minority voters. (Sanders, Buttigieg, Klobuchar and Warren barely figure on the radar among non-white voters.)

Basically then, if Biden can’t win in South Carolina, he’s toast. It is an interesting sign of just how much his horizons have shrunk. The Biden who once claimed to be the only guy who could beat Trump among voters at large is now staking everything on being the only guy who can mobilise minority voters. The Biden fadeout, and the way the moderate vote is being split between Mayor Pete and Klobuchar is also leaving an opening for Michael Bloomberg.

Bloomberg, who is the 14th richest man in the world, has spent his way into contention by buying saturation television coverage aimed entirely at delivering him a resounding result on “Super Tuesday” (March 3) when 15 states will hold their primaries simultaneously. Conveniently for Bloomberg, Biden’s moment of truth in South Carolina will have occurred only days beforehand, on February 29. A bad result for Biden, and Bloomberg would then have only Buttigieg and Klobuchar left as opponents on the moderate flank.

It is in Bloomberg’s interests to make Democrats choose between beating Trump via (a) a progressive message represented by Sanders, and which argues that America’s capitalist model is broken and in need of major changes, or (b) a moderate message whereby American capitalism is seen to have merely fallen into the wrong hands and can be healed, without requiring much in the way of systemic change. Vox journalist Roge Karma has made that same distinction, and he does a really good job in this article of explaining why Buttigieg inspires such deep hostility among young progressives.

Footnote. For those feeling uneasy about the Democratic nomination being bought by the richest guy in the field, the added danger is that the US electorate could well tire of Bloomberg well before election day. He is not charismatic, tends to be a dull speaker and has none of Buttigieg’s quick-witted ability to speak off the cuff with apparent sincerity. Also, Klobuchar, Buttigieg and Bloomberg have all taken positions in the past that seem likely to alienate black voters.
In recent days for instance, Bloomberg has made a tone-deaf attempt to rewrite his advocacy (while he was mayor of New York) of “stop and frisk” Police actions against black youth. This widely resented method of Police harassment reportedly increased sevenfold on his watch. Then and subsequently Bloomberg strongly defended those Police practices… which has made this week’s attempts to back off from them look decidedly dodgy.

For his part, Mayor Pete has his own well-documented problems in the area of policing and black communities. As for Klobuchar…while a county prosecutor in mid 2000s, she prosecuted and jailed for life a black teenager called Myon Burrell for the killing of a young black girl, on what is now seen as flimsy grounds and via a Police investigation that allegedly involved a cash-for-evidence scheme. Compared to ‘moderates’ like these, Sanders’ alleged extremism looks pretty good.