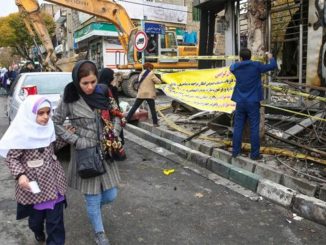 In the fortnight since the Internet got switched back on in Iran, the ferocity of the crackdown on the recent demonstrations has become evident. Reportedly, hundreds of people have been killed, thousands wounded and thousands more have been arrested. The protests broke out across Iran in mid-November, after the government abruptly raised the price of gasoline by up to 50%, with the inevitable flow-on effects to other elements in the cost of living, including food. Across the country, protesters took to the streets to vent their outrage against the price hikes — and against the leadership of an Islamic Republic now widely seen as corrupt, and lacking in moral authority. The response by the Revolutionary Guards and the basij militia was immediate, and exceptionally brutal:

In many places, security forces responded by opening fire on unarmed protesters, largely unemployed or low-income young men between the ages of 19 and 26, according to witness accounts and videos. In the southwest city of Mahshahr alone, witnesses and medical personnel said, Islamic Revolutionary Guards Corps members surrounded, shot and killed 40 to 100 demonstrators — mostly unarmed young men — in a marsh where they had sought refuge.

Unlike the Green Revolution in 2009, last month’s fuel demonstrations occurred mainly (but not exclusively) among working class, low income neighbourhoods:

Most of the nationwide unrest seemed concentrated in neighborhoods and cities populated by low-income and working-class families, suggesting this was an uprising born in the historically loyal power base of Iran’s post-revolutionary hierarchy. Many Iranians, stupefied and embittered, have directed their hostility directly at the supreme leader, Ayatollah Ali Khamenei, who called the crackdown a justified response to a plot by Iran’s enemies at home and abroad.

To repeat: the crackdown was not limited simply to low income neighbourhoods. University students have also been among the victims of repression. And see also here.

Undoubtedly, the main reason for the fuel price increases can be traced back to the harsh US sanctions, and to the budget gap in the Iranian economy caused by Iran’s resultant inability to sell much of its oil (or any other tradeable items) on global markets. As part of this deliberate strangulation of the Iranian economy, New Zealand has bowed to the threat of US sanctions and scrapped our booming $200 million beef trade with Iran.

The subsequent hardship is not being felt equally. Because the mullahs and the leadership of the Revolutionary Guards control so much of the Iranian economy, they are relatively insulated from the impact of the US sanctions. Some even manage to profit from them, via – for example – their control of the smuggling routes. As a result, an acute polarisation is occurring inside the country between a significant segment of the population who feel the regime has become hopelessly corrupt, and those other Iranians who feel impelled – for a variety of religious and political reasons – to rally to the defence of an Islamic Republic they feel is besieged by enemies at home and abroad. An account and overview of the Mahrshar massacre can be found here.

The reactions to the crackdown by the moderates within the Iranian political establishment have been deeply revealing. Former president Mohammad Khatami for instance has made a few typically bland “on the one hand/on the other hand” comments:

Speaking to a handful of political and student rights’ activists, Khatami described the protests as “breath-taking” and “deeply rooted,” that need a thorough review and fair investigation to decide the “share” of different elements in creating the “riots.”

Other moderates have been far more forthright. Mir Hussein Moussavi the former presidential candidate whose disputed election loss triggered the 2009 Green Revolution (ever since, Moussavi and his wife have been living under house arrest) even dared to compare the November crackdown to the desperate brutality of the final days of the Shah:

In his comments, Musavi made a reference to the September 1978 “Black Friday” massacre by soldiers of the shah that rallied public support and led to the toppling of the Western-backed Shah Mohammad Reza Pahlavi. “The killers of the year 1978 were the representatives of a non-religious regime, and the agents and shooters of November 2019 are the representatives of a religious government,” he said.
“Then the commander in chief was the shah. Today, here, it is the supreme leader with absolute authority.” He called on the government to “pay attention to the repercussions of the Jaleh square killings” of 1978.

Other commentators are comparing the current situation to the economic turmoil and loss of popular support experienced by the Mossadegh government in 1953, prior to the CIA-engineered coup that installed the Shah in power. Thanks to the dire economic situation and the crackdown, the moderate President Hassan Rouhani is now widely despised as ineffectual at best, and complicit at worst. The middle class voters who elected Rouhani as a counterweight to the religious hardliners will almost certainly boycott the elections due in two years time. In that vacuum, a religious hardliner – a modern equivalent of former president Mahmoud Ahmadinejad – is likely to become the next President of Iran.

That’s a pretty grim prospect, given how the Saudis, Israelis and Americans are already looking for any provocation by Teheran as a pretext for military intervention. Thanks to its recent military/diplomatic setbacks in Syria, Lebanon and neighbouring Iraq (which has seen its own waves of deadly demonstrations triggered in part by local resentment at the undue extent of Iranian influence) Iran also has very few bargaining chips left at its disposal. In sum, there is no pathway in sight to a negotiated outcome for Iran among the forces that are now in play, both internally and externally.

Footnote One: The corruption/protests/crackdown sequence is only one thread in a situation that has also included the repression of labour organising.

Reportedly, the group of sugar union leaders sentenced to years in prison (and to strokes of the lash) had been organising to get unpaid wages that were due to the workforce. They have since been released on bail.

Footnote Two: The moral distinctions involved in the recent repression have also been illuminating. Hitherto, the Koranic imperative to console and protect the “mostaz’afeen” ( the weak and the vulnerable) had been used by the mullahs to valorise the residents of the poor, working class neighbourhoods that – this time around – have turned against the regime.

Therefore, in his public exhortation for the security services to “ do their job” the Supreme Leader Ayatollah Ali Khamanei was at pains to specifically exempt the protesters from the “mostaz’afeen” status previously afforded to this vulnerable segment of society:

Supreme Leader Ayatollah Ali Khamenei denounced the protesters as thugs, while President Hassan Rouhani and Foreign Minister Mohammad Javad Zarif accused them of acting on behalf of foreign powers….Led by clerics, the regime derives its legitimacy in matters both domestic and regional from the fact that it regards itself as the defender of the mostaz’afeen (oppressed) against the mostakberin (oppressors).

The recent protests within Iran, Iraq and Lebanon challenge that presumption, since they are led by the very same working-class people the regime purports to defend – the people whose actions the regime now condemns and will punish with more violence in the future unless they can be made to direct their anger elsewhere.

In short, the defenders of the oppressed have now become their oppressors.

By all accounts, Chris Martin is a nice guy. So we have to assume the “Champion of The World “ track on Coldplay’s new album was motivated by good intentions. Namely, by Martin’s honest admiration for the late Scott Hutchison, of the Scottish band Frightened Rabbit. It has been nearly 18 months now since Hutchison killed himself after years of struggling with depression.

Reportedly, Martin modelled “Champion of The World” on Hutchison’s song “Los Angeles, Be Kind” to the point where he’s even given Hutchison a co-writing credit. Good on him.

That said, “Champion” has a set of lyrics that are clunkingly insensitive, especially given how the “co-writer” killed himself:

So I’m flying on my bicycle
Heading upwards from the Earth
I am jumping with no parachute
Out into the universe
I have E.T. on my bicycle
Because giving up won’t work
Now I’m riding on my rocketship
And I’m champion of the world

The one good thing about “Champion” is that the co-writing royalties should pour thousands of dollars into the charity that Hutchison’s family have set up to help children and adults struggling with their mental health.

His memory is being kept alive in other ways, too. There was a Frightened Rabbit tribute album released this year, and Scotland’s National Portrait Gallery has just bought and unveiled a portrait of him.

So… here’s Hutchison’s definitive rendition of the “Los Angeles, Be Kind” song that inspired Chris Martin. and – as a bonus – an endearing solo version of Frightened Rabbit’s breakthrough hit “The Modern Leper…. ”

Where to get help