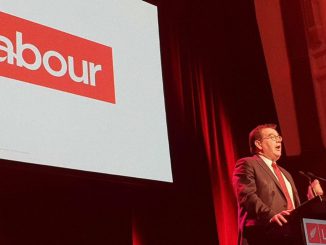 Does this sound familiar? A $7.1million budget surplus, a flagging economy not responding to repeated Reserve Bank cuts, even though these have reduced interest rates to historically low levels. Repeated calls from business for government to stimulate the economy by bringing forward the spending on infrastructure spending…. But actually this was Australia, only two weeks ago:

Prime Minister Scott Morrison is seeking to boost a flagging economy by accelerating infrastructure expenditure. In a speech at a Business Council event on Wednesday night, he will describe how the Government will respond to “uncertain” economic times. The package includes bringing forward $3.8 billion in infrastructure spending, including $1.8 billion in the next two years.

“This will support the economy in two ways — by accelerating construction activity and supporting jobs in the near term and by reaping longer run productivity gains sooner,” he is expected to say, according to a draft of his speech provided to the ABC…..In October, Treasury Secretary Steven Kennedy said the economy was growing modestly but stated there was opportunity to bring forward infrastructure spending.

So… it is kind of fascinating that a very conservative Australian government and a very cautious centre-left government in New Zealand should be speaking almost exactly the same language. As Finance Minister Grant Robertson told the party faithful at the Labour Party conference on the weekend, the government is currently finalising a list of infrastructural projects. Later at the party conference, PM Jacinda Ardern announced that the first of these efforts at combining economic stimulus with infrastructural need would be a $400 million capital injection to improve school property.

Robertson has since said that the full list of infrastructural projects the government is contemplating will be announced on December 11, at the half yearly economic and fiscal update. Presumably, there will be some reliance on public-private partnerships when it comes the delivery of the larger infrastructural projects. Yet the same argument that Robertson has been making (ie, that this is a good time to launch these projects, while interest rates are so low) should apply equally to why it would make more sense for the government to borrow the money to build these projects itself, and not rely on the private sector to do so.

After all, that’s one of the main arguments against PPP, that no corporate can borrow money as cheaply as the state. Therefore, the taxpayer will inevitably be locked in to paying more over the course of the PPP contract – partly to pay for the financing involved, and partly to deliver the profit margins that get baked into the project contracts. Moreover, the history of PPPs – in the UK, Australia and elsewhere – has been famously littered with cost overruns and quality shortfalls, as corners get cut to maximise the returns.

Regardless, Robertson signalled two years ago that PPPs were in the frame for the infrastructure build:

Robertson said the Government would involve Maori in its infrastructure goals and would look to work with the private sector including public-private-partnerships (PPPs). “We don’t believe PPPs have a place in schools and hospitals, but there is a potential for partnerships which can be used to drive productive and sustainable growth where they are appropriate,” he said.

By ruling out PPPs in schools and hospitals, that leaves transport as being the probable main area where PPPs will end up being the economic instrument for the major projects that the government has in mind. Meaning: more roads. Politically, it will be challenging for (a) the Labour-led government to rationalise how a crash programme to build more roads is compatible with its climate change targets and (b) for the Greens to rationalise their support for such a programme, heading into election year. To sell a roading package, there will need to be a large emphasis on expanding the rail network, and on improving the availability and affordability of public transport. We shall see, come December 11.

Footnote One : In recent weeks, this column has lamented the generational divide that prevails within Labour. Time and again young candidates are being told to be patient, wait in line, and allow their elders to reap the candidacies that get handed out as rewards for decades of dutiful party/union service. As mentioned, the result is that only four out of 46 Labour MPs are below 40 years of age, and only one Labour MP will be below 40, come election time next year.

In depressingly similar vein on the weekend, Grant Robertson began his Labour Party conference speech by invoking Selwyn Toogood (1916-2001) and his ancient game show Its In The Bag. Unwittingly, Robertson was highlighting the advanced age and antiquated culture of the Labour faithful in attendance. He was also reflecting a worrying perception among Labour’s leaders that when they dare to venture out into regions like Whanganui, the whole community will still be stuck in some cultural time warp. Well, newsflash: it may have been Whanganui, but it isn’t still the 1950s there. Some people in Whanganui have even been known to enjoy a slice of avocado toast with their espressos.

Footnote Two. Back to PPPs for a moment…. In the UK, PPPs are called Private Finance Initiatives (PFIs) As this 2018 summary article suggests, one advantage that PPPs offer is to Finance Ministers keen to make the books look good in the short term, regardless of the long term costs to the taxpayers actually footing the bill :

However, there’s no good reason why government itself could not accurately determine what it would cost to build and maintain a major infrastructural project. By doing so it could even avoid having its spending options ( on say, welfare) constrained in future:

While PFI increased the spending power of government agencies in the short term, the longer term commitments to pay services fees (including private financing costs) has now significantly reduced their budget flexibility.

• government paying for insurance for risks that it would self-insure under conventional procurements;

• government paying for the cost of funds held in cash reserves by the SPV [ the private sector consortium aka Special Purpose Vehicle that’s managing the project] that would not be held by the government agency for conventional procurements;

• higher adviser costs that would not be incurred under less complex conventional procurements;

• arrangement fees charged by lenders and fees paid to credit rating agencies; and

• costs associated with the SPV (e.g. company management and production and auditing of accounts) that don’t apply to conventional procurements.

All up, the NAO suggested that those avoidable cost factors have helped to make the cost of PFI schools in the UK 40% higher, and PFI hospitals 70% higher, than the non-PFI equivalents.

Presumably, this is why Robertson has ruled out using PPPs to build schools and hospitals in New Zealand. Yet it is hard to see why these added costs of borrowing, contract design, project oversight, compliance etc that are inevitably associated with PPPs would somehow magically evaporate once the subject matter changes to say, the provision of transport infrastructure.

The season of good cheer is upon us, so lets all confront and set to one side, the very worst Christmas song of all time. For my money, this tale – of a little lad who buys a pair of shoes as a Christmas gift for his dying mother, so that she’ll be looking good when she meets Jesus – has to be the champion.