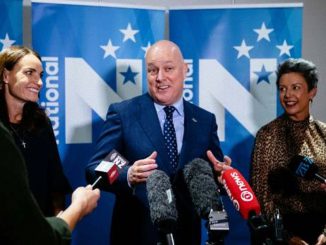 Clearly, the National Party hierarchy is very, very excited about Christopher Luxon, the 48 year old former Air NZ CEO that they’ve chosen to win the Botany seat back from Jami-Lee Ross… amid excited whispers of bigger things in line for Luxon further down the track. Such are the levels of anticipation that this week, Luxon was instantly forgiven for making up welfare policy, off the top of his head.

How come? Well, after being put under intolerable pressure in an interview with RNZ pomeranian rottweiler Susie Ferguson, Luxon went beyond the National Party’s routine bashing of beneficiaries (no full immunisation of your kids = no benefit). Lured by Ferguson into being logically consistent when applying the social contract to the welfare safety net, Luxon eventually agreed that yes indeedy, National’s draft welfare policy should also set about docking the middle income recipients of Working For Families if they failed to fully immunise their kids.

That’s not how National operates. He’ll learn. Harassing ordinary beneficiaries for political gain is fine and dandy because… either they don’t vote at all, or they vote for Labour or New Zealand First. They’re expendable. But bashing the middle class? Holy moly, what was Luxon thinking? Alienate the middle class, and voters might start thinking that National governs only on behalf of the corporate fat cats.

So it came to pass that Paula Bennett and Judith Collins were willing to smile indulgently at Luxon’s gaffe. Even Simon Bridges was ready to cut his likely successor some slack, and to pretend that National’s policy planning is still at the early planning stage where no idea about welfare is a bad idea. In other respects, Luxon did sound remarkably like John Key risen again from his ermine-lined political crypt. Given how the shine has gone off Key’s confident method of dissembling, the general public might be less susceptible to Luxon than is being expected by the party hierarchy… which seems ready to settle down with Luxon even though it is still only on its first date with him. National may be hoping for its own version of Jacindamania but right now, it is dancing with itself. From a distance, it looks more like Luxonanism.

One can (almost) sympathise with Simon Bridges. Luxon is being merrily piped on board in anticipation of Bridges’ failure at Election 2020. That’s a bind for Bridges, and it should be for some of his colleagues, too. You’d think that the endangered members of the National caucus would realise that the more that Luxon looks like National’s leader in waiting, the more this will undermine Bridges throughout election year, thereby making it less likely that some of those backbenchers will be around to welcome Luxon into the Promised Land. Not many of their seats will be as safe as Botany.

Luxon is, we’re also being told, an evangelical Christian. That’s entirely his business. Yet once again, this undermines the common stereotype that modern centre-right parties are conservative on the economy, but socially liberal in an urbane, Aucklandish kind of way. Not this party, not when it comes to the personal views of its leaders and potential leaders. Luxon, Simon Bridges, Bill English, Don Brash… none of them, personally, seem to have been social liberals. (Famously, Brash felt that beneficiaries should be publicly shamed.) This is not a sign of a modern urban party. In essence, National’s style is neo-liberalism in gumboots.

Key was the socially liberal outlier in this respect and so also – further back – was Jenny Shipley. For all of the railing against Big Government, the leading face of the National Party tends to have very little in common with modern New Zealand attitudes on privacy, gender politics, reproductive freedoms and restorative justice. It is a party that has seemed old, even when in its prime. (A “Young National” is almost an oxymoron.)

The other contentious issue raised by the premature anointing of Luxon is… why on earth is competence at business taken to be a sign of competence at the tasks of government? The qualities required to govern well – of fostering inclusiveness, of fashioning policy that respects the minority view, of pursuing re-distributive policies to counteract the workings of privilege, of being willing to invest in long-run social outcomes and in core infrastructure not conducive to user pays financing – all of that is utterly opposed to the competitively driven, short run profit taking that gets applauded and rewarded in the business world.

In particular, regulation and red tape is necessary for the public good (think of how bank de-regulation caused the GFC) and also to ensure that markets remain competitive. Yet business leaders tend to be the very last people on earth to extol the virtues of regulation.

In fact, if we have learned a single political truth in the past 40 years it would be – don’t run the government as you would run a business. The skills required are quite, quite different. If you choose to treat the economy and/or the balancing of the books as being desirable ends in themselves, you will succeed only in running up a huge deficit in unmet social needs. Alas, that is what the current government has inherited from the Key/English/Joyce trio of economic wizards.

For now though, perhaps we shouldn’t prejudge the man. Luxon may have some fresh ideas. It would be healthy for democracy if New Zealand actually had a modern, centre-right Opposition that could bring to the table some ideas about running the economy (and how social needs can be met) that are less than 40 years old.

It is just that so far, we just haven’t seen anything other than recycled ideas from National, under the Bridges leadership. So… let’s ask Luxon for some fresh policy ideas sometime before he gets swept into a position of power, simply because he is a man who once ran a successful business.

As a country with an ageing population that has neglected its skills development, New Zealand needs skilled migrants, and it needs to make them feel welcome – if only because other countries are competing to attract them. Nothing about this reality seems to cut any ice with New Zealand First, which seems to want to operate immigration policy with the raw racism of the 1950s.

The current fracas over New Zealand blindly imposing its own ideas about marriage – which seem to require that Indian migrants show evidence of premarital cohabitation – is indefensible, and damaging to all concerned. A display of public evidence of premarital sexual relations is not a core value in New Zealand culture, let alone Indian culture – but this is what Immigration NZ is now demanding before it will recognise arranged marriages as being valid, and issue visas to spouses.

Immigration policy is doing severe and avoidable damage to this country’s international reputation. For the past year, INZ’s entirely self-created traffic jam in evaluating and issuing work visas has been damaging to local business planning. It is also unjust – we take the fees upfront, but then take untold amounts of time processing the visa applications, while leaving the applicants in limbo. As a consequence, the promotion of New Zealand as an education destination – which is one of this country’s main export industries – is being directly undermined by INZ, which (while creating visa delays) is also making it harder and harder for foreign postgraduate students to make the transition to residency. Other countries, by contrast, are putting out the welcome mat to trained migrants who come to study, and stay to contribute.

Right now, immigration policy is something of a battleground between the coalition partners. NZF may of course, be wanting to pick a fight with Labour that will enable it to walk out of the coalition and be courted once again by both major parties during election year. But immigration isn’t (yet) the issue on which NZF could credibly take the nuclear option.

In the meantime, Labour needs to assert itself. It needs to ensure that INZ (a) treats Indian arranged marriages as valid marriages, and also ensure that (b) the spouses of skilled Indian migrants are not subjected to crude and intrusive interrogation by immigration officials operating from a default setting of suspicion. This isn’t the 1950s any longer, even if Shane Jones is a throwback to that era.

For the past couple of years, Dua Lipa has been the ruling queen of effortless electro dance pop, and this new single captures her at the top of her game… with retro elements harking all the way back to disco, and stopping at all the stations from Donna Summer to Daft Punk to Robyn – along the way. The lyrics in particular evoke Robyn’s “Dancing On My Own” sad heart, dancing its way to deliverance.