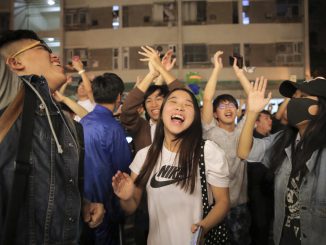 Even before the local body election results came in from Hong Kong, China had been having a p.r. nightmare this week. First, the International Consortium of Investigative Journalists released a trove of leaked cables about the mass concentration camp system that China has built to control and to “re-educate” over a million people from its Uighur minority. Reportedly, the “re-education” drive includes the deliberate destruction of the Uighur culture, language, and historical sites. Good to know the totalitarian nature of our main trading partner.

Secondly, the Australian media has been carrying a bizarre story this week about China financing and grooming a luxury car dealer called Bo “Nick” Zhao for a political career as an MP (and embedded spy for Beijing) inside the Australian federal Parliament. Instead and mysteriously, the luxury car dealer ended up dead in a Melbourne motel room. Inevitably, this story from across the Tasman will revive the suspicions long held in this country about the allegiances of National Party MP Jian Yang.

In addition, a Chinese spy called Wang “William” Liqiang https://www.smh.com.au/national/defecting-chinese-spy-offers-information-trove-to-australian-government-20191122-p53d1l.html
has just defected to Australia, reportedly taking with him a trove of documents about how China conducts its interference activities abroad – in Hong Kong, Taiwan, Australia and one assumes, in New Zealand.

Thirdly… on the economic front, China seems to have run out of ammunition (and tariff weapons) in its trade war of attrition with the United States. Judging by third quarter results, the Chinese economy is also on track for its lowest growth rate in three decades. Lower growth is not necessarily negative in itself, and could be argued as indicative of China’s growth trajectory being put on a more sustainable path. Yet the slowdown also comes amid signs that US firms are busily re-locating their supply chains from China, into the likes of Vietnam and Mexico. Overall, foreign investment in China is being deferred, pending clearer signals as to what sort of solution is likely to emerge from the China/US trade war.

Finally… the big headlines have all been about the astonishing results from this week’s Hong Kong district council elections.

Any hopes that Beijing might have had that a mythical ‘silent majority’ of voters would rise up from the recent turmoil and reject the protest movement for democratic change, have been soundly dashed.

While district councils have no power over the territory’s chief executive Carrie Lam, the elections functioned as a de facto referendum on her programme. Last time around in 2015, only 3.12 million Hong Kong residents registered to vote, and turnout was only 47.1%. This week, 4.13 million people registered, and turnout was 71.2%. The pro-Beijing candidates were routed. Pan-democrats took 17 out of 18 district councils, and won 340 of the 452 constituencies up for grabs. Many leaders of the recent demonstrations – or their proxies when the leaders themselves were denied the right to stand for office – got elected.

1. Withdraw the extradition bill that kicked off the entire crisis (this has since been achieved)
2. Launch an independent inquiry into allegations of police brutality
3. Retract any categorization of a protest on June 12 as a “riot”
4. Announce an amnesty for arrested protesters, and
5. Introduce a universal suffrage system for how the Chief Executive and the Legislative Council are elected.

The headache for Beijing is that the five demands – and the protest movement that’s marching behind them – now have a strong democratic mandate.

Unfortunately, since the Beijing leadership have convinced themselves that the demonstrations  were entirely the work of foreign agents, they’re just as likely to double down and treat the election results as evidence of just how deep the tentacles of foreign interference now reach within Hong Kong society. If there’s no silent majority… everyone in Hong Kong will be treated as being to blame.

Even as the youth of Hong Kong won a smashing victory… here at home, Labour’s greying party machine carried the day. One must never underestimate the ferocity (and stupidity) of Labour Party tribalism. Last week this column gave several reasons why 25 year old local Joe Davies – a mental health nurse and community activist – would have been the ideal Labour candidate for the rejigged Port Hills seat being vacated by Ruth Dyson.

To recap: for Election 2020, boundary changes are (a) bringing in some 6,500 voters from rural Selwyn and Banks Peninsula into the electorate, while simultaneously (b) pushing former Labour enclaves into Christchurch East. In addition, the Port Hills seat (now re-named Banks Peninsula) has always had a strong Green presence, and this might have offered a lifeline for Labour if they’d chosen a candidate able to reach out convincingly across party lines to Green voters.

In sum, this formerly safe Labour seat has become a marginal seat, yet Labour’s head office doesn’t seem to have noticed. Last Sunday night, the Labour machine ensured that a middle-aged outsider from head office got picked as its candidate in what has always been a highly parochial seat. In a safe Labour seat, Tracey McLellan (she is Labour’s de facto acting president) might have been an acceptable, albeit uninspired choice. Just as obviously, McLellan is the utterly wrong candidate for the political climate that now pertains within this seat.

As mentioned before, McLellan, 49, is part of Labour’s festering generational problem, and is clearly not part of the solution. Seemingly, Labour head office is unaware that the age of the Labour caucus – only one of its male MPs and only four out of its 46 MPs are aged below 40 – is a problem that Labour needs to address, if the party is to have a future.

To its credit, Labour has addressed its previous gender divide. (Some 21 of those current 46 Labour MPs are female.) Yet by pointedly not selecting Davies (who by general consensus gave the best speech on selection night) Labour is heaping even more weight upon Jacinda Ardern’s shoulders, when it comes to generational outreach. Beyond Ardern, Labour is outsourcing the youth vote to the Greens. It is tactically inept for it to do so. Nationwide, a roster of young Labour candidates could recruit many of the Green voters who may be feeling somewhat disaffected with the Greens performance in government.

Here’s the reality. In this new Banks Peninsula seat and also in Dunedin South – where boundary changes are similarly bringing a swathe of rural voters into a formerly safe Labour seat held by a retiring MP – a track record of service to the party machine will not be much of an electoral asset. In fact, it is far more likely to be viewed as a liability by any voters who are not already members of the Labour tribe.

All National has to do now is to pick a blue/green candidate for Banks Peninsula from the more liberal, Nikki Kaye end of its spectrum, and Labour will almost certainly be done and dusted in this seat. It will have been an avoidable loss. Along the way, a gifted young candidate could well be lost to a party that desperately needs an influx of youthful talent.

For nearly ten years, the Mexican-American musician Alan Palomo (aka Neon Indian) has been releasing catchy, drug-infected electro-pop music. Palomo used to date the prominent textile artist Alicia Scardetta, who named his band and encouraged him in his musical career even after their amicable breakup. Endearingly, his breakup song was called “I Wish I’d Dropped Acid With You”. From those days of long ago, here’s the shimmering, summery track that first made me aware of Neon Indian:

This week Palomo released an anti-Trump protest song called “Toyota Man…” The video features a ranting Orange Man puppet, and the lyrics (at 3.12) include this snappy observation:

“And remember kids, the way to build an economy on a disposable workforce is to invite them in to do the work and then kick ’em out when the work is done…”

Click on the Youtube caption buttons to get a translation of what Palomo is doing with the lyrics. As Pitchfork noted, he’s fused the melody of the old “La Cucuracha” standard with “The Star Spangled Banner”… and created a likeable, danceable protest against Trump’s border policies.