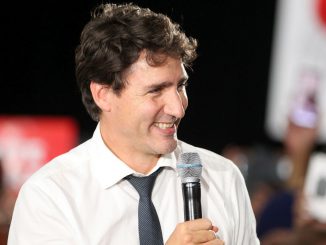 Yesterday in Canada… was a bad, bad election outcome for the fossil fuels industry. Not only were Justin Trudeau and his Liberals returned to power, but Trudeau’s most likely coalition partner – the NDP – is adamantly opposed to the huge Trans Mountain tar sands oil pipeline expansion (linking Alberta to Vancouver) that the Trudeau government had supported. Even before the votes were counted, the prospect of a Liberals/NDP minority government was being depicted as being not only Big Energy’s worst nightmare but as grounds for the western province of Alberta seceding (Wexit!) from Canada.

If Trudeau does pursue the NDP option this will necessarily pull his government further to the left – not only on climate change policy but on free trade as well, given that the NDP has been highly critical of the NAFTA rewrite. Despite the intense focus on climate change issues during the campaign, the Greens merely held onto their two seats in British Columbia and added one seat in New Brunswick. Some of this lacklustre result for the Greens can be attributed to a series of gaffes on the campaign trail by its leader, Elizabeth May, who may now resign.

What else seems significant about yesterday’s results? An ineptly led, anti-immigrant party got wiped out: Canadians may be too nice for the usual toxic stew of far right populism. There was a major resurgence by the separatist Bloc Quebecois, up from 10 seats last time around to 32 seats. Under Canada’s first past the post system, the Bloc’s gains were probably just as significant in denying Trudeau a majority government as the performance by the Conservatives. Much of the Bloc’s gains in Quebec seem to have come at the expense of the Liberals. That’s deeply ironic, given that the rationale for the Trudeau government’s biggest scandal – which involved shielding the construction firm SNC-Lavalin from criminal prosecution – was that Trudeau was trying to save the firm’s jobs (and the Liberals’ electorate seats) in Quebec.

As a potential coalition partner, the Bloc can’t be entirely ruled out, but this seems unlikely. It is almost virgin territory, though. Canada hasn’t had a coalition government since the war years of 1917, and the last time there was serious talk of a Liberals/NDP coalition (in 2008) the mere talk of it cost the then Liberals leader Stephane Dion his job. The Conservatives came close enough (they won the popular vote overall, mainly by piling up the votes in the western provinces) to enable leader Andrew Scheer to keep his job in the meantime. Yet the Conservatives’ deputy leader Lisa Raitt (a climate change denier) lost her seat, and there is some justification for thinking that if Scheer couldn’t win this election, he probably can’t be entrusted with leading the party into another contest with Trudeau.

It is a divided country though. A government led by Liberals who lost the popular vote, and who govern almost entirely from their enclave on the Atlantic coast. Conservatives in the western provinces of Alberta and Saskatchewan who feel alienated to the point of rebellion. NDP and Green minorities who distrust Trudeau, with good reason. The divisions were highlighted on election night, when – incredibly – the party leaders Andrew Scheer, Jagmeet Singh and Trudeau all gave their major post-result speeches at exactly the same time.

“How do you navigate a national agenda with a country as fractured and divided as it appears to be?” said pollster Shachi Kurl, executive director of the not-for-profit polling organization Angus Reid Institute. “And how do you do it with a government and a prime minister who last night delivered a speech acting as though he had been handed back a majority mandate, but in fact lost the popular vote?”

Footnote: Canada has a 338 seat federal government so the magic number of 170 is needed to pass legislation. Here’s how the results panned out: the Liberals went into the election with 177 seats, and ended up with 157. Most of their vote is concentrated in Ontario, in big cities such as Toronto. The Conservatives won 121 seats yesterday, an increase of 26 seats. The Bloc Quebecois knocked the NDP out of third-party status, winning 32 seats, up from only 10 beforehand. ( Voter support for the Bloc Quebecois is prone to large swings, election to election.) The NDP won only 24 seats, down from the 39 they formerly held. Their new leader and potential kingmaker is Jagmeet Singh, a practicing Sikh – and he is still a relatively unknown quantity to Canadian voters.

The Green Party went up from two to three seats, while the far right People’s Party led by former Conservative Parry heavyweight Maxime Bernier got wiped off the electoral map. Jody Wilson-Raybould, the former Liberals’ Attorney General and Cabinet Minister whose principled resistance triggered the SNC-Lavalin affair, got re-elected as an independent.

If he was one of the good ones, they probably wouldn’t like him. Justin Trudeau has yet to find his bad boy mojo, but here’s a laconic rationale for it by DJ Matthew Dear, as helped out by Canada’s indie sweethearts, Tegan and Sara Quin.