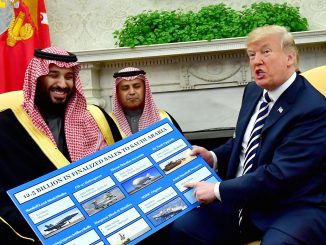 On October 2nd last year, the dissident journalist Jamal Khashoggi was murdered inside the Saudi Embassy in Istanbul, by a hit squad of assassins acting on the orders of the Saudi Crown Prince, Mohammad bin Salman. Regardless, the Trump White House has continued to strongly support the Saudi regime, despite mounting opposition to the Saudis in Congress and amongst the American public. (Reportedly only 13% of Americans would support the US joining or aiding a military response to the recent attack on Saudi oil fields.

In the past, uncritical US support for the Saudis used to be based on the kingdom’s role as an oil supplier, but the West’s is no longer energy dependent on Saudi oil production. The Americans, for instance, are almost self-sufficient these days thanks to their own efforts in fracking and shale oil extraction. So there is plenty of room for a future President to re- calibrate the US relationship with the House of Saud. In the meantime, the Saudis (and the Emirates as well ) have become heavy customers of the US arms industry, and they’ve been buying up large the “beautiful military equipment” eulogised by US President Donald Trump.

Only a couple of months ago, Trump had to use his veto power to override a Congressional attempt aimed at blocking an $8.1 billion arms sale package to Riyadh and the Emirates.

Ever since the global outrage triggered by Khashoggi’s murder…things have been going from bad to worse for the Crown Prince. Hot on the heels of the humiliating oil field attacks on his home soil, the Saudi-supported militias operating in Yemen’s northernmost province have just suffered a major defeat at the hands of Houthi rebels.

Moreover in southern Yemen, the militias bankrolled by Saudi Arabia have begun fighting (and losing) against their former allies, who are supported by the Emirates.

…the Saudi-United Arab Emirates alliance has broken up, and Saudi and Emirates proxies are actively fighting each other in southern Yemen. The nationalist forces of Mansour Hadi [supported by the Saudis] were kicked out of Aden, along with their coalition partners, the Islah movement or Yemeni Muslim Brotherhood. It is unclear whether these southern disasters affected the nationalist command and control or logistics in the far north, but it could not have helped, and certainly would have been deadly for morale. (Seeing Mansour Hadi lose a second capital, Aden, after he lost Sana’a, couldn’t have been easy for forces still loyal to him).

This four year long foray into Yemen has been Mohammad bin Salman’s pet military project all along, and it has inflicted untold misery on the Yemeni civilian population – but it has also been a costly disaster for Saudi Arabia in terms of its international standing. Oddly enough, it seemed to take Khashoggi’s grisly murder in Istanbul to finally bring the Saudi atrocities in Yemen out into the global spotlight. In fact, history may decide that it was only with the Crown Prince’s assassination plot against Khashoggi that Saudi Arabia first began to be treated internationally, as a pariah state. Its been downhill ever since.

The other major anniversary this week… is that today marks the 70th birthday of the Peoples Republic of China, which was officially founded on October 1st 1949. Today’s lead story in the South China Morning Post offers a useful summary of the vast progress that China has made, and also the economic uncertainties that it currently faces.

The ruling Communist Party has good reason to highlight China’s evolution from an economic backwater into a world economic powerhouse under its seven-decade rule. But equally, such a simplified narrative would ignore the costs and painful lessons that the Chinese people have had to endure in Beijing’s failed experiment with a Soviet-style command economy and the raw-boned capitalist rush to achieve rapid growth under the banner of socialism.

China’s paramount leader Deng Xiaoping’s embrace of the market and the permission he gave entrepreneurs to form private businesses four decades ago unleashed an economic boom unprecedented in human history. In the process, 750 million Chinese were lifted out of poverty. But the model of relying on cheap labour, state planning, rising debt levels and even intellectual property theft appears to be approaching its limit.

While China has steadily risen to where it is now the world’s second largest economy, the internal repression of its ethnic and religious minorities has if anything, only intensified. The mass incarceration of the Uighurs in “re-education” camps in Xinjiang province and the saturation use of electronic surveillance and face recognition technology all serve as pretty chilling examples to the world of Beijing’s totalitarian impulses.

As with the Khashoggi murder, China’s actions against its journalists have become a key signifier of the regime’s worst tendencies. In that respect, the personality cult being actively fostered around Xi Jinping looks like an alarming throwback to the prior era of subservience 50 years ago, under Chairman Mao. Reportedly… in order to be licensed to practice as journalists at all in China in future, aspirants will need to show that they possess a suitable level of familiarity with the writings of Chairman Xi, and must display loyalty to his Thoughts:

A notice from China’s media regulator has been sent to more than a dozen state-owned news organisations in Beijing over the last month. It instructs employees to prepare to take an exam on the “study Xi” propaganda app, launched earlier this year, in order to have their press credential renewed.

The Chairman Xi app is widely available, and it does have a few other features besides its use as a propaganda tool:

The little red app is all-encompassing, allowing users to see state media news reports, video chat with their friends, make a personal schedule and send “red envelopes” of money to friends. The app comes with a Snapchat-like messaging function where messages disappear after being read. But perhaps among its most important functions is that it can help users brush up on Xi Jinping’s thought. A university in Zhejiang called on all party groups to use the app in order to form a “stronghold” for Xi Jinping thought.

Government officials in Fujian province and Qingdao city held workshops last month stressing the “political importance” of the app, and directing local leaders to promote the app across government departments.

But there is definitely a Black Mirror aspect to the app once it gets into the hands of zealous fans of the Chairman:

Some users have reported feeling stressed about earning enough points on the platform, saying their employers are requiring them to score a certain number of points.

Similarly, this recent example of China’s piloting of face recognition technology in its university lecture rooms seems a particularly creepy instance of the state showing an undue interest in controlling even the most trivial of human responses:

Besides attendance, the system installed in the classroom can provide surveillance of the students’ learning, such as whether they are listening to the lectures, how many times they raise their heads, and whether they are playing on their phones or falling asleep,” Xu told the news website.

Yep, the all powerful state needs to know when, and how many times, its citizens are lifting their heads in dutiful obedience. Happy 70th birthday to China, regardless. Today also happens to be the birthday of Jimmy Carter… by contrast, Carter’s services to humanity began only after he was no longer occupying an ultimate position of power. Chairman Xi could learn a lot from his example.

And on Carter’s 95th birthday here’s a song for Carter by James Talley, who the former President once named as his favourite singer. Given the anti-immigrant feelings rife in the US, Woody Guthrie’s old song “Deportee” seems to be (unfortunately) relevant once again , and Talley – like Guthrie, he’s an Oklahoman – sings it with his usual sensitivity: