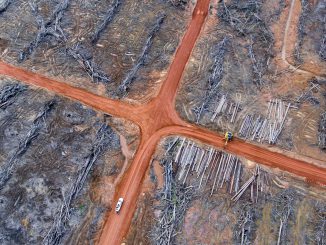 Gordon Campbell on the Greens learning to love a global destroyer of native forests, and on the stereotypes facing women at work

So few genuine checks and balances exist in New Zealand in important areas – land purchases, security and intelligence – that it is alarming when even these minimal safeguards are swept aside. Very sad then, to see that Land Information Minister Eugenie Sage has allowed a Japanese-owned forestry company called Pan Pac Forest Products to bypass the Overseas Investment Office, and buy thousands of hectares of New Zealand land, without prior vetting and (apparently) without conditions attached.

No doubt Sage and Associate Finance Minister David Clark will be able to cite reasons for letting this happen. Ministers can always point to a justification. That’s the trouble. That’s how we ended up granting citizenship to Peter Thiel. The Ministers involved thought that was a good idea at the time, too.

Yet surely, if those reasons are so compelling the Pan Pac proposal would have passed through the OIO tests with flying colours. There are at least two grounds for concern here. Without OIO scrutiny – minimal though this scrutiny commonly is – the public has lost a method of being re-assured that this endeavour is above board and that the relevant decisions have been made with at least a token amount of transparency.

Secondly, it sets a bad precedent. In future, if a centre-right government wants to fast track a foreign land purchase for what it deems to be good reasons, then the Greens and Labour will hardly be able to complain. For the record, here’s what we know of the Sage’s rationale for the proposal – which will allow Pan Pac to make 25 transactions involving 20,000 hectares of land, some of it involving conversions to forestry of existing farmland. It would have been nice to have had someone run a ruler over the opportunity costs involved in those conversions, among other things. From RNZ, (link above) :

Ms Sage defended the decision, saying Pan Pac had been in New Zealand since the 1970s, was a large exporter of quality timber and needed to secure its wood supply. “They’ve got a long standing reputation in New Zealand. They’ve increased their investment here, they’ve got a strong workforce. We want to add value to our forestry exports not just have log exports and Pan Pac is a company that can do that.”

Sure, and the coalition government has a commitment to re-forestation, as a means of reducing our climate change costs. That argument could – and should – have been put to the OIO. Historically, you’d think that a Green MP like Sage – who in a previous incarnation, opposed the extent of foreign land purchases – would have had some concerns about Pan Pac’s family tree.

For instance : formed in 1971, Pan Pac is now 100% owned by the giant Oji Paper Company of Japan. In the recent past, Oji has been accused of (a) villager displacement and native forest destruction in Laos and (b) of contributing to old forest destruction in Tasmania and (c) of pioneering research into genetically engineered trees and (d) has been listed as a major customer of Korindo, the Korean/Indonesian conglomerate accused earlier this year of clearing 30,000 hectares of native forests in Indonesia’s West Papua and Malaku regions, for the purposes of creating palm oil plantations.

No-one is accusing Pan Pac of such dodgy practices here. But given the company’s parentage, you’d think the Green Party would have wanted its operations here to be independently assessed, if only to establish just how they fit within Oji’s global strategies, which in the past have not been friendly to the planet, or to the rights of indigenous peoples.

For once, the dumbest news item of the day is not related to Donald Trump – but to the multinational accountancy firm EY, formerly known as Ernst & Young. News has just leaked online (via the journalist Emily Peck of Huff Post) of a very strange in-house seminar for top female executives, held at the firm’s US office in New Jersey in mid 2018.

Sample part of the presentation :

“Women’s brains absorb information like pancakes soak up syrup so it’s hard for them to focus… Men’s brains are more like waffles. They’re better able to focus because the information collects in each little waffle square.”

As one commenter to Peck’s article said, you can bet that who-ever thought of using breakfast options to portray gender differences in intellectual functioning, it wasn’t one of those pancake brainers. Hey, the female brain is smaller by 6-11% than the male brain, the seminar was also told. As the neuroscientist Brice McEwen commented, the only reason to talk to women about their size of their brains is to make them feel inferior to men. “It’s implying their brains don’t work as well,” McEwen said, even though there is no link between size and function. “Brain size is irrelevant.” And then there’s this:

A long list of “Invisible Rules” for men and women on Page 13 paints a bleak portrait of contrasting communication styles. It says that women often “speak briefly” and “often ramble and miss the point” in meetings. By comparison, a man will “speak at length ― because he really believes in his idea.” Women don’t interrupt effectively like men. Women “wait their turn (that never comes) and raise their hands.”

Moreover, the EY rules maintained, women often phrase their thoughts and ideas as questions. Now, it is conceivable that, as Peck herself suggested, that such “rules” – and much else of the objectionable material in the EY seminar – might have been being offered as false stereotypes, rather than as legitimate expectations. Alas, that did not appear to be the case. The rules were being treated as givens, and women were being advised to identify the best ways to navigate around these givens. Traits cited as “male” included “Acts as a Leader,” “Aggressive,” “Ambitious,” “Analytical,” “Has Leadership Abilities,” “Strong Personality” and “Willing to Take a Stand.” Traits recognised as “ female” were said to be “Affectionate,” “Cheerful,” “Childlike,” “Compassionate,” “Gullible,” “Loves Children” and “Yielding.” No mention of female “traits” that befit them for leadership roles. (Also: non-binary or non-gender-conforming people, as Peck says, don’t seem to exist in the EY universe.)

It’s a structural problem, not a matter of innate gender traits:

Organizations built and run by men tend to exhibit entrenched biases that value confidence and assertiveness in men while penalizing those traits in women; judge men based on their potential, while assessing women on what they’ve already accomplished; insist on work hours that cater to men with wives at home taking care of everything else; and, of course, ignore when women are sexually harassed ― far more often than anyone was willing to admit until very recently.

The reasons that women hit a dead end in the corporate world have little to do with their outfits, their negotiating skills or the way they stand when talking to a man. And yet the idea that women just need to do better persists.

As Peck concludes, what researchers have found is that advancing women in an organization requires work on the part of the whole organization.

Footnote One : It does seem incredible that anyone should be uttering this stuff in the second decade of the 21st century. Besides the section on physical appearance – look fit and healthy, ladies, but for God’s sake don’t look sexy – there was this kind of thing :

• Don’t directly confront men in meetings, because men perceive this as threatening. (Women do not.) Meet before (or after) the meeting instead.

• If you’re having a conversation with a man, cross your legs and sit at an angle to him. Don’t talk to a man face-to-face. Men see that as threatening.

• Don’t be too aggressive or outspoken.

Men, it would seem, are innately sensitive. Not that this is a disqualifier, it seems, for their ‘natural’ role as leaders – provided that women (can be induced to) collude in the process.

Footnote Two: Peck cites some useful research evidence useful for challenging the core EY assertions. This article from Harvard Business Review by Catherine Tinsley and Robin Ely is particularly good for research that rebuts many of the stereotypes about the attitudes and aptitudes of women in the workplace.

Footnote Three : Interestingly, EY itself has noted some of the structural factors in play here. On its own website, I found EY citing some recent research into the “glass cliff” phenomenon whereby top women executives are commonly brought in to fix corporate problems, and then fired as soon as things return to the accepted norm. To that end, female CEOs are about 45% more likely than male CEOs to be dismissed by their own companies:

And, strangely, while improved organizational performance may protect a male CEO against being fired, the same does not hold true for women. In other words, women face greater challenges when appointed to leadership positions and are provided fewer opportunities to establish their leadership capabilities…..When a female CEO gets fired, she’s usually replaced by a man..

In the light of that now-notorious work seminar for female executives this element in EY’s suggested solutions to gender discrimination in the workplace now seems to be particularly ironic:

Recognize where stereotyping exists within your organization. Use data analytics to reveal unconscious biases in recruitment, promotion decisions, performance evaluation and salaries.

This week’s deadly demonstrations against the cost of living increases in Chile have already claimed several lives. Given the Allende coup, the risk of massive repression cannot be entirely counted out. The French/Chilean musician Ana Tijoux has responded to the protests by drawing on a South American tradition whereby the public bangs loudly with spoons on their pots and pans to express their support for the demonstrators. It may be a peaceful form of protest, but its not quiet.

The rhythm Tijoux has created in this short piece is pretty irresistible, and the video contains powerful images: