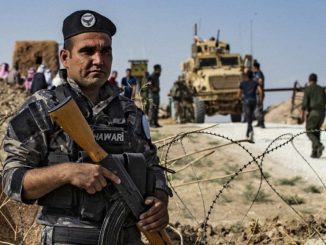 While the Kurdish fighters have previously been a formidable fighting force in northern Syria, they’ve also been highly vulnerable to air attacks, and on that score the Kurds were always reliant on US air cover during their battles against Islamic State. The Kurdish fighters, helped by some US special force “advisers” took all of the risks and suffered most of the casualties on the ground, while the US warplanes pounded IS positions from the relative safety of the skies above.

However, the Americans have now callously thrown the Kurds under the bus and created the ideal conditions for Islamic State to mount a comeback – all done so that Donald Trump can brag on the 2020 campaign trail that he brought the US troops home. How is the current fighting likely to proceed?

Well, in previous, limited military engagements with the Turks around Aleppo in mid 2016 and during last year’s Turkish attack on the former Kurdish canton of Afrin, the Kurds’ vulnerability to air attack had once again been painfully exposed. This time around, Turkey’s F 16s and F-4 fighter bombers will only slightly be inconvenienced by the token US decision on Monday to withdraw Turkey’s access to air surveillance intelligence. As Al Jazeera was predicting yesterday, the initial target of the current offensive led by Turkey’s 20th Armoured Brigade will probably be the town of Tel Abyad, before the Turkish forces head westwards and link up with their Syrian militia proxies currently operating near Manjib, west of the Euphrates.

With that in mind, the Kurds might well decide during the initial phase of the invasion at least, to withdraw deeper into their enclave and conserve what anti-air weaponry Al Jazeera says they possess – Javelin missiles – for closer engagements with say, the Turkish helicopters. Already, the Kurds have indicated they will need to re-deploy those of their troops who have been guarding IS captives in camps that (incidentally) were offering the nearest thing to an international standard of due process for IS prisoners suspected of war crimes.

Those thousands of conflict-hardened IS captives will now be released back onto the battlefield. Turkey has rarely shown much interest in fighting Islamic State, which is why the West had come to rely so heavily on the Kurds. In fact, Turkey might even encourage an IS revival, since they could then use the fundamentalists tactically to further weaken the Assad regime, and use them as a bargaining chip with the Russians.

At the very least, the Turkish invasion will trigger a fresh round of instability in Syria. Obviously, the two million refugees sheltering in Turkey that the Erdogan regime says that it aims to resettle in northern Syria will displace the Kurdish villagers already under fire from the Turkish invaders. Meaning : there will be an influx of large numbers of desperate people competing with the Kurds for scarce resources in the war-torn north. This new round of instability will again provide a recruiting ground for Islamic State. In short, the American treachery will have consequences, and the Kurds will not be the only victims.

Footnote One: Thank goodness we walked away from the ANZUS treaty in the mid 1980s, before the US got the chance to walk out on us. These days, America’s word is worthless, whether that be in trade treaties, international arms reduction treaties, or in military alliances, even – or especially – when the other side (eg Iran) is foolish enough to keep its side of the bargain. Ironically, the Kurdish YPG fighters were the only force that stepped in to help the US to defeat IS – not Israel, not Saudi Arabia, not the Emirates, not Egypt and not Turkey. In return, the US has stabbed them in the back.

The wider message being: folks, every US ally is expendable. In the darkest hours of the night, even Israel must be wondering nowadays whether it can really, really depend on the Americans any longer. Trump seems more than willing to betray any ally and to shred any existing American foreign policy interest, for his own personal advantage.

Footnote Two: The other forces that put troops on the ground in Syria and suffered significant casualties while defeating Islamic State were Hezbollah and Iran. Decades ago, the USA managed to completely erase from its collective memory that the Soviet Union had recently fought alongside it and suffered far heavier losses in the world war against fascism. With similar amnesia, you can bet that on the campaign trail next year, Trump won’t be thanking the Kurds, Iran or Hezbollah for the heavy losses they sustained while fighting IS, thereby minimising US casualties in Syria. Making America Great means Making America Forget.

When the talk turns to economics, a lot of people tune out. Mainly because it is widely believed that economics is (a) complicated, (b) dull and (c) about as sexy as linoleum. Economics is actually dead simple. Primarily, it is a set of rationalisations as to why and how rich people should get more money.

Also… far from being dull, the economic indicators zip around the place like a mouse on crystal meth; markets go up, confidence goes down, the currency flickers up and down… and none of it happens for any sound and logical reason. Even central bankers don’t know what inflation is, how best to measure it, and what really causes prices to inflate, or deflate. Omniscient, they’re not.

As for being unsexy well… hmm, they might have a point there. Because it has been recently alleged – by an economics professor! – that Reserve Bank Governor Adrian Orr is just too damn sexy and famous for the markets to handle. According to Stuff:

[Auckland University professor] Robert MacCulloch said new governor Adrian Orr was a significant change from previous governors of the central bank, and that could have a negative effect on business confidence. He said he felt Orr had changed the role from a serious office to one that catapulted him to some sort of national celebrity, which went against the traditions of the Reserve Bank.

Clearly, Professor Robert MacCulloch has led a very sheltered life, and his notion of Reserve Bank “traditions” seems remarkably selective. Within living memory, Don Brash was a Reserve Bank governor with a celebrity status that Adrian Orr can only dream about, and Brash would commonly comment publicly on matters well outside his brief, such as social policy. The markets survived him. They also survived the tenure of Alan Bollard who was – like Orr – an able and pro-active communicator.

More to the point, Orr was chosen for the job partly because he is so willing and able to communicate to the wider public. By contrast… his predecessor Graeme Wheeler was openly and regularly criticised (a) for talking only to elite gatherings of bureaucrats and academics (b) for misleading markets with inconsistent utterances when he did venture to make public statements and (c) for being so notoriously thin-skinned that he got caught out contacting the boss of BNZ economist Stephen Toplis to get Toplis censored for the sin of criticising Wheeler in public.

Frankly, Orr seems like a burst of fresh air and competence by comparison. The good professor should be focussing on whether Orr has been doing, or advocating, anything that’s untoward. Orr hasn’t. As Werewolf reported last week, in every economy apart from Kazakhstan, central bankers have been aggressively cutting interest rates all of this year. Across the Tasman, Orr’s conservative counterpart Philip Lowe at the Reserve Bank of Australia has also been slashing away at interest rates, and urging the Morrison government to embark on infrastructural spending – just as Orr has done. Somehow, this hasn’t dented the confidence of the Aussie corporate chieftains, who seems to be made of sterner stuff than our lot.

Moreover, the Aussie media has also been rationally debating the desirability of Lowe endorsing the government’s printing of money (aka quantitative easing) and/or of the state buying shares in publicly listed firms. One can only imagine the uproar here – we’re really the neo-liberal Albania of the South Pacific – if Orr ever dared to suggest anything along those lines. Instead, our economic debate remains captive to the need that business sector feels for the state to hold its hand, and help it get to feel a bit more confident. Diddums. Our captains of industry sulked about the election outcome all through the relatively good economic conditions of 2018, and now they seem to be paralysed by the threats emerging within a deteriorating international trading climate that’s beyond the direct control of Orr, or of the New Zealand government.

Instead of chastising Adrian Orr, maybe the good Professor MacCulloch would be better employed in telling our business sector why and how it should grow a backbone. Because bad times are on the way. The celebrity status of our central banker is the least of our problems.

Footnote: So it is apparently OK for an agent to omit to tell the Overseas Investment Office that the buyer they’re working for is, in fact, a foreigner.

Hmmm. Regardless, the OIO won’t declare the purchase invalid, won’t seek forfeiture of the prime land as a penalty for the bad faith displayed and won’t impose a level of fine at a level likely to serve as a deterrent. By setting such a lame precedent, the OIO risks jeopardising its entire system for vetting the foreign purchases of New Zealand land and assets. The fine it imposed (of .1% of the purchase price) was mere chicken feed.

But hey… does this mean in future, that if beneficiaries break the rules and fail to reveal and/or actively conceal that they’re in a relationship, the welfare system will show them similar compassion, forego forfeiture of their gains, and choose not to impose a deterrent penalty? Somehow, I don’t think so. Only if they’re a baroness.

Song for the Kurds

Faith, Hope and Treachery. This morning, this oldie by the US hardcore punk perennials Lard – in their heyday, a side project of the late Jello Biafra, with help from some guys from Ministry – seems pretty appropriate:

Children of the 80’s
Values shaped by Reagan greed
Don’t stick long with anything
Going gets tough,
change the channel and flee…

Everyone’s scared of everyone else
‘Specially who they love the most
No kind act goes unpunished
Show you care just shows you’re weak
So take ’em all for what they’re worth…
Number one must be preserved
Friends aren’t for keeps, they’re for dessert

Yup, that’s what the US is letting Turkey do to the Kurds. Erdogan is merely the latest in the line of dictators (Putin, Kim Yong-Un, al-Sisi, MBS) to have made Trump go all weak in the knees.