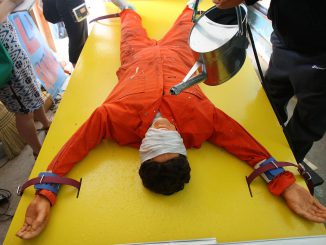 Torture is a crime under international law. New Zealand has signed (a) the UN convention against torture and (b) formal agreements about how armed conflict should be conducted. That’s the legal backdrop to the fascinating report released this week by the SIS Inspector-General. The report investigates the role of New Zealand’s security services in the CIA’s illegal system of rendition and use of secret “black” sites to interrogate and torture captives in the wake of the 9/11 attacks, and the subsequent invasion of Afghanistan.

The report amounts to a litany of failure by the leadership of the GCSB and SIS at the time. Yes, the report does exonerate New Zealand personnel from direct participation in torture. That’s welcome. But it also makes clear that – in stark contrast (see para 41) to personnel from other countries – our deployees were not adequately briefed beforehand or guided subsequently about the human rights dimension of what they, and our allies, were doing. This work included contributing to kill or capture missions, and to counter-insurgency activities. Basically, as the report puts it: “There was no training on how to operate in a combined joint environment or on how to navigate the moral ambiguities inherent in counter-insurgency operations.” In sum:

Para 86: … I have to conclude that they were vulnerable to being involved in complex foreign state activities which raised legal risks… [They] were not provided with any policies or procedures relating to the GCSB’s human rights obligations and the role of civilians within a military environment working to support military operational objectives (in contrast to providing strategic intelligence). Indeed we found no evidence that the GCSB had any human rights related policies or procedures in place at the time.

Not only did the leaders of the GCSB and SIS feel it un-important to prepare and support their staff in the field about those “moral ambiguities” they were encountering, they also felt it would be inappropriate for New Zealand to raise any concerns about such matters:

It was apparent that there was an unspoken general rule that one did not ask direct questions about the operations of Five Eyes counterparts, whether one-on-one, in bilateral meetings, or in group discussions, and despite opportunities to do so.

How come? Essentially, as the report makes crystal clear, this was because New Zealand is a junior partner in the security alliances to which we belong, and it was felt by the GCSB/SIS leadership (and, ultimately, by the Clark government) that we should shelve any human rights concerns, lest we be ostracised by the Americans for speaking up:

Para 128: The former Directors did not agree that they had an obligation, whether statutory or otherwise, to ask questions of their counterparts when credible allegations about acts of torture by partner agencies came to light…

129. It is no doubt relevant that New Zealand was and is the smallest partner in the Five Eyes intelligence alliance… It was implicit in discussions with the former Directors, and explicit in their feedback on the draft Report, that they felt constrained not to do anything which would have risked or reduced New Zealand’s role as part of the alliance or to the flow of intelligence. As noted above, they saw other risks, particularly the risk of compromising vital intelligence flows at a vital time, if they asked questions of their partner agencies, particularly in light of the official denial by the United States that the CIA’s programme included torture or other unlawful mistreatment of detainees.

At the highest levels, it was felt that New Zealand should shut up about things like torture, human rights abuses etc lest we be punished for our impertinence:

130. As one of the former Directors said, it was not realistic to think that New Zealand could have said “please explain” to the United States, the most powerful country in the world. Realistically the response would have been that New Zealand would again have been cut out of the recently resumed intelligence flow, at a time when it most needed it.

With that “don’t rock the boat” mindset firmly in place – even over the illegal, systematic use of torture – it is hardly surprising that we proceeded to defend the US when credible reports began to emerge (in the period 2002-2004) about rendition, ‘black’ sites and waterboarding. As good team players, we took sides with the Bush administration over its denials. And while New Zealand did not directly take part in the torture sessions, we were happy to use them, and benefit from them. As the report says, New Zealand forwarded questions to the American interrogators that we wanted posed to the captives being subjected to multiple waterboardings.

Also, the official SIS/GCSB briefings containing information derived from torture were then supplied to other government agencies inside New Zealand – and these reports were not amended or recalled even after (a) the illegality of the torture techniques and rendition system and (b) the unreliability of the information obtained from torture had all become widely recognised.

Some of the SIS/GCSB briefings to the PM and to government agencies included information derived from some of the most notorious victims of waterboarding:

Para 158: Abu Zubaydah was captured in March 2002. As at 6 May 2019, he was still detained at Guantanamo Bay. It is now public knowledge that following his capture he was water-boarded 83 times as part of his interrogations. Intelligence reports of his interrogations are on file from April 2002 and the early reports note that Abu Zubaydah was still under medication and recovering from bullet wounds suffered at capture.

161. In October 2002 the Director of Security wrote to five other New Zealand government agencies, providing intelligence obtained from the interrogations of Abu Zubaydah.

162. In November and December 2002, there was further correspondence between the CIA and the NZSIS about Abu Zubaydah.

That timing is interesting given that in early December 2002, the Algerian refugee Ahmed Zaoui arrived in New Zealand. It is reasonable to wonder whether Zubaydah’s torture-induced fabrications were fed into the costly and mistaken SIS perceptions of the threat allegedly posed by Zaoui. New Zealand also initiated questions that it wanted the CIA torturers to pose to another notorious detainee:

165. Khalid Sheikh Mohammed was captured in March 2003. … It is now public knowledge that commencing shortly after his capture, he was water-boarded 183 times as part of the CIA interrogation. We located a considerable number of intelligence reports from his interrogations on file, sometimes with several reports from the same date.

166. In May 2003 the NZSIS received a CIA intelligence report from the interrogation of an unnamed “senior Al-Qa’ida detainee”. At the time Service staff had annotated the report “almost certainly Khalid Sheik Mohammed”…

167. In late May 2003 the NZSIS distributed this intelligence, in a report issued to various other New Zealand government agencies.

168. In June and July 2003, there was some correspondence between the CIA and the NZSIS about this detainee. The Service provided questions for the CIA to put to the detainee and received an intelligence report in response.

In this case, – and others – it is again impossible to tell whether the inquiries made by New Zealand to the CIA actually caused the detainees to be subjected to further torture sessions:

182. It is not possible to know whether there was any cost to Khalid Sheikh Mohammed by the NZSIS providing questions to the CIA, seeking his answers about the specific issue they were concerned with. The Inquiry could not tell, at this remove, whether any of the other information provided by the NZSIS resulted in CIA interrogations of individuals, possibly involving torture, or assisted with the further detention of individuals without trial.

The Inspector-General’s report concludes by advocating better training of SIS/GCSB personnel in New Zealand’s perception of human rights law and priorities. Allegedly, such training is now commonplace. Yet the underlying pattern of deference by New Zealand to its senior alliance partners remains. It has been a feature for instance, of the NZDF’s behaviour during the Operation Burnham inquiry, and reluctance to ask the US to provide our inquiry with relevant information or release it – lest that have repercussions for us.

There has been a clear and consistent process involved: we don’t know, we don’t want to know and even worse, we feel it would be impolite to inquire if and when our security partners appear to be committing crimes – and this pattern of deference is mainly being driven by our fear of the potential blowback. To put it mildly, this doesn’t inspire public confidence that New Zealand has a valued, independent voice in such alliances. To the contrary, it suggests we are tolerated only to the extent to which we obey the signals emanating from the team captain in Washington. In all likelihood, these pressures to silently accede will only have been ramped up by the advent of the Trump administration.

In a distinct change of pace (and volume) the Icelandic folkie group Of Monsters and Men have just released one of the best dance tracks of 2019. Also, check out the sensually trippy colour effects in the video, and gritty vocals by Nanna Bryndís Hilmarsdóttir: ‘Wake me up/I’m fever dreaming”. There are spooky forces at work in the landscape of these lyrics though… and even at the best of times in Iceland, it can be pretty difficult to separate waking life from dream life: