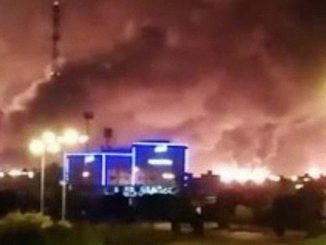 So the US and the Saudis claim to have credible evidence that those Weapons of Oil Destruction came from Iran, their current bogey now that Saddam Hussein is no longer available. Evidently, the world has learned nothing from the invasion of Iraq in 2003 when dodgy US intel was wheeled out – remember US Secretary of State Colin Powell’s charts and photos at the UN that “proved” the existence of Saddam’s mythical WMDs? – to justify the invasion of Iraq, thereby giving birth to ISIS and causing the deaths of hundreds of thousands of people. As with Saddam, US intel is being used to justify an attack on Iran that the Saudis and Israelis have been itching to launch for decades.

Iran is being lined up for retribution despite the Houthi rebels in Yemen claiming responsibility for the raid on the Saudi oil refinery. Allegedly, the Houthis lack the expertise to carry out the drone attacks, a claim repeated by a local academic on Karyn Hay’s RNZ show last night. Frankly, the underlying assumption that the Houthis are just a bunch of hicks with AK-47s (unable to respond to the foreign assault on their homeland without being told what to do by the Iranians) is almost racist in nature.

In reality, the Houthis in Yemen have ample motives (see below) and prior form in carrying out drone attacks on airfields in Saudi Arabia, Dubai and Abu Dhabi – all in retaliation for the joint Saudi/Emirates onslaught against Yemen, which has created what the UN described some time ago as the world worst humanitarian catastrophe.

It speaks volumes about our priorities that the world now seems more aghast at the disruption (and rising price) of their petrol supplies than it has been by the indiscriminate bombing of schools, hospitals and civilian centres by Saudi/Emirates forces over the past four years. In addition, the air attacks carried out by the Saudis on Yemen’s water treatment plants have triggered a cholera epidemic that has cost nearly 10,000 lives, even as a port blockade has prevented medical supplies from reaching the areas affected. (In passing, the destruction of the Yemeni port of Hodeidah has been linked to UAE plans for dominance of the sea-borne trade in the region.)

As for having the capability to launch the drone attacks… why on earth should anyone think the Houthis lack the capacity to use drones to strike deeply within Saudi territory? In May of this year, as Middle East Monitor reported at the time, the Houthis launched what was reportedly a seven-drone attack on Aramco pumping stations in the town of Al Duwadimi and in Afif, both situated in Riyadh province.

As Middle East expert Juan Cole pointed out yesterday on his website, this week’s ten-drone attack was well within range of the Houthi drones: Al Duwadimi is 1,373 kilometres from the Yemeni capital Sana’a, and Afif is 1,230 kilometres away, and the site at Abqaiq that’s now ablaze is only a further 200 kilometres away from the Houthi stronghold in Saada. According to the UN, the drones being deployed by the Houthis have a range of 2,400 kilometres. If, as some reports are indicating, this attack was assisted and co-ordinated by Yemeni Houthi sympathisers on the ground within Saudi Arabia, it distances Iran even further from meaningful responsibility.

There are the other (usual) suspects. For their part, the Israelis have been blaming the Shia militias in Iraq for master-minding the oil refinery attacks – which would certainly offer a safer target for any symbolic retaliatory air strike than anything that’s located inside Iran. Meanwhile, Al Jazeera has been citing the Israeli attacks on Iranian positions inside Syria as a potential motive for Iran supporting the Houthi attack on the Saudi refinery. Really, it is a bit like one of those Agatha Christie novels where everyone has a motive for murder, and everyone has contributed to it.

The Houthis though, have the most personal motive. They have been given ample reason to hate the Saudi/Emirates imperial forces and the rival militias that the Saudis and Emirates have been funding – forces which have recently been fighting each other in Aden. While the term “Iran backed” gets lazily applied to the Houthis, Iran is actually in no position to help the Houthis significantly. Because of the US sanctions, Iran can’t export funds to the Houthis and its military support has always been dwarfed by the lopsided scale of Saudi/US/Emirates hardware pouring into the other side of the conflict. In sum, Iran’s ability to dictate to the Houthis – who belong to a quite different sect of Shia Islam – is very limited. The main thing they have in common is their joint enmity to Saudi Arabia, which has earned it.

Do the attacks on Saudi oil refineries and oil tankers in the Gulf of Hormuz benefit Iran? Yes. The spike in oil prices will deliver a greater return to Iran from its oil smuggling activities. That price rise will also give some relief to Teheran with regard to the huge but onerous oil deal it recently concluded with China, which has just thrown the Iranian economy a lifeline by creating a viable means of circumventing the harsh US economic sanctions. The payment system involves the routing of the transactions through ‘soft’ third country funds paid to Beijing, but only at the price of Iran giving a sharp discount to the Chinese:

China recently agreed to invest some $400 billion in Iran’s oil and gas, petrochemicals, transport and energy-related manufacturing sectors over the next 25 years. This adds substance to the much reported China–Iranian investment deals signed in 2016. Now we know what is at stake for Chinese money there.

Earlier this month, Petroleum Economist magazine noted that Iran’s Foreign Minister Mohammad Javad Zarif inked the multibillion-dollar China deal during a visit to Beijing in August. China has the money. Iran has the goods. While China could not talk the Russians down in price for their oil and gas, the Chinese got a reported guarantee of 12% off benchmark crude and liquefied natural gas prices.

China is not behind the refinery attacks. But any air attack on Iranian oil installations will clearly disrupt the Beijing/Teheran deal, to the obvious delight of a Trump administration locked currently in a trade war with China. In the short term, as Cole says, it will come down to how long it takes for the Saudis to restore their production levels. The key figure here not being production per se, but the net figures available to global markets once existing contracts and domestic consumption needs (eg by the US with respect to its shale oil production output) have been subtracted.

Weirdly – but in line with his tendency to go weak in the knees in the presence of dictators – Donald Trump seems to be waiting for the Saudis to tell the Americans what to do next.

Saudi Arabia oil supply was attacked. There is reason to believe that we know the culprit, are locked and loaded depending on verification, but are waiting to hear from the Kingdom as to who they believe was the cause of this attack, and under what terms we would proceed!

Uh… so only if the Saudis say so, the US will use military force against Iran. Bizarre. Yet in line with his governing by photo opportunity, Trump has no appetite for a sustained war with Iran that would – in all likelihood – engulf the Middle East. After all, Trump came to power promising to end US involvement in foreign wars… and his shameless recent deal for fleeing from Afghanistan (which would have abandoned US allies, women and minorities like the Hazara to the mercies of the Taliban) possibly collapsed only because Kabul might fall to the Taliban inconveniently close to next year’s US presidential election. To date, the Great Deal-Makers’ style has been to make unilateral concessions, gain absolutely nothing in return (eg from North Korea) hold a press conference, and declare victory.

That schtick would be impossible to do with a country as proud and stubborn as Iran. Either (a) Trump will greenlight a Saudi invasion from which the US feigns distance or (b) the US or Israelis will conduct a symbolically reciprocal air attack on an Iranian oil installation. Problem being…if and when their territory is violated, the mullahs will retaliate. Some wars happen by design, some by accident. The escalation that’s now under way is terrifying.

Footnote. Iran’s regime is repressive, and corrupt. Agreed. But Iran has been inflated to monster status – by the US, Saudis and Israelis – to the point where this has become a self-fulfilling prophecy. In reality, Iran’s Shia regime has always had limited influence in the Middle East and across North Africa. Look at the map. Where does Iran have a significant presence? In parts of Syria, where it fought alongside the US, against ISIS. In Iraq, its influence was only made possible by the US invasion. It has influence in tiny Lebanon, and to a limited extent in Yemen. End of story.

Everywhere else in the region – Algeria, Tunisia, Morocco, Libya, Egypt, Israel, the Emirates, Oman, Saudi Arabia etc – Iran either has no influence at all, or is actively despised. There was never a rational reason for the West to create a monster out of Iran, and to define it as a regional threat. Ultimately, we’ve allowed ourselves to become captives of Saudi aggression, and on our dependence on the Kingdom’s fossil fuels – and we have been willing to tolerate Riyadh’s funding of global terrorism as a loss leader, so long as it keeps down the price of petrol at the pump.

Mali and Niger have music traditions easily relatable for Western listeners. Mali’s great Tuareg band Tinariwen has carved out a large audience in the West over the past decade, and their recently released ninth album Amadjar includes contributions from Warren Ellis of the Bad Seeds and the US indie folk artist Cass McCombs. Niger’s Group Inerane is another example of Saharan music that sounds like it could have come from some lost postpunk universe. Here’s their rocking “Awal September”…