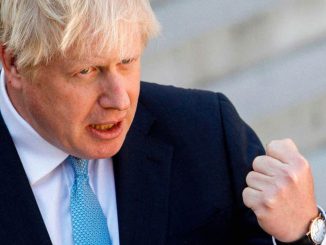 In the face of Boris Johnson’s latest provocations, the best response for Remainers and Tory rebels alike would be… to do nothing at all. Everyone needs to step back and let Johnson have his ‘no deal’ Brexit, since that’s the only way of making sure that the current Tory leadership gets to wear the consequent turmoil. Yes, it would be chaotic and very painful, but it may also be the only way of ridding the British body politic of the Brexit poisons. Hard Brexiters have to be given room to discredit themselves, by not being saved from the consequences of their folly.

To do anything else – as this column has been arguing for weeks – will be to play into Johnson’s deliberate plan to provoke his opponents into (a) blocking a “no deal’ via a vote of no confidence and/or court action thus enabling him (b) to call a general election whereby (c) he can pose as the people’s champion, bravely opposing a gaggle of leftists and Tory traitors out to frustrate the public will. Johnson wouldn’t be embarrassed in the slightest if Parliament passed a vote of ‘no confidence’ in late October or if the courts blocked a “no deal outcome” this week. Au contraire, it is precisely what he wants.

Even the Queen has been dragged in as a prop. She has been set up to deliver a speech from the throne in mid-October that will outline the Johnson government’s legislative programme, and this speech has been timed to happen only two weeks before a ‘no deal’ Brexit is due to take effect. So… if only days later, a combo of Labour MPs and Tory rebels did succeed with passing a ‘no confidence’ motion aimed at a ‘no deal’ outcome they will have walked into a trap. They will then be accused by Johnson not only of betraying the public will but also of dishonouring the Queen, by sabotaging the very programme she had just outlined to the House. The Sun will go bananas. Treason, Mr Corbyn!

Already, the polls are showing the Tories enjoy a 35-24 lead over Labour, whose muddled response to Brexit has also left it exposed to attack from the Lib Dems, who have promoted a clear Remain message – and any such split is likely to be catastrophic for the centre-left, given Britain’s archaic FPP electoral system. Jeremy Corbyn’s recent inability to rally cross-party support for a government of national unity to prevent a ‘no deal’ outcome, was a telling symptom of Labour’s current state of weakness.

The last thing that Labour should be doing right now is to trigger an election likely to produce a Conservative landslide. That result would then be used as a mandate for the neo-liberal revolution on steroids that’s being hatched by Johnson’s key adviser Dominic Cummings – who with good reason, has been likened to a combination of Steve Bannon and Dick Cheney.

Unfortunately, Labour and the Tory rebels are giving every sign of being suckered into mounting a meaningful challenge in Parliament next month or in the courts this week. In the meantime, Johnson has been going through the motions of seeking to negotiate’ with the EU, solely so that he can blame them if things finally go pear-shaped. Nothing will be his fault. He will blame his political opponents at home if Brexit is frustrated, and he will blame those intransigent Europeans if the worst should happen, and a ‘no deal’ version of Brexit does actually occur on his watch.

Footnote One: Suspending Parliament for five weeks has had the British commentariat reaching back to Charles I for precedents, and it could (arguably) be a breach of the 1688 Bill of Rights, which says “for redress of all grievances, and for the amending, strengthening and preserving of the laws, Parliaments ought to be held frequently.”

“Frequently” being the key word. Given that the last pro-rogation was in 1948 for two weeks, the courts might agree that five weeks seems a bit excessive. On the other hand, this session of Parliament has been sitting virtually non-stop since mid-2017. Enough, already with the frequency, the courts could conclude.

Footnote Two: Under Johnson as with Theresa May, the Tories are continuing to elevate the narrowly won 2016 Brexit referendum into an Iron Law of Politics that has to be obeyed, regardless. Yet as Therese Raphael of Bloomberg News says:

“There was nothing in the 2016 referendum, or indeed in the ‘Leave’ campaign that Johnson fronted, which told voters that a no-deal Brexit would be an option, let alone the government’s preferred choice. There was nothing that told the electorate of the potential costs.”

Footnote Three: As Werewolf pointed out a fortnight ago, a ‘no deal’ outcome could well deliver a body blow to our lamb exports to Britain:

Once Britain’s farm exports run headlong into the EU firewall post-Brexit, UK farm produce is going to be re-directed onto the domestic market – where it will be competing directly with New Zealand. Prices will tumble. During the subsequent marketing battle, UK producers will be able to say ‘buy local’ and play the climate change card against our farm exports, which have travelled half way round the world.

On RNZ this morning, Tim Ritchie, chief executive of the NZ Meat Industry Association voiced much the very same Brexit-driven concerns about our Christmas lamb export trade to Britain, beginning at 1.53 into this clip:

Back in 1972, a revival of the Shadows old ‘Apache’ instrumental was not only a dance hit for the Incredible Bongo Band… but the Bongos’ drumbreak has been sampled relentlessly in hip hop and pop music ever since, from Grandmaster Flash to Moby, Nas, Goldie and beyond.

Here’s a recent case from only a few weeks ago, as “Apache” is sampled by the 75 year old transgender musician Beverly Glenn-Copeland, on this beamingly positive track:

Hitherto, Glenn-Copeland’s output has mainly been in ambient music. (His 1986 electronic album Keyboard Fantasies was only recently re-discovered) A documentary about his music and life before and after transitioning is reportedly in the works.

Meanwhile, the history of the original “Apache” song can be found here.

Apparently, it began life as a tribute by British composer Jerry Lordan to the 1956 Robert Aldrich film that starred Burt Lancaster as Massai, a legendary holdout who waged a solo war in the 1890s after the surrender of Geronimo. But that’s another story.

For completists, here’s the other wing of the Incredible Bongos version of the tune, which married the original “Apache” melody to this 1950s bongo instrumental hit by Preston Epps: