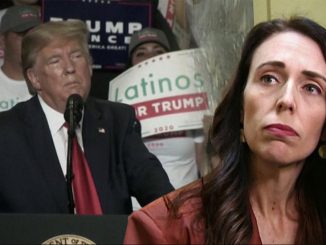 Of late, the mainstream media has plainly been suffering from Jacinda fatigue, and is going out of its way to bite the hand it used to lick. Too bad. IMO the sensible antidote to Jacinda-mania isn’t this anti-Jacinda (middle of the) road rage. Especially since during this week in particular, her alleged sins have looked so trivial, compared to what her peers are up to.

Fresh from illegally sacking Parliament and misleading the Queen, British PM Boris Johnson now seems hellbent on ignoring the law passed by Parliament to prevent a ‘no deal’ Brexit – while on the other side of the Atlantic, US President Donald Trump has been singing the praises of the nationalism that led us into two World Wars, and threatening Ukraine with the withdrawal of foreign aid unless it agrees to smear his main rival in next year’s election.

In Canada, Justin Trudeau faces being tipped out of office after a year of self-inflicted problems, including sacking his Attorney-General when she insisted on investigating a corruption scandal involving one of the country’s major corporates.

And what pray, can our commentariat come up with this week as a comparable sin by our Prime Minister? Apparently, she didn’t raise climate change during her first private meeting with Donald Trump.

Off with her head! Ardern stands accused of a failure to speak truth to power. Spare me. In fact, Ardern used the UN podium to publicly denounce the same “fierce nationalism” that Trump had just been celebrating, which strikes me as a rather more courageous example of speaking truth to power. Far more useful than telling Trump why (a) he should embrace the Paris climate change accord and (b) stop cozying up to the fossil fuel industries, at home and abroad. Hate to sound like a defeatist, but berating the Orange One for his failure to turn Green might have been something of a wasted effort.

Footnote : It may also come as a shock to political scientists like Bryce Edwards (see link above) but political leaders don’t usually denounce each other in bilateral meetings with the same passion that Greta Thunberg brought to bear at the UN this week. It isn’t a very apt comparison.

Footnote Two: Oh, and talking of climate change innovation, I forgot to mention this.

Yesterday’s Werewolf column talked about making lifestyle choices that don’t continue to harm the planet, while also taking collective action against corporate predators and polluters. (ie, it isn’t an either/or choice.) On the individual action front… Jonathan Safran Foer makes an interesting confession in his new non-fiction book We Are The Weather (good title!) In his head, Foer says, he isn’t a climate change denier, but feels that he still acts like one in most of his daily life. So do we all. In mitigation, Foer makes a special case for individuals and societies needing to reduce their intake of meat:

Given the outsize role that animal agriculture plays in global greenhouse gas emissions—estimates range between 14.5 percent and 51 percent of emissions, with the latter figure considering meat production’s role in de-forestation—refraining from consuming animal products, argues Foer, is one of the most significant actions individuals can take to help prevent global warming, along with driving less, flying less, and having fewer children. “We must either let some eating habits go or let the planet go,” he writes. “It is that straightforward, that fraught.”

Frankly, it would be great if tomorrow’s climate change actions resulted in a whole lot of New Zealanders deciding to go vegetarian. Beyond this important level of lifestyle choices, Greenpeace also called this week on the coalition government to take immediate action to combat the damage being done by our dairy and agriculture industries:

“If this Government is serious about climate action, [says Greenpeace executive chief Russel Norman] it must halve the herd, ban synthetic nitrogen fertiliser and invest significantly in a shift to more plant-based regenerative farming…Either we continue on with industrial dairying and we worsen the climate crisis, or this Government can make the right choice; to halve the herd, drive a nationwide transition to plant-based regenerative farming and increase native afforestation…,”

Ditto for the related need for the coalition government to make a meaningful response to the latest IPCC report on rising sea levels:

“If we can limit warming to 1.5 degrees through decisive action, the global sea level will be about 0.1m lower in 2100 than for 2 degrees of warming, saving at least 10 million people. But on our current trajectory, sea-level rise by 2100 could be close to one metre if global warming exceeds 3C, which is where current global government policies are taking us to. With 75% of New Zealanders living within 10 kilometres of the coast, this has very real implications for these communities.”

This seems to me a more appropriate context for complaining about the government’s lack of fortitude in speaking truth to power. The political risks of the agenda outlined by Greenpeace are obvious, and Federated Farmers have already shown a readiness to play the victim card whenever farmers are merely being criticised, let alone asked to take substantive action.

As Greta Thunberg has been saying all year… in the end, far too much hope is being pinned on science coming up with solutions to emissions somehow, sometime in future. In New Zealand, science is being expected to miraculously invent a methane- neutralising silver bullet, but – while we’re waiting – farmers seem highly resistant to making any substantial sacrifices in the meantime.

With those political realities in mind, the coalition government (and the Greens) are putting a lot of eggs in the Zero Carbon Bill basket, even though that process is still in its infancy. Ultimately, final details of the Bill will be hammered out by the as-yet unchosen members of the Climate Commission… so right now, we’ve essentially got an apparition dependent on a phantom, to give it final shape.

It is a safe bet that much will happen before the Zero Carbon Bill takes final corporeal form, and opens for business. For the record, the Bill aims to create a framework via which New Zealand can develop climate change policies in accord with the Paris Agreement. Among other things, the legislation will give legal effect to our greenhouse gas reduction targets, and will bind future governments to policies “consistent” (whatever that means in practice) with limiting global average temperature increases to 1.5 degrees Celsius above pre-industrial levels. So… at this point, the government is engaged in devising a plan to create other plans.

The noble aim is to reach zero greenhouse gases by 2050, but with almost no credible actions fit for purpose. The language is about creating 5 yearly emission reduction targets, and about the need to devise plans (somehow, sometime) to cope with rising sea levels. Frankly, I’d hate to be the person who had to explain the current state of the Zero Carbon Bill to Greta Thunberg.

Footnote One: On top of being largely an aspirational document, the draft Bill also offers some glaring escape holes to backsliders. Clause 5ZJ of the draft Zero Carbon Bill for instance, states that “No remedy or relief is available for failure to meet the 2050 target or an emissions budget, and the 2050 target and emissions budgets are not enforceable in a court of law…” while clause 5ZK says “a person or body may, if they think fit, take the 2050 target or emissions budget into account…” Yep, lets do all we can to save the planet from emissions-generated warming, but only if that’s fit with everybody.

Footnote Two: In historical terms, those Greenpeace calls to “halve the herd, penalise the polluters, bring agriculture meaningfully into the ETS etc” are not extreme demands. In living memory, agriculture has been subjected to far worse, and still survived to tell the tale. In the mid 1980s for instance, central government cold-turkeyed the farming community from its deep dependence on subsidies, as part of the Lange government’s crusade to remake the economy in accord with the free market religion of the day. No-one would want a repeat of the needless brutality that process entailed – but the point being, farming survived and eventually flourished.

So… let’s cease the panicky talk of Armageddon if and when central government should find the courage to ask farmers to once again change their behaviours for the greater good. If farmers could do it in the 1980s for the sake of the economy, surely they can do it for the sake of the planet, and future generations.

Footnote Three: To offset or not to offset? More and more people are feeling there’s something dodgy about using carbon sequestering schemes to indulge their current lifestyles for a few more precious years. If we go back to the Zero Carbon Bill for a moment, some feasible ways of weaning us off our dependence might include (a) outlawing the buying of overseas offsets altogether and (b) putting a cap of say, no more than 30–40 % on the level of local offsets permitted for emissions. Otherwise, Greta Thunberg and the generation that she has inspired will bear all the pain, while very few of the lifestyle rewards being currently indulged will be at all possible for them.

It would be nice to offer some trippily optimistic planetary vibe for tomorrow’s climate change actions but – as a soundtrack for rising anger – this “Somewhat Damaged” track by Nine Inch Nails might be more to the point.

And FYI as an overdue aside, here’s the moody NIN instrumental that was sampled by Lil Nas X for his “Old Town Road” megahit earlier this year.