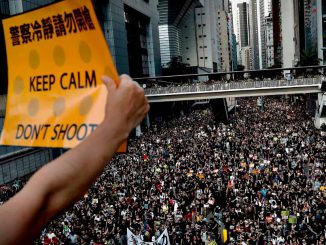 What a wretched time is being had by Hong Kong leader Carrie Lam. A few days ago, a leaked recording of her comments to a gathering of business leaders showed that she wants to resign but is being bullied by China into not doing so – while in the meantime, millions of Hong Kong’s citizens continue to protest in the streets. In the circumstances, yesterday’s move by Lam to scrap – rather than merely suspend – the hated extradition law that first triggered the protests three months ago, seems like the least she can do.

It may also be too little, too late. The protesters have no formal leadership structure, but they seem roughly united on their five central demands, as the South China Morning Post noted yesterday:

Apart from the formal withdrawal of the [extradition] legislation, the protesters have asked for the government to set up a commission of inquiry to investigate police conduct in tackling the protests, grant amnesty to those who have been arrested, stop characterising the protests as riots, and restart the city’s stalled political reform process.

China’s rigid leadership would need to be dragged kicking and screaming into meeting anything else on that list. All along, China opposed scrapping the extradition law, because it feared this would only embolden the protesters. (For the same reason, it refuses to let Lam resign.) Now, Lam is talking vaguely about offering an official inquiry, but (a) its scope and (b) its level of independence are both open to question :

…[Lam] will set up an investigative commission to look into the fundamental causes of the social unrest and suggest solutions for the way forward, stopping short of turning it into a full-fledged commission of inquiry, as demanded by protesters. Whether the committee will be independent is yet to be determined.

Ever since Britain handed over Hong Kong to China in 1997 the territory (under the “One Country, Two Systems” formula) Beijing’s leaders have been unwilling and/or unable to recognise that the citizens of Hong Kong share aspirations that differ from those that China holds dear. We’ve been here before, more than once. In 2003, a similar round of huge protests in Hong Kong over a national security law caused the law to be finally scrapped, two months later. Between 2013 -2015 the debates in Hong Kong over democracy saw a shift in the ballot box away from the so-called “pan-democrats” who favour wider voting rights towards the younger “localists” who are calling for outright independence from China.

However, because the ruling Legislative Council (Legco) has been rigged to produce a pro-Beijing majority, these aspirations have been bottled up, and frustrated. (It wasn’t accidental that the Legco chamber building became a direct target of the protests.) A few weeks ago, Werewolf described that electoral shift and the anger being generated by the rigged voting system:

Roughly speaking the [Hong Kong] electorate was deeply split in the 2016 elections: about 40% of the vote went to pro-Beijing parties, 36% went to the pan-democrats and a surprisingly high 19% of the vote was won by the localists, with the remaining 5% being non-aligned. Yet even so… despite this clear public majority (55-40 at least) won in 2016 by anti-Beijing parties, the other 35 candidates appointed to LegCo still served to ensure that pro-Beijing factions continue to dominate the Legislative Council that makes the laws and perpetuates the current system.

There’s a lot at stake. Hong Kong’s youth is fighting for its future. Under the terms of the handover agreement with Britain, Hong Kong will be formally absorbed by China in 2047, so today’s youthful protesters are fighting to retain and expand the democratic freedoms that their generation stand to lose, come 2047. They are the ones who will then have to live under Beijing’s direct rule. Unfortunately, China cannot seem to tolerate – or even at a fundamental level, comprehend – their dissent.

How can this level of incomprehension come about? As in any totalitarian state, woe betide any political underling in Beijing who signals the mere existence – let alone the validity – of any deviation from the official line. In similar fashion in New Zealand during the late 1980s, few public servants dared to express any misgivings about the wisdom of the rampant free marketeers, and their privatisation programme. (Today’s relatively moderate market economy would have been heresy 30 years ago.) Such leaders demand to be misled.

In the wake of misleading itself about Hong Kong, China seems to be genuinely shocked and surprised by the scale of the protests, and by their persistence.

Why, as the South China Morning Post reported only a month before the protests began, Vice-Premier Han Zheng – China’s top man in charge of affairs in Hong Kong and Macau – was busily telling the city’s delegates to the national congress that “the political atmosphere in Hong Kong is changing for the better” and that “Hong Kong has set on to the right path of development”. Sure, if you say so.

In late June, China’s toadies – such as deputy Ip Kwok-him, a local deputy to the national legislature – were also claiming that all was well in Hong Kong, basically because Beijing had proclaimed it to be the case:

[Ip said]“The political situation is not as complicated as before. President Xi Jinping has set all bottom lines clearly and there will be no compromise on certain issues.” Ip was referring to the city’s calls for independence and universal suffrage, adding that he saw no possibilities of rebooting political reforms in the coming five years.

“After a few years of study, Beijing’s framework for ruling Hong Kong has been settled, with President Xi laying it out on July 1 last year,” Lau said. “Who is the point man is just a matter of execution.”

All good then. Such comments only serve to convey the depth of China’s ignorance and intolerance of what is happening right under their noses. Incredibly, the pressure is reportedly still coming down from above to ensure that the Hong Kong protest movement doesn’t put a blemish on China’s National Day celebrations, due on October 1st. Clearly, Hong Kong’s struggle to be heard, and respected, will have to continue.

Johnson Has His Waterloo Moment

It has been a really bad week so far for British PM Boris Johnson too. As Bloomberg News tersely put it:

First, Boris Johnson lost his majority. Then he lost control of the House of Commons. On Wednesday, the U.K. prime minister lost a third time when lawmakers voted to block his plan for a no deal-Brexit. In power for six weeks, Johnson is now pushing for a snap election, a move also rejected by Parliament. This time, all he has to lose is his job.

Basically, Johnson’s gamble of triggering a general election in which he would cast himself as the public’s brave champion of Brexit, has – for now – failed. Crucially, Johnson couldn’t win the two thirds majority in Parliament he needs to call a snap election. For now, he’s still talking up his trust in the British people, and is scorning the ‘cowardice’ of his Labour opponents in refusing to be suckered into a general election held on Johnson’s terms.

The blustering all sounds pretty hollow, though.

What happens next is anyone’s guess. As things stand, Johnson looks like a lame duck whose actions in gutting the Conservative Party and reshaping it as UKIP in all but name, have back-fired on him. His strategy has been Trumpian to the core: ie, to recreate the Tories as a hard right populist party in the image of its leader, to silence and expel all dissenting voices, and to fill their places with ideologues. Instead, the Tory rebels have climbed back out of the dumpster and taken their revenge.

The good news among the carnage? Hmmm. At least Parliament has been re-asserting its supremacy over the Executive, as has supposed to be the case in Britain since 1688. The only other welcome prospect is that Johnson and his wretched crew may finally have to shoulder the responsibility of governing Britain through the “no deal” Brexit they have publicly claimed to fearlessly embrace, while simultaneously planning to bail out of it via a snap election. For now at least, that election ejection seat has failed them. Good. And you can bet that after three months of a ‘no deal’ Brexit under Tory rule, even the bogey of Jeremy Corbyn as PM won’t seem all that scary at all.

As punk’s first wave subsided, niche music communities – In Dunedin, New York and elsewhere – started to define what music could be. One of my favourite zones of territorial ambition has always been the Athens to Atlanta, Raleigh & Chapel Hill enclave from which REM, the B-52s and any number of lesser known bands emerged (the dBs, Pylon, Love Tractor etc) including these next two examples.

On her 1985 debut album Unsophisticated Time, Marti Jones included a great song about the elation of yielding to a romantic plunge into the unknown. Even the occasional moments of awkwardness in the lyrics seemed to fit the subject matter. Among other things, “Follow You All Over The World” is about doing your best to seem casual, even as you’re putting everything on the line :

Don’t care if you’re my weekend pal
Don’t care if I’m your sometimes gal
Wouldn’t hesitate to
Follow you all over the world.

Among the back-up singers for Jones on that debut album was Anne Richmond Boston, lead vocalist for Atlanta’s defiantly unhip Swimming Pool Qs. (Check out the album cover on the video below for an example of the band’s fuck you unhipness.) Boston was the closest thing the US had to Christine McVie, and her powerful voice carried essential Qs tracks like “Pretty On The Inside” and “Now, We’re Talking About Now”. On “More Than One Heaven” there’s more than just one victim when love gets used as fuel:

And finally for Athens completists, here’s Pylon with their beloved 1981 non-hit “Crazy…” No answers, only reasons to be strong. Hong Kong can relate.