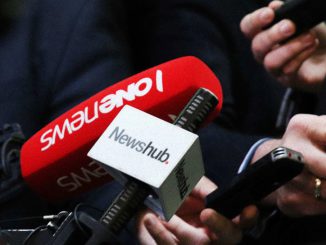 On yesterday’s Mediawatch programme, allegations were aired that left wing media bias – it is supposedly rife on state broadcasting – has been colouring the coverage of Labour’s sexual assault allegation scandal. Left wing bias in the mainstream media? This happens to be a perennial bogey of right wing pundits, who tend to regard any deviation from their own herd consensus as tantamount to treason.

For the record, the RNZ Morning Report presenters back in the day were card-carrying Commie zealots like Lindsay Perigo, Sean Plunket and Geoff Robinson, the political editor was Kremlin sleeper agent Richard Griffin, and the RNZ business editor was an evangelist for the 1980s neo-liberal reforms called Peter Verschaffelt. Then as now, the private sector bank economists called on for “objective” comment vastly outnumbered the trade union or university economists given access to the mike. Essentially, the accusation of left wing bias in the mainstream media has been a fantasy created by right wing pundits and politicians in order to project an unearned sense of victimhood.

Here’s how the triumph of the left is supposed to have come about: people who become journalists do liberal arts degrees at university and then import the bleeding heart liberal worldviews they learn at the feet of radical left lecturers back into their work in journalism. There isn’t much objective research on this subject, but a major study of content in 2012 at the BBC (another alleged hotbed of left wing opinion) showed that (a) Tory politicians outnumbered Labour ones by 50% overall on the BBC News at Six while (b) corporate/banking economists outnumbered trade union economists by a factor of nineteen to one. There is no reason to think the New Zealand figures would be much different.

In my experience, senior journalists tend to share the world views (and the tax codes) of the corporate chieftains who own the main media outlets, and the middle managers who run them. (Co-incidentally, all these groups tend to share a belief in the wisdom and efficacy of tax cuts.) From Rupert Murdoch on down, media owners have rarely been shy about using their communications properties as political and economic instruments. Rather than promoting the inevitability of class conflict, the mainstream media (RNZ included) has tended for decades to promote a certain kitbag of nostrums, which were well summarised a few years ago by Alexander Cockburn:

…almost everything wrong with the economy and society as a whole can be traced to big government, regulation, and the lack of a balanced budget. This translates into equally ancient verities: a better deal for business, a cutback on social expenditures, and healthful doses of recession and unemployment whenever necessary…

Such has been the effective consensus for the past 30 years, with the mainstream media doing its bit to promote these views as being the only sensible outlook of a Rational Gentleman of Commerce. Even Labour and the Greens joined forces a couple of years ago to enshrine those same views in their Budget Responsibility Rules. So… when the right wing pundits start complaining about left wing bias in the media we’re really talking about extinguishing the last flickers of dissent from an overwhelming consensus.

Regardless… if you can believe the likes of Matthew Hooton, the fell hand of the left is at work almost everywhere you look. As the global economy heads towards recession, the Cassandras of the right have identified the main causes of market failure which, as Matthew Yglesias ironically summarised, appear to consist of (a) Facebook, Google and Twitter failing to feature enough right wing viewpoints (b) our universities failing to employ enough teaching staff with right wing views and (c) Hollywood movies failing to convey enough right-wing messages. All part and parcel of the leftist conspiracy, folks, and its latest manifestation can be found in the scary, all pervasive “Ardern cult”.

Let’s think about that one for a moment. Most days, the same right wing pundits have trouble deciding whether Jacinda Ardern is a show pony with no real substance, or a jackbooted tyrant posing a mega-threat to all the freedoms that we hold dear. Somehow, the outside world has come to regard Ardern rather differently, and that high estimation was evident well before the Christchurch mosque attacks. Is it solely because of “left wing bias” that one might conclude that Jacinda Ardern is a politician and person of greater substance than say, Simon Bridges? Au contraire, rating Ardern more highly would seem to be the only logical conclusion of a rational evaluation. It is an objective reality. And reality, as Stephen Colbert once amusingly noted, has a well-known liberal bias.

IMO the “ media bias” allegation tends to reflect the tastes and the inclinations of the person alleging it. With that caveat in mind I’d suggest it is significant – as evidence of a right wing bias – that media coverage of Simon Bridges’ wretched performance on his recent trip to Asia has been remarkably kind, and has aroused only a fraction of the outrage and disdain being levelled at Ardern over the sexual assault allegation. If say, a David Cunliffe had performed to a similarly abysmal level as Bridges has just done on the world stage, this would be being treated as an automatic disqualifier of him heading a credible government in waiting. Instead, Bridges has been given a virtual free pass.

This is despite the fact that the overseas reaction to Bridges – from the South China Morning Post to the Asia experts based in Australia – has ranged from the incredulous to the scathing. (“A new jaw-dropping standard in cringeworthiness for Western politicians visiting China…” etc. etc.) Moreover, Bridges fawning to the Chinese at this point in the electoral cycle looks very much like National trawling for political donations from Chinese corporates for Election 2020. That should be being treated as a very bad look, given the recent National Party scandals involving Chinese donor Lang Lin and the similar scandal with regard to Chinese donor Zhang Likun.

While Bridges has been defending his meeting with China’s security chief Guo Shengkun, Democratic presidential candidate Elizabeth Warren has been calling for the US to impose sanctions on the likes of Guo and other senior Chinese politicians responsible for China’s harsh repression of its Uighur minority.

In sum, Bridges would seem to be enjoying an armchair ride from the allegedly left-leaning media compared (a) to the media roasting meted out to previous Opposition leaders like David Cunliffe and David Shearer and (b) to the fierce criticisms being levelled at Ardern herself over the handling of the sexual allegations affair.

Overall… arguably, over the past two years, Labour’s failures of delivery in government have been given far, far closer critical scrutiny by the mainstream media than to gave to National’s almost total neglect of delivery on this country’s social and environmental problems during its nine years in office. So long as belts were being tightened, budgets were being balanced and tax cuts were glimmering on the horizon, all was proceeding rather swimmingly…

Footnote One. The alleged bias shown by individual journalists and individual news outlets should be less of a concern to the general public than the bias resulting from media mergers, given the reduction in diversity that these inevitably involve. (It would be far easier for politicians to control the media’s messaging if there was only one major media player left standing for them to woo and intimidate.) When it rejected the merger of the Stuff and NZME media empires, the Commerce Commission based much of its reasoning on the likely loss of diversity across the media landscape.

Unfortunately, there have been recent signs that the Ardern government – vis its Commerce and Consumer Affairs Minister Kris Faafoi – may now be open later this year to reconsidering that initial merger rejection – given the further decline in the fortunes of the media giants pushing for the merger. That’s a real concern.

Footnote Two. For a salutary example of the weight that media owners commonly give to the views of their staff, a classic case is Newsweek, during WWII. Some of the magazine’s writers had dared to query in print the wisdom of the daylight bombing of Germany. Politician, diplomat and major Newsweek shareholder Averill Harriman was brought in to lay down the editorial line to his brother Roland, who sat on the magazine’s board of directors:

“Tell Roland that I am in dead earnest and will brook no compromise,” Averill wrote in April of 1943 [as recounted in Walter Isaacson’s book ‘The Wise Men.’] “I have not supported Newsweek for ten years through its grave difficulties to allow our hired men to use the magazine to express their narrow, un-informed or insidious ideas… Roland has my full authority to use any strong arm measures he considers necessary…”

This, as Alexander Cockburn later wrote, is the language of the ruling class talking to itself. “It should be pasted on the front gate of every journalism school as a pithy statement on the realities of the business.”

Angel of the Mourning

Angel Olsen’s first two tracks from her upcoming album suggest that she’s found fresh new ways of marrying her unique voice to equally dramatic orchestration. This video for her new single “Lark” for example, offers a startling depiction of heartbreak…