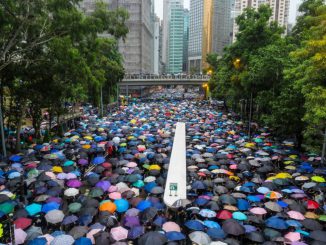 Nearly ten weeks after the huge Hong Kong protests began, managing to still get 1.7 million people onto the streets in the rain is a testament to how strong the pro-democracy movement has become.

China can bluster all it likes that the protests are an internal matter for China alone to resolve. That’s a credible position only if China ignores the formal commitments it made during the handover from Britain in 1997. “One country, two systems” means that it should require another 28 years to pass before Hong Kong has to expose its citizens to the mercies of China’s manifestly inadequate justice system.

That’s one of the really sad aspects of the Hong Kong protests. The pro-democracy protests enjoy huge support among Hong Kong’s youth, partly because the democratic systems currently at risk have only a limited time span. Under the 50 year terms of transition that Britain signed in 1997, Hong Kong is due to be fully absorbed by China in 2047. Therefore, the generation that’s currently marching in the streets is the same generation that will ultimately have to endure the handover, and live under its aftermath. They’re fighting for their future, for the imperfect freedoms that they hope to carry across the transition line – as well as marching for immediate goals like forcing Hong Kong governor Carrie Lam to resign, and for the formal scrapping of the extradition law.

To retrace: these protests were sparked by amendments to the existing extradition laws. Currently, Hong Kong has extradition treaties with a list of 20 countries. Under the proposed amendments however, the Hong Kong chief executive would have the power to hand over Hong Kong citizens (on a case by case basis) to countries with which Hong Kong currently has no extradition treaty. This would include China and Taiwan, which were deliberately excluded from the extradition list back in 1997.

According to the Hong Kong Bar Association, this omission of China was expressly because of the “fundamentally different criminal justice system operating in the mainland and concerns over the mainland’s track record on the protection of fundamental rights.” The amendments being proposed would also be retro-active, thereby enabling the chief executive to hand over a list of alleged criminals (including dissidents) on Beijing’s wanted list.

Significantly, the chief executive who would be making these extradition decisions is not an elected official. The likes of Lam are appointed by a committee that’s accountable to China – and the anti-Lam dimension of the protests reflects the discontent with the lack of true democracy that exists within the territory’s current system of governance. To put it mildly, Hong Kong’s leaders are not selected by direct, universal suffrage.

Briefly, the Hong Kong Legislative Council (aka LegCo) is comprised of 70 members, yet only half of them are elected by the public, via geographically defined electorates under a form of proportional representation. The other half of the governing council is appointed by various bodies, including corporations. There are also five other “super seats” whose candidates are vetted and pre-selected by the governing hierarchy, and are voted on via a territory-wide basis.

Despite the way power that is concentrated within LegCo by groups and individuals beholden to China, the debates on legislative reform held in 2013–2015 have resulted in wide public support at the ballot box not only for candidates advocating a wider form of democratization (these are the so called ‘pan-democrats’) but for “localist” candidates who are advocating virtual independence foir Hong Kong, from Beijing. Roughly speaking the electorate was deeply split in the 2016 elections: about 40% of the vote went to pro-Beijing parties, 36% went to the pan-democrats and a surprisingly high 19% of the vote was won by the localists, with the remaining 5% being non-aligned.

Yet even so… despite this clear public majority (55-40 at least) won in 2016 by anti-Beijing parties, the other 35 candidates appointed to LegCo still served to ensure that pro-Beijing factions continue to dominate the Legislative Council that makes the laws and perpetuates the current system. At the same time though, voters are becoming more radical and are shifting away from parties who are merely demanding a fairer system of representation, to those parties who are calling for outright independence.

In sum, Hong Kong is polarizing, in reaction to a political system that doesn’t currently reflect the public will, and which is managing the territory in the direction of something on the horizon that’s likely to be even worse, come 2047. As agents of Beijing, Carrie Lam and her corporate/triad cronies are reaping exactly what they have sown.

Footnote One. Celebrities matter. Even as Jay Z sells out NFL civil rights protester Colin Kaepernick for a stake in an NFL franchise, other celebrities are dutifully heeding Beijing’s demand that they should come out against the Hong Kong protests.

Jackie Chan, long a reliable shill for the Beijing regime, has been no surprise – but Tony Leung’s strident support for Hong Kong police brutality has been deeply disappointing. Now Liu Yifei,who plays the woman warrior in the Mulan remake, has single-handedly inspired an anti-Mulan boycott campaign.

Disturbingly, Liu tweeted that she supported the Hong Kong police so much that “they can beat me up now!”

Footnote Two: If Hong Kong was ever envisaged by Beijing as a trial balloon and experiment for what a limited form of democratization might look like, current events will have convinced the hardliners that the Chinese people cannot be entrusted with even a small amount of discretion.

Footnote Three: Surely, you’d expect the leader of the free world to support the democratic aspirations of the people of Hong Kong. Not so much, though. Instead, US President Donald Trump has set aside his trade war with China in order to express his deep sympathy and great admiration for Chinese leader Xi Jinping:

I know President Xi of China very well. He is a great leader who very much has the respect of his people. He is also a good man in a “tough business.” I have ZERO doubt that if President Xi wants to quickly and humanely solve the Hong Kong problem, he can do it. Personal meeting?

Time and again, authoritarianism brings out the fanboy in this particular US President.

Over the past week, fans of what has been described (Greil Marcus, 2001) as America’s best rock band, have been shocked to hear that drummer Janet Weiss has decided that Sleater-Kinney is taking a direction that she doesn’t feel part of anymore, and she has left on the eve of the tour meant to launch the ban’s The Center Won’t Hold album – which, irony, irony, Weiss had invited Annie Clark (aka St Vincent) to produce.

The album has polarised fans – some have defended it on the basis that Sleater-Kinney has always taken risks and challenged itself, and its base. In their 2006 masterpiece The Woods for instance, the band famously absorbed its Led Zeppelin influences into the band’s vanguard feminism. This time though, the band’s experimentation has been at the service of a tired synth poppiness that sits very awkwardly with the band’s brilliant heritage. As one commenter said, having Sleater-Kinney willingly turn themselves into a soundalike version of Imagine Dragons has been one of the worst musical moves of the century to date.

Amidst the deluge of subsequent think pieces, I think Carl Wilson’s piece on Slate has come closest to expressing the full range of mixed feelings involved:

As Wilson says, Sleater-Kinney has always mattered as much in how the music has been created, as in what was created:

Corin Tucker’s and Carrie Brownstein’s voices and guitars and Janet Weiss’ drums have interacted like equals who didn’t have to give up any of their individuality to merge into a greater whole. Sleater-Kinney has been a sound that preserved the full humanity of three women making songs about the forces that want to deny or defile their humanity. It’s music that sounds like the world it dreams of building. This isn’t accidental, of course. It was the watchword of the post-punk DIY world the band came out of, and the riot grrrl subset in particular, that your ideals should be mirrored in the process and conditions of making your art, as well as in the art itself. But Sleater-Kinney became too good, too big, too dazzling to answer to that theoretical explanation. It was like that idea had burst through a rip in space-time and fully incarnated itself as these three people and their music. As if the word had been made flesh, to borrow a phrase from a different tradition that seems apt enough because, for a lot of fans, loving Sleater-Kinney became a kind of religion.

True, and for me, the faith held even after the gig in Auckland three years ago, when Sleater-Kinney (beset by Carrie Brownstein’s head-cold and jet lag) gave the closest thing to a perfunctory performance that I’ve ever seen from them. (The two Kings Arms gigs in December 2002 and the January 2006 King Arms performance on The Woods tour were on a different planet entirely.)

Like most of us, Corin Tucker watched 9/11 unfold from afar, while sitting on a couch on the West Coast caring for her baby – and yet, the song suggests, even an apocalyptic moment like this can’t obscure the personal issues entirely: “Why can’t I get along with you?” even at terrible times like this:

From the new album here’s the track on which IMO, Carrie Brownstein comes closest to making the Clark electropop sheen co-exist with the band’s sense of urgency. Tracks like this make me think Weiss might have been premature, and that on tour, these new songs could have been made to fit alongside the back catalogue… But without her, the magical chemistry that Sleater-Kinney has embodied since 1996 has gone, apparently for good.