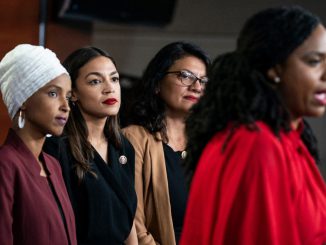 At one level, this has been the week that the Republican Party of Abraham Lincoln – which once led a civil war that ended the slave economy of the South – has now defined itself openly as being the party of white nationalism. By telling those four elected, American born and/or raised women of colour to “go home”, US President Donald Trump’s racist agenda has come out of the shadows. Until now, he could still present himself as being the populist champion of the millions of Americans who have been betrayed by the market economy. This week though, he’s openly painting himself as a white supremacist.

The openness may come as a bit of a surprise, but the message isn’t. Early in his political career, Trump was a prominent cheerleader for the so-called “birther” movement that denied Barack Obama was really an American. Then, in his inaugural address as President, Trump lamented the “carnage” occurring in the “crime infested” parts of American cities, in a speech that deliberately amplified (to white suburbanites) the links between blacks, immigrants and criminality – even as urban crime rates fell to recent historical lows, and the statistics showed that immigrants were, if anything, less likely to commit crime than American-born citizens.

Since then… Trump refused to condemn the white racists at Charlottesville, and has regularly re-tweeted white Nazi propaganda.

When the supposed leader of the free world comes out as the champion of the 20th century’s most poisonous ideology, PM Jacinda Ardern was right to condemn it, and to defend diversity. After all, it seems a bit beside the point to be striving to remove white supremacist sentiments from Facebook, Youtube and other social media, when the same messages of hate and division are spewing out of the White House.

Similarly, our post-Christchurch embrace of the Muslim community could hardly be more unlike the selective Trumpian focus on the alleged threat posed by Muslim terrorism, even as most acts of domestic terrorism in the US are being committed by the angry white males to whom Trump panders. Blacks, immigrants, Jews, “nasty” women, socialists and the media are the main villains of Trumpland, and they’re essential to its survival.

Race baiting, as a tactic

At another level, this episode was an early sample of what the election campaign is going to look like. To get re-elected, Trump needs to convince enough Americans that he is still their saviour, and that the Democratic Party is the beast of socialism that’s likely to subject honest, God-fearing Americans to the strictures of sharia law. To that end, the real target of Trump’s attack was not the four members of the so-called Squad – Alexandria Ocasio-Cortez of New York, Ilhan Omar of Minnesota, Ayanna Pressley of Massachusetts and Rashida Tlaib of Michigan. It was House Speaker Nancy Pelosi.

How come? Well, in recent weeks, Pelosi has been urging the party’s radical wing to cease attacking fellow Democrats (eg Joe Biden) and to re-focus their attacks on Trump, and the policies of his administration. Pelosi’s reasoning being – the messages that fire up the party’s progressive wing are also giving ammunition to Trump to portray the Democrats as the agents of unbridled extremism.

Therefore, by attacking the four women on the basis of their race, Trump pushed Pelosi and the Squad back together again in common defence – and thereby (for his purposes) re-branding Pelosi not as the voice of moderation, but as the defender of extremism.

We’re going to see a lot more of this from now until Election Day, 2020. For the past two years, the Republican Party has remained silent as Trump has made it over into its own racist, authoritarian image. As this conservative New York Times columnist says, the Democratic moderates are going to find it very difficult to remain in control of the party’s messaging, and keep it on the centre line:

Liberalism’s ultimate problem is that its achievements have been taken for granted. It’s moderate in an age made for reality TV. It’s an attempt to restrain passions, not inflame them. Liberalism is about treasuring your opponents, not calling them racists or traitors.

In the current moment, “Let’s not get carried away” and “Let’s play by the rules” are not great campaign slogans. Trump’s primary opponents learned that the hard way in 2016. Pelosi, Biden and the other Democratic liberals, I’m afraid, may learn that in the months ahead.

Once before of course, the world made the mistake of assuming that a populist leader was a ridiculous buffoon, whose own people would eventually tire of his racist ranting… eventually, everyone paid the price.

Footnote: Talking about the politics of division, this morning on RNZ Opposition leader Simon Bridges argued that while PM Jacinda Ardern has condemned Trump’s attack on diversity and has instructed Foreign Minister Winston Peters to pass on New Zealand’s concerns, Peters would be unlikely to do so. Fair point. Peters seems an unlikely champion of diversity. New Zealand First has a long track record of negatively stereotyping immigration in general and Asian migrants in particular – and more recently, Peters himself has expressed his own compassionate support for Nigel Farage, Boris Johnson and a Brexit exercise driven by anti-immigrant sentiments.

Meaning: It would be re-assuring if Peters said something publicly to distance himself and New Zealand from Trump’s racist messaging.

Talking about defenders of diversity… sad to hear this morning that the white South African pop musician Johnny Clegg – a unifying force in the struggle against apartheid – has died of pancreatic cancer, at the age of 66. Here’s Clegg with “Dela” …