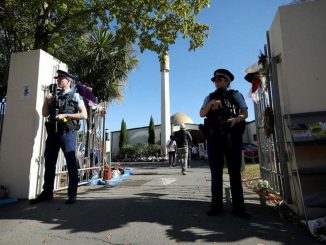 In New Zealand, there are at least two major inquiries into security/defence issues running in parallel at the moment, and the one that’s demonstrating more transparency and candour is not the one that you’d expect. Surprisingly, it has been the Royal Commission of Inquiry into the Christchurch mosque shootings that has been proceeding under a cloak of utmost secrecy. This Inquiry, remember, was set up to inform the public about the operational priorities and competence of our Police and security services in the wake of the worst mass murder in New Zealand history. The best way of informing them, it has been decided, is to deny them access to the proceedings.

That’s… incredible, really. As former race relations commissioner Joris de Bres complained last week, almost every aspect of the Royal Commission’s work has been conducted behind closed doors, and some Muslim groups and some families in particular are not being provided with the help and means that they need to participate – even while the state spends up large on its own contingents of lawyers. State agencies also have been forbidden to publish what they said, or submitted, to the Inquiry. Those people and NGOs who testify cannot discuss their evidence, even with other like-minded agencies.

At the end of this process in December, the public will apparently be expected to swallow whatever findings the inquiry has reached via its own selective reasoning, based on Lord knows what evidence. Lets just say that the process so far does not instill any confidence in the findings, which might as well have been drawn out of a hat. As de Bres says, “ It reflects the reality that a lot of this is a discussion between people with power.”

In reply a Royal Commission of Inquiry spokeswoman has defended the need for secrecy on the grounds that this was required to make sure that government agencies could “answer direct and probing questions… without restriction and under urgency”. Oh really? None of that explains why the public can’t be allowed a passive presence, to hear what questions are being asked, and what answers are being given. Sooo… is there any good news out there concerning this kind of exercise? Yes there is — and it is coming from an unlikely quarter. To date, the Operation Burnham inquiry hasn’t exactly been a model of transparency as it has gone about its investigation of the actions of the New Zealand Defence Force in Afghanistan, as alleged by Nicky Hager and Jon Stephenson in their book Hit & Run.

So, it came as a welcome shock last week to learn that one of the key dimensions of the Operation Burnham inquiry is going to be canvassed openly – and you can read about the details, and the logic involved, right here.

Basically… this public hearing will focus on the extent, cause and context of the civilian casualties that the New Zealand Defence Force initially, and comprehensively, denied had ever taken place. Incredibly, the NZDF will face (limited) cross-examination in public on this matter. The hearing will take place in Wellington, from Monday September 16 until Friday September 20.

By proceeding in this fashion, the Operation Burnham inquiry is lifting the very cloak of secrecy that the Royal Commission of Inquiry into the Christchurch mosque shootings claims to be so essential. Evidently, the Burnham inquiry believes the public has an over-riding interest in being able to hear direct and probing questions being put, and the answers being offered to them. Funny that.

Advice, at a price

As RNZ revealed last week, the numbers of communications “advisers” employed by government keep multiplying, long after they began to outnumber journalists by grotesque ratios of at least seven to one, the last time I looked. Taxpayers keep paying these advisers at salary levels that are rising at rates well in excess of the average rate of wage inflation. Reportedly in some agencies, comms salaries above $100,000 annually are routine – even though that annualised figure may be questionable in some cases, given the high prevalence of short term contracts. Unfortunately, the Iron Law of spin doctoring is that the more p.r. people you hire, the less amount of genuine information gets out. That’s not surprising. One of the prime purposes is to control the messaging.

To be fair, this trend may be inevitable. Certainly, the rise of the departmental/ministerial spin doctors can be read as a symptom of how a supposedly neutral public service has been subordinated to the political demands of ministerial messaging. It is that, but there’s more to the story. As silo’ed decision making recedes and cross-departmental policies become the norm, woe betide any procedures that neglect any of the stakeholders deemed essential by each participating ministry or department. That’s one reason for the apparent stasis, because the same basic message has to be subjected its own tweaking and/or rewrites by the various advisers who represent the corners of each empire of stakeholders who might conceivably be affected by the policy proposal in question. Neglect any of them – fail to consult or ignore their input – at your peril. That’s one reason why the output of so many, emerges so slowly. Meanwhile, the clock keeps ticking on the circa $100-120 hourly rate.

Speed is an over-rated quality in hip hop but when speed can be married to flow without undermining its musicality, then fine. This track “Venom” by the 25 year old Nigerian-born and London-based rapper Little Simz is impressive on all counts. A horror movie sense of foreboding is set up before she makes her entrance, and she then nails the self assertion and the menace before making her exit in less than two and half minutes flat:

The name Little Simz happens to be a contraction of her birth name Simbiatu Abisola Abiola Ajikawo… She’s not a one trick pony, either. From late last year, here’s the more languid but equally intense “Offence” I love the line about how she sees herself as “Jay-Z on a bad day, Shakespeare on my worst days…”