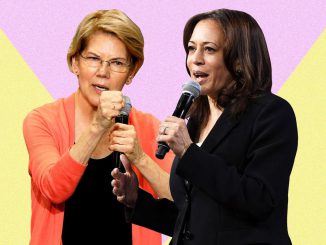 Likeability is an elusive political quality. So much so that pollsters sometimes define it as… with which politician would you be willing to share a beer? On the current evidence though, voters are less likely to regard a female politician as ‘likeable’ than a male one, and – even worse – this perception tends to become a barrier that only female candidates in the main, have to face.

These factors were highlighted by a recent CNN poll in New Hampshire that showed both Elizabeth Warren and Kamala Harris were perceived favourably (67 per cent for Warren, 54 per cent for Harris) by likely voters. However, when pollsters also asked, “Which Democratic candidate do you think is most likeable?” only 4 per cent of likely voters said they found Warren “likeable,” and only 5 per cent said the same about Harris.

The candidates that the likely voters liked best were all men: 20 per cent of them found both Vice President Joe Biden and Sen. Bernie Sanders likeable, while 18 percent found Mayor Pete Buttigieg likeable. (The favourability rating for Warren was the same as for Sanders, and higher than for either Biden or Buttigieg.)

As the Vox news service said about these poll findings:

In the New Zealand context, this goes to underline just how very unusual it has been for Jacinda Ardern to be regarded as “likeable” without that back-firing to cancel out the perceptions of her leadership skills and competence at managing the coalition government agenda. Consistent with the Vox thesis though, the public may also be willing to vote for National Party leader Simon Bridges despite not liking him much at all. Among voters, Bridges’ gender provides him with something of a safety cushion.

By and large, women politicians have to walk a more difficult tightrope. To win voter support, they need to be seen as likeable and charming, though those very qualities also put them at greater risk of being written off as show ponies and lightweights. But if they seem to be too competent and well organised, they run the reverse risk of being rejected as bossy and un-feminine (the Helengrad Syndrome). In contrast, a bloke like Bridges is assumed to possess a degree of competentence. As with many other male politicians, Bridges’ failings on the charm front can be regarded as credentials for being able to mind the store, until definitively proven otherwise.

Again, this double standard involved has been illustrated by the media treatment meted out to another US Democratic presidential candidate, Amy Klobuchar. A popular and competent Democratic senator who has regularly been re-elected by wide margins in a conservative state, Klobuchar’s campaign as the centrist, unifying candidate was derailed at the outset by allegations of her occasionally losing her temper with staff. In a male politician, this would hardly qualify as news, let alone be openly criticised. In all likelihood, it would be taken as a sign of him being a tough customer, with high standards.

For Klobuchar though, the “Mean Boss” image deterred volunteers and experienced advisers from signing on, and her campaign has never fully recovered. Fatally, she’s not seen to be a “likeable” woman. For Warren and Harris, time will tell whether the American voting public warms to their evident competence, or continues to be deterred by it.

Footnote One: One reason Ardern stands out is that her combination of likeability and competence is in such short supply on the global stage. Trump in the US, Boris Johnson in Britain, Putin in Russia, Xi in China, Bolsonaro in Brazil, Orban in Hungary, Duda in Poland, Netanyahu in Israel, bin Salman in Saudi Arabia, al-Sisi in Egypt, Assad in Syria, the mullahs in Iran, Erdogan in Turkey… It is an especially awful line-up of world leaders, all in power at the same time. Very hard to –imagine positive action on climate change being taken by such a crew.

Last week, the Twitterverse asked itself to name the fictional character who most closely resembles a Trump swing voter, and came up with Homer Simpson as a prime example. As Matthew Yglesias says, Homer is a classic secular, northern, non-college, white, Obama to Trump switch voter.

Of course, that’s assuming (a) Homer votes at all (b) that Springfield is located in Illinois, and that (c) we agree to discount the season five episode where Homer went to college and earned a degree in nuclear physics.

Also, there is a question-mark over the extent to which Homer’s political instincts will be always be dictated by Marge, or by Lisa. Here’s how The Simpsons show dealt with this issue – should Homer vote for Trump or Clinton? – at the height of the presidential campaign in 2016:

All of that aside, Homer remains a credible example of one type of Trump swing voter. Homer is not a Nazi, or a racist. He works with and interacts amiably with people of different races. But Yglesias pinpoints one excellent reason why white, non-college etc voters (such as Homer) might choose to vote for Trump. Essentially, it is because Trump talks about improving Homer’s life and the lives of people like him, while liberals talk about the need to improve the lives of people who are not like him.

Sure, those Trump promises are bogus. But for the group of white, low-income working stiffs… being paid any attention at all by a leading US politician must seem nothing short of miraculous. However, as conservative anti-Trump columnist Chris Truax indicates in USA Today, every non-crazy American now has a vested interest in ensuring that the Democratic Party picks a winning candidate in 2020. Arguably, it will be the inhabitants of small towns in four swing states that will decide the outcome. People like Homer, in towns like Springfield.

Democrats’ first thought in the morning and their last thought when they fall asleep at night should be, “How will this play in Erie, Pennsylvania?” There are four states that matter in 2020: Wisconsin, Michigan, Pennsylvania and Florida. Win three out of four of those states and Trump is a one-term president. No matter how popular something might be with activists in Los Angeles or donors in Manhattan, it’s dead weight or worse if it isn’t a winner with Rotary Club members in Kenosha, Wisconsin.

Homer rules. As others have pointed out, it helps Trump that Homer is also thick as a brick.

Talking of likeability… the 39 year old Norwegian born singer/writer Jenny Hval has come a long way – and no distance at all at times – from the years she spent in a goth metal band. On her lovely new single “Ashes to Ashes” Hval mixes together her usual obsessions – sex, death and the songwriting impulse – in a much more accessible pop form than the boundary-pushing chances she usually takes with sound, and texture. To put that another way: Hval can be quite heavy on the Nordic gloom. On her website for instance here’s how she describes her upcoming interdisciplinary work, The Practice of Love:

It also looks at the relationship between voice / presence / life and written word / absence / death: The voice comes from a living body, it is how we first relate to other humans, hearing our mother’s voice and responding to it … Whereas the dead body can no longer say “I”, and the written words are the remains that are chiseled into our tombstones. Is being drawn to words a death drive?

Hmm. Lets enjoy this trifle while we can: