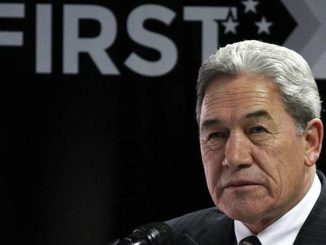 At this point, New Zealand First needs to more than double its current poll numbers to survive beyond Election Day, 2020… but that’s what Winston Peters is so very good at doing, once an election campaign begins in earnest. (No-one has ever accused Peters of peaking too soon.) Yet with the election little more than 15 months or so away, NZF activity within the governing coalition can only be expected to accelerate.

It’s not as if it has been bashful about its role to date, either. Peters and his party have done all they possibly could to leave their trademark on policy, short of capsizing the coalition entirely. So far, NZF has won battles on law and order by refusing to let the Three Strikes law be dumped, and via the gains in police numbers. Earlier this year, NZF stopped the capital gains tax in its tracks, although the Labour leadership team also seemed relatively happy to lay that particular policy to rest. On immigration (a signature policy) NZF has made no impact on the net migration figures – which rose by 10% to a 55,800 net influx in the year to April 2019 – but it can point elsewhere to the very large spending allocations it has won for the rail network, for diplomatic corps and overseas aid, and (particularly) for Defence, which has been showered with a multi-billion dollar bonanza in expensive, top shelf new equipment.

The spending commitment made to renovate the rail network will do NZF no harm in rural and provincial New Zealand, where NZF has also won itself a sizeable vote magnet in the shape of the Provincial Growth Fund. In the Rotorua region alone this week, Forestry and Regional Economic Development Minister Shane Jones announced a whole battery of small to medium size PGF projects, in forestry, energy development and tourism.

This competition for its conservative rural core vote has left National with a tactical dilemma – should it try to woo New Zealand First as a potential partner, or should it try to kill it off? A few months ago, National had seemed hopeful that Election 2020 might ultimately devolve into a ‘two horse race’ between National and Labour, with neither NZF or the Greens making it back to Parliament, given their dismal polling numbers. Since then, even that prospect has become a virtual dead end, and not simply because National (under its current leadership) would be highly unlikely to prevail anyway, in any head to head contest with Labour. The nation continues to show a distinct lack of enthusiasm for Simon Bridges as a Prime Minister in waiting, and realistically, the National caucus has no better leadership option waiting in its ranks.

So… in all likelihood, NZF will be back to play its kingmaker role again, next time around. In the rural heartland, the available space for Bridges to compete with Peters (and with Labour/Greens in the cities) would appear to be by taking National out further to the right (More Police! More prisons! Stricter parole conditions!) and on the economy (more tax cuts!) and to depict Peters as the hapless captive of the socialists in Wellington. Farmers and the fossil fuels industry can also expect a sympathetic ear from National, climate change and waterways pollution regardless.

Next time around, National will mostly be running hard on law and order, and on the messaging around its alleged competence in managing the economy, which by the second half of 2020, will be softening. If so, a sugar hit of consumption spending fuelled by tax cuts would probably be the last thing the New Zealand economy would need for its enduring health, but that seems to be what National will be offering, once again. To date, it has been significant that Bridges hasn’t come up with a single policy idea that didn’t originate back in the Key era, or before.

Whatever its fate next year, this episode in New Zealand First history will have been a useful exercise in political positioning. Over the past 25 years, life has been notoriously hard for junior partners in MMP coalitions – in that their policy gains tend to be attributed to the senior partner, even as they simultaneously cop much of the blame for propping up and enabling the worst aspects of government. This happens to be the third time that Peters, the erstwhile outsider and underdog, has shared in the task of governing – and neither Peters nor his party managed to survive those two previous experiences.

No doubt, Peters learned a lot from engaging with the Bolger and Clark governments – and he’s made more of a mark on policy this time, while still remaining a dutiful team player overall. It has been a successful balancing act for all involved – with the Greens probably most at risk of being regarded by voters as an inessential third wheel. Currently, the NZF performance looks like becoming a template and survival manual for support partners in future.

In similar vein, if the Election 2020 outcome proves that these policy gains still haven’t been sufficient for NZF to survive a junior role under MMP then arguably, nothing ever would. Failure would warn others that staying outside government (and offering selective support to a minority government) might well be a healthier option, longer term.

Footnote: Even on foreign policy, Peters has left his mark while still managing to find common ground with Labour. On Iran and on Venezuela, Peters has maintained a foreign policy line independent of our traditional allies, while the “Pacific Reset” has brought us back into closer alignment with Canberra over the containment of China – a subject that National timidly chose to ignore. And on Brexit, Peters has gone his own way on its immigration aspect (eg by supporting Nigel Farage and Boris Johnson) while still beefing up our own diplomatic presence in Europe.

Centrism, Not So Much

Talking of political positioning, this NYT article asks a reasonable question as to why Donald Trump – a guy who lost the popular vote and became President on a freakishly narrow margin in just three states – has governed ever since purely for his base alone ( Oh, and to enhance his family wealth, but that’s another story.) Why hasn’t he tried to, you know, reach out and try to expand his base?

The question assumes that (a) a comfortable centre exists any more in this polarized world, and that (b) Trump’s politics of polarization are meant merely to pander to his base, and not to protect it. The thinking being… Trump becoming reasonable and centrist (ie more like a normal politician) would arguably turn off as many of his rabid supporters as any new voters he might hope to win at this stage, through seeking to change his spots.

Judging by the polling, the NYT’s overall point is still a valid one. Trump’s base is loyal, but it remains resolutely five to ten points below what he needs for re-election. It seems that Trump is gambling that once the Democrats name their candidate, he can focus his formidable skills at caricaturing and ridiculing – and thereby turn Election 2020 into a reality TV choice as to who is more the likeable candidate. Anything to stop the election from turning into a referendum on the achievements of his administration.

Meanwhile, the Democrats have their own gaps to contend with, between rhetoric and performance. While the younger activist wing of the party is moving leftwards – and the significance of this shift is being re-inforced by the echo chamber of the Twitterverse – many of the older Democratic primary voters (ie those who are more likely to vote) and minority groups (whose main priority is getting rid of Trump) do not necessarily endorse those policy positions, or seem as likely to vote for the candidates who represent them. (Even the fact that the second choice of the current Biden and Sanders voters is each other, somewhat supports that point.) For black voters, Biden’s eight years of association with Barack Obama might well outweigh the debate revelations about his conservative 1970s stances on the busing moves to end school segregation.

This article for instance, not only draws the usual generational/minority contrasts, but also contrasts the stances being taken by the Democratic candidates on TV, with what the Democrats already in Congress are actually doing right now. Once again, it seems clear that the party of Alexandra Ocasio-Cortez is only nominally the party of Nancy Pelosi – and there’s an obvious potential for destructive division as to which presidential candidate can be embraced as representing which of the Democratic Party’s various radical, moderate and conservative factions are truly felt to comprise the party’s core identity.

Over the past 12 months, the Spanish singer and actress Rosalia has become a global superstar on the back of her two smash singles “Malamente” and “Pienso En Tu Mira” – both taken from her album El Mal Querer. Since then (and while taking time to act in Pedro Almodovar’s new movie) Rosalia has issued a stream of terrific releases reflecting her roots in flamenco, plus her ability to manage influences from urban r&b, reggaeton and its subsidiary, dembow. On this new release, she reverts to nouveau flamenco to deal with our obsessions with wealth … and both tracks on this video need to be taken together, as flamboyant/melancholic variations on the same subject.