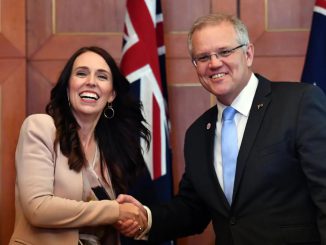 Inevitably, there was an aspect of ‘what might have been’ about the weekend’s meeting in Canberra between PM Jacinda Ardern and her Australian counterpart, Scott Morrison. If not for the surprise election result, Ardern would almost certainly have been able to score real policy gains with a Labor PM on thorny issues like (a) the deportation of Kiwis (b) the different treatment of Kiwis over there compared to Aussies here, and (c) the resettlement offer of 150 refugees that we’ve constantly made, and which Canberra has consistently rejected.

But with the centre-right still in power, those blocks to the trans-Tasman relationship remain in place. Yet while those differences are important – the deportation issue, as Ardern says, is corrosive – they’re still secondary to the joint initiative that both countries are pursuing in the Pacific, to combat China’s increasing diplomatic, economic and military presence in the region. Australia has its “Pacific pivot”. We have the “Pacific reset”. Whatever you call it, we’re partners in the same strategy and as the Australia’s 2017 Foreign Policy White Paper put it:

“The [Australian] Government is delivering a step-change in our engagement with Pacific island countries. This new approach recognises that more ambitious engagement by Australia, including helping to integrate Pacific countries into the Australian and New Zealand economies and our security institutions, is essential to the long-term stability and economic prospects of the Pacific. Our partnership with New Zealand will be central to advancing this agenda.”

The aim of both the Pacific pivot and the Pacific reset is a concept that Canberra calls “integration” whereby the socio-economic interests of Pacific island states are more closely integrated with those of Australia and New Zealand, by means of aid, trade and diplomacy. As this Australian think tank elaborated, New Zealand provides the crucial ‘human face’ to what could otherwise easily look like just a new form of neo-colonialism in the Pacific.

Family is the badge for the pivot, complementing New Zealand’s Pacific ‘reset’. It’s an explanation of belonging and responsibility—an imagining that offers more equality than talk of ‘our patch’ or ‘our backyard’.

From where Australia is sitting, New Zealand is not merely a partner in resisting China’s inroads into the Pacific – but to the Aussies, we’re a living example of how being integrated into the Australian economy can do even a nominally independent country like us, a whole world of good:

…New Zealand will be central in setting the ambition and the limits of integration. Wellington must play the special role it claims for itself in the Pacific as the essential Kiwi. New Zealand knows all the benefits of alliance with Australia, and free movement of goods, services and people. New Zealand has been integrating with Australia for 200 years, yet this embrace of the kangaroo has never hurt Kiwi identity or sovereignty (or changed the way they do their vowels).

New Zealand is proudly itself, while prospering from the kangaroo partnership. The Kiwi integration experience is a positive model for a Pacific community. If the Kiwis can do it, so can the rest of the South Pacific. Responding to all the economic, social and security needs of the South Pacific, the pivot rests on a renewed political consensus in Canberra—plus the help and example of the essential Kiwi.

So… we’re a useful, human-sized tool to explain and justify the clumsier Australians, whose policy goals might otherwise be construed as neo-colonialism. Of course, there’s a glaring flaw in both the Pacific pivot and the Pacific reset… how credible is it be to admonishing Pacific island states about the perils of engagement with China, when the economies of Australia and New Zealand are so heavily dependent on trade with China? “Do what we say, but don’t do what we do” is a hard line for Pacific states to swallow, even before you get on to Australia’s (a) lukewarm interest in climate change that poses an existential threat to Pacific nations and (b) use of the Pacific as a dumping ground for refugees.

China, of course, knows all about the lack of convictuion behind the Australian/New Zealand posturing in the Pacific. Routinely, in both Canberra and Wellington, aid budgets are commonly the first item to be slashed in any austerity drive. As the Xinhua news agency recently suggested with heavy irony, maybe the Australians could learn a thing or two from China about how to treat Pacific island states with respect:

If Australia really cares about its Pacific neighbours, it should first learn from China to treat those much smaller neighbours as equals, and refrain from behaving like an arrogant overlord. Then it could learn, again from China, to contribute constructive ideas, if not funds, to address the real concerns of the peoples in those countries.

No doubt, the progress on our joint China policy will have arisen during Ardern’s talks with Morrison. In an ideal world, Ardern – and Foreign Minister Winston Peters – would be striving to ensure that our joint efforts in the Pacific still allow room for public disagreement with Canberra on say, the need for urgent action on climate change. This joint initiative should be used as a bargaining chip, not as an instruction manual.

Basically, if the Aussies want us to serve as their friendly messenger boy for policies in the Pacific that are still largely being dictated from Canberra, they can stop deporting our citizens. A display of backbone might even make our diplomatic efforts in the Pacific look more credible.

Footnote: Once again on the weekend, the Morrison government has stonewalled on deporting Kiwis, but there is a chance that our offer to resettle their refugees might eventually be picked up. Currently there are 450 asylum seekers in Papua New Guinea, and 350 on Nauru. We have been offering to take 150 of the people who have been formally declared (by the UN) to be genuine refugees. As the Australia media have indicated though, the consistent rejection by Canberra of our offer might soon be revisited, once the current deal with the US on resettlement is concluded:

… There is a sense among some in the Government the [NZ] offer may be accepted once the existing resettlement deal with the United States is exhausted. That agreement, made by Malcolm Turnbull and Barack Obama, angered Donald Trump. But US authorities have accepted some refugees under the arrangement.

Two or three years ago, the English poet/singer Kate Tempest knocked out local audiences with a series of fiery live shows that were part performance art, and part collective exorcism – and reportedly, she did much the same a few weeks ago at the Glastonbury festival. The first two tracks of her recent material are introspective, but they’re as passionate as ever: