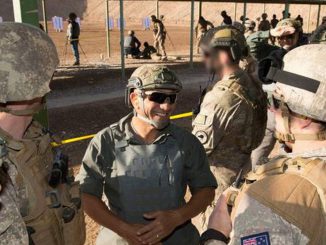 So, New Zealand is pulling out of its military role at Camp Taji in Iraq, where in partnership with the Australians, we currently provide about a quarter of the personnel engaged in a programme that trains Iraqi soldiers. (The Australians currently have about 300 troops stationed at Taji.) Our presence will reduce in stages from the current force of 95 troops to 75 next month to 45 in January and then to zero by this time next year. As a backstop… come June 2020, Cabinet will consider our participation in the multi-national Defeat ISIS coalition.

One fascinating aspect of this withdrawal decision is that it is not a case of victory over ISIS having being declared and everyone else going home at the same time, too. Only a couple of months ago, Canada announced that it would be extending its 250-strong training force until March 2021 at least.

Moreover, Canada has also just taken over command of a new multinational non-combat training mission called NATO Mission Iraq. Instead of directly training the Iraqi troops, this new NATO endeavour will be training Iraqi security forces on how to train their own troops, and the new NATO mission will also be engaged in building military academies and schools to enhance the long term professionalism of the Iraqi security forces. As NATO secretary general Jens Stoltenberg told the Kurdistan News last year, this new mission marks a long term commitment deemed essential to consolidate the battlefield gains against ISIS. Other countries have stressed the need to stay the course, and entrench the training gains made thus far:

Earlier this year, New Zealand declined an invitation to participate in this NATO Mission Iraq programme. Supposedly, the aim of our military contribution has been to create the conditions for security in Iraq. Yes, the defeat of ISIS on the battlefield has certainly helped in that goal. However, the US sanctions against Iran are now undermining the economic security of Iraqis, and negating the military gains.

How come? Well, under Saddam Hussein’s minority Sunni rule, Iranians could not visit the holy places in Iraq, such as Najaf. But after his overthrow created a Shia majority government in Iraq, their fellow Shia pilgrims from Iran poured in as tourists, boosting the local economy. That influx has now been cut off at the knees by the US sanctions against Iran, and those sanctions also endanger the supply of Iranian electricity and other goods and services on which Iraqi cities have come to depend. As the German media has been reporting:

For Najaf, the [overthrow of Saddam] was enormous. From a desperately poor town with some 50 hotels to cater for very restricted religious tourism, it developed into a city with high-rise buildings, shops, hotels and restaurants catering to a huge volume of tourists. Nonetheless, the community soup kitchens were still needed at times to help feed all the pilgrims. Now they mainly feed the many Iraqi victims of the US embargo on Iran….Sixteen years after Saddam’s fall, Iraq still cannot produce enough energy to cover its needs and is dependent on gas and electricity imports from Iran. And while Washington is allowing these to continue, for the time being at least, this concession is due to end this month….

In addition to gas and electricity, [Iran] also exports food staples, fruit and vegetables to Iraq, which the south of the country is now dependent on….that dependency is most visible in Najaf, where Trump’s name is on everybody’s lips as the root cause of all their troubles. “The Americans aren’t only punishing Iran, they’re punishing Iraq, too, because we are losing customers and money,” says Said Ali Mossawi, a co-owner of a Najaf restaurant that usually caters to tourist groups. Like they have been for months, the rows of tables are empty this lunch time. Mossawi says he has lost over half his customers and has had to sack about 40% of his staff.

These are the resentments that ISIS will now be drawing upon, as it rebuilds from being a battlefield presence, into an insurgent force. Thanks to the US obsession with Iran – and Trump’s uncritical embrace of Saudi Arabia’s hostility to Iran – any small gains made by our military contribution to improving the “security” of Iraqis is being systematically undermined.

We are also leaving Iraq without engaging in the task of reconstruction, daunting as that is. (Instead, we will be writing the Iraqis an annual cheque of $3 million towards a reconstruction effort estimated to cost $87 billion, and wishing them the best of luck.) Other countries are engaging with the tasks required. Only a month ago, Brigadier –General Colin Keiver, the outgoing Canadian military commander in Iraq, stressed the need for an ongoing military presence in Iraq, in tandem with reconstruction efforts to rebuild the war-damaged regions and to bridge the country’s bitter sectarian divides.

Over the long term, Keiver said, defeating ISIS once and for all will involve some form of reconciliation between Shia and Sunni Muslims in Iraq, in tandem with reconstruction and the restoration of basic services, starting with water and electricity. “We see local community leaders … mayors or whoever, stepping up and leading and bringing people together to solve issues at the local level. It’s not happening as quickly at the national level,” Keiver said from Kuwait, where the Canadian mission headquarters has been based since 2014. [A year after national elections, Iraq still has no defence minister or interior minister.]

On Tuesday, the U.S.-led coalition overseeing the campaign against ISIS said it backed up Iraqi counterterrorism teams in an assault last week on extremist “sleeper cells” in the mountainous Wadi Ashai area in northern Iraq. Keiver said ISIS is trying hard to regroup. “They are still very much trying to be an insurgency in both Iraq and northeast Syria,” he said. “For example, we see them trying to move men and equipment along the rivers in Iraq. They’re occupying the mountainous areas in the desert.”

The point being – New Zealand’s original commitment of forces to Iraq was arbitrary, and had no end game or tangible victory in mind. Now, New Zealand is pulling its troops out of Iraq just as arbitrarily, having achieved gains of dubious sustainability. Regardless, we are patting ourselves on the back for our achievements in Iraq – just as we praised the (equally transitory) work done by our PRT teams in Afghanistan.

Even if the real rationale for our involvement was to win a few brownie points with our allies, how on earth do MFAT and NZDF think that our withdrawal announcement is going to be received in Washington and Canberra? Better not to have been involved at all (surely) than to cut and run, even as the lunatic US policy towards Iran unravels any minimal gains we may have made in Iraq.

The timing of this morning’s mega-spending on Defence makes yesterday’s reduced Iraqi/Afghanistan roles look like the Greens have been fobbed off, once again. The Greens have been claiming victory for the Iraqi withdrawal. Yes indeed, it has won an end point for our 100 or so troops, and has also ensured that three (count ‘em, three!) troops will be engaged in improving the status of women in Afghanistan, and other peaceful endeavours.

At the same time, Defence Minister and New Zealand First MP Ron Mark has just announced the Defence Capability Plan 2019 which cements in place the massive $20 billion programme of Defence spending out until 2030, including the billion dollar plus cost of replacing the Hercules cargo planes with their Super Hercules successors. It is not simply that these huge amounts make the teachers’ demands look like a pittance, though that is bad enough. What is doubly absurd is that this latest round of Defence purchases is our membership fee for defence alliances that were conceived way back during the Cold War era of the 1950s, some 70 years ago. The force configurations and related projections of military power belong to a bygone era, and the steeply mounting cost of the hardware can no longer be justified by any realistic threat scenarios in the Pacific, or the South China Sea.

The only conceivable “enemy” to justify these expenditures is China. Are we really planning for war with our main trading partner? Contrast this lavish Defence spend-up with the treatment of Pharmac. The public is constantly being told that – modern biologic medicines being as pricey as they are – we can’t expect the best treatments for every condition, and we therefore have to ration and prioritise the supply. This same logic doesn’t seem to apply to Defence, which is getting four surveillance Poseidons at an all up cost in the vicinity of $3 billion. Meaning: each one of those four aircraft will eventually cost about as much as the entire settlement package being proposed for the teachers. Go figure.

Here’s old Bob Seger with an apt song for the Greens’ participation in the decisions being made by this coalition government. Try and keep control when you’re being cut off at the knees… yep, that sounds about right.