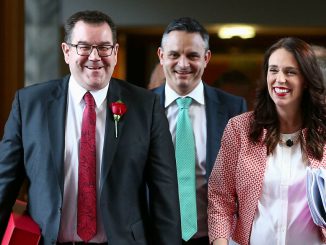 Supposedly, political parties live and die by their success in cultivating the middle ground. This is where crucial numbers of rational, well informed voters are believed to congregate, waiting to embrace messages of restraint and moderation, provided there’s a little bit on the side for them, too. This ‘myth of the political centre’ is a shared belief among politicians and journalists alike. (It dovetails nicely with journalism’s ‘myth of objectivity’, which promotes a similarly ideal fiction of even-handed moderation in all things.)

The belief that political success hinges on cultivating the moderate centre is convenient. It reduces the chaos of political diversity to one spectrum stretching from the extreme left to the extreme right, with sense and moderation allegedly clustered around the middle. Less obviously, it herds voter options onto a middle ground that’s been prepared for them by the two major parties, who generally share a similar ideology about how wealth is generated in a modern economy. (Ultimately, the main differences between National and Labour have to do with how wealth should be distributed – tax cuts or social spending? – rather than on how the free market should operate.)

What I’m getting at is that not only is the notion of a crucial “political centre” an ideological construct, but the belief that it is the moderate middle who will decide the outcome of Election 2020 is itself a deeply ideological stance. Instead of being a check and balance on excess, the political centre is more often being carted along by the prevailing economic orthodoxy. On that score, there is research evidence that left wing beliefs declined among the British public after the election of Tony Blair, and not before it. That may explain why when Margaret Thatcher was asked to nominate her greatest achievement in politics she reportedly replied: “New Labour”.

Meaning: when Thatcher saw that Tony Blair was maintaining her economic policies and was only softening their impact around the edges, Thatcher finally knew that she had succeeded in shifted the centre of political gravity. In New Zealand, we are still living with the consequences of the normalisation of our own version of Thatcherite extremism.

It is easy to point to examples of the internalisation what is now taken to be moderate and normal. In the wake of last week’s Budget for instance, some critics felt the Budget hadn’t pursued “well-being” far enough and hard enough… Yet interestingly, all of those critics (myself included) homed in on the same alleged failure of nerve. Namely, that Finance Minister Grant Robertson hadn’t taken advantage of (a) New Zealand’s remarkably low ratio of government debt to GDP and (b) globally low interest rates in order to (c) borrow more, and thereby provide the coalition government with sufficient funds to mount a full-blooded response to child poverty – and to launch the job-creating infrastructural projects that might help communities to heal themselves from the damage done to them by free market fundamentalism.

That didn’t happen. With one trifling exception – creating a 15–25% range of government spending to GDP rather than having a fixed 20% target – Robertson has also chosen to remain for the foreseeable within the straightjacket of the Budget Responsibility Rules. Yet significantly, none of the critics mentioned the other option, whereby the government could have given itself some fiscal head-room by raising the taxes on high income earners… either directly, or by altering the tax brackets that treat people on $70,005 the same as people earning $500,000. True, Robertson did make a big deal about helping the poor by indexing their benefits to average wage increases. But why didn’t he exempt those on low incomes from tax altogether and/or raise the benefit levels? Answer: because that would have been the old normal, and it is now deemed to be politically out of bounds.

Possibly, there’s an outside chance that Robertson may be saving any changes to the tax framework for next year, when such rewards to low and middle income voters would be felt closer to Election Day 2020. For now though, it seems significant that the “Well-Being” Budget” had no place for the progressive taxation that used to be the cornerstone of the social contract in this country. It would be nice to think that it is only the presence of New Zealand First that is stopping the Labour/Greens bloc from shifting economic policy back from the demands of market extremism.

Unfortunately though, there’s no evidence that Labour 2019 has changed its spots from the economically conservative positions it pursued under the Clark government. (One of the reasons we have such low government debt to GDP ratios is that the Clark government restrained its social spending in areas such as Vote Health, and paid off debt instead. Not all of New Zealand’s current social deficits are due to National’s years of neglect.)

Then as now, Labour appears to regard market efficiencies and social justice as being compatible, and that – for example – child poverty can be fixed by using the proceeds from the same market forces that continue to generate it. This stance is now applauded as “moderation” and “pragmatism”. If politics is the art of the possible, then it’s equally true that the boundaries of the possible have shrunk considerably.

In the real world, elections are not decided by parties carefully tailoring their policy positions to satisfy the median voter who has equal numbers of people arrayed to their left, and to their right. In the age of Trump and Brexit it is very clear that voters are not being driven by rational contemplation of all the relevant information to which they enjoy full and unfiltered access. Nor do their views fall along one spectrum, from left to right. As those early years in office of Tony Blair proved, politicians more often define the political centre, and spend a lot of effort and money in carting voters along with them as they do so.

Certainly, National’s leader Simon Bridges seems aware of the risk that a popular leader like Jacinda Ardern could shift the paradigm. That’s one reason why his attack lines have not been much about policy differences. (National’s cupboard of new policies is utterly bare.) Instead, the attacks have focussed on undermining public confidence in whether the Ardern government can be trusted to mind the store. Thus, we’ve had a litany of allegations about “bungling” and “incompetence”.

By doing so, National is fostering a climate of risk aversion among a Labour leadership that is already risk-averse, and rather fearful of the political implications of promoting Labour’s values and traditions. Progressive taxation? Concessions to beneficiaries? Risky stuff, requiring intense micro-management. In sum, Labour is being made to feel gunshy about using its greatest political asset – Ardern herself – to define what a new political centre might look like.

Footnote. Many people expect that a Labour-led government should be behaving more like a left wing government. Yet even if it wanted to – which is debatable – it can’t do so unilaterally. Obviously, the coalition contains New Zealand First, which has a track record of triggering the nuclear option and destroying governments when it doesn’t get its own way. Future historians will be fascinated to learn more about how the “negotiations” over policy options were conducted within this coalition. (Chances are, it will look more like stagecoach robbery. Hand over that strongbox and spend the contents on Defence, or else.)

On economic policy though, Labour’s economic conservatives are probably somewhat to the right of NZF, which has never felt any affection for neo-liberalism. On that score, Labour’s overt expressions of compassion for the poor and needy provide essential cover for the fact that its economic policy is well to the right of what its supporters believe and want. Amusingly, the NZF-led funding infusions for Kiwirail and the Provincial Growth Fund are probably more in tune with how most Labour supporters think the economy should be being run.

Verdigrls are a NYC trio comprised of the Wolk sisters and their friend Rachel, and this track “Women is Fiction” is from their recent Small Moves EP..The lyrics have to do with the damage done by idealised depictions of women in popular art and literature, yet the whole track is distanced by the coolly restrained synth lines and vocals. This is pretty music, but tough on the inside.

Talking of tough grl trios, Sleater-Kinney have just emerged from sessions for a new album produced by St Vincent (who has given Janet Weiss the drum sound she’s always deserved) with this single “Hurry On Home”. The self-deprecating lyrics are amusingly OTT: “You know I’m dress down-able, uptown-able, hair grab-able, grand slam-able…” Carrie Brownstein further declares herself to be “unfuckable, unlovable, unlistenable, unwatchable”. But hey, just hurry on home regardless, and “disconnect me” from my bones and skin, because that’s just what we do…