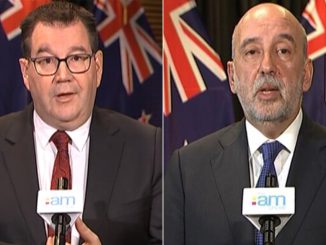 Desperate times result in desperate measures. Over the course of the final 72 hours before the Wellbeing Budget went public, the over-riding goal appears to have been to prevent as much of its contents from being leaked prematurely as possible, in a context where the authorities still seemed uncertain as to how much Budget information National had actually obtained. In what looks now like a bad cop/good cop routine, Treasury tried to scare off the leakers by calling in the Police to investigate what Treasury boss Gabriel Mahklouf depicted as a remorseless ‘hacking’ attack that had finally breached its defences, while – simultaneously – good cop Robertson wrote nicely to National to urge them not to release more of this stuff before Budget day. You know, in the national interest.

Well… it’s now evident that this scenario of Treasury being victimised by demon hackers was still being allowed to be peddled in public, even after the Police and the spy agencies had told Treasury – and it transpires, Security Services Minister Andrew Little – that no such hack had occurred. Finance Minister Grant Robertson would also have been told, virtually simultaneously. This would be by mid-evening Tuesday, of Budget week.

At that point, it should have been obvious that if a mere “search” function on the Treasury website could have delivered the leaked material, then such content would have been limited solely to the pre-loaded content only, and this – in turn – should have re-assured the government that National had played all of its cards, and no further revelations were likely.

The fact that the Defence spending for instance, was solely for a one year allocation, and not the usual four year amount, should have re-assured Treasury/Robertson along those lines. Moreover, early on the Wednesday, the sole focus of National leader Simon Bridges on the “bungling” and incompetence” aspects (while not giving further revelations about Budget content) should have galvanized Robertson to go on the front foot and (a) publically clarify the likely nature of the leak (b) re-assure the public of its limited nature and thereby (c) begin to distance the government from Treasury’s overcooked initial “explanation” as to what had happened. As we now know, Robertson did none of the above. As a result, the government now remains ensnared with Treasury’s mishandling of its information.

To repeat: the fact that the information released by Bridges had been only the pre-announced stuff – which was why it had been pre-loaded on the website, awaiting the full inputs on Budget Day itself – should have immediately told those concerned what they were (almost certainly) dealing with. One can see why Ireland – which has just hired Mahklouf to run its central bank – might be worried about how the Irish economy will now fare, amidst the wild winds of global commerce. Cool heads are needed in making the decisions entrusted to central bankers. This time, Treasury evidently panicked.

Footnote One: Treasury is now facing two separate inquiries in the wake of those Budget leaks. One inquiry will be into its security procedures, and the other into the public statements and advice given to Ministers. (It is unclear whether the adequacy of the ministerial responses will be part of the brief, but at the very least the exact timetable of the communications behind the public responses will be established.) To take just one example… the analogy that Mahklouf gave the public (via the state broadcaster RNZ) of a metal bolt finally yielding to repeated attacks seems to have been particularly wide of the mark.

To repeat: rather than assessing rationally how much the ‘hackers’ knew and how they could have known it, Treasury appears to have done what ordinary folk at their wit’s end in the big city might do ie, it asked a police officer for help. That’s not a good look, especially since the Police verdict (that no hack had occurred) was simply ignored and kept under wraps.

Lest we forget, Treasury is the agency that holds other government departments and agencies entities to account, for their efficiency and performance. Hopefully, those two SSC inquiries will keep that role in mind, and hold Treasury to a higher standard.

Footnote Two: As the old saying goes, prevention is better than cure. Yet as Andrew Little explained to RNZ last week, adopting counter-terrorism measures only after the fact is more the New Zealand style: “We like to think we have… the ability to respond to something. But we don’t have a strategy that anticipates and prevents or seeks prevention of a terrorist act happening.”

Moreover, as RNZ’s Insight programme indicated yesterday, that approach is not globally the norm, and nor is it inevitable:

According to research by former army officers Chris Rothery and Terry Johanson, both now academics at Massey University, New Zealand’s entire national security system is “reactionary”, and does not focus on anticipating and preventing terrorist activity. ….

The pair said New Zealand has no national security strategy, no counter-terrorism national strategy and – unlike in Australia, Canada and the United Kingdom – no independent body to check threats are being prioritised properly.

That’s a pretty astonishing situation, given the hundreds of millions of dollars that taxpayers have poured into our spy agencies in recent years. If Little and the two Massey researchers are right – ie if the spy agencies are mainly re-active, and this country has no strategy for identifying and prioritising imminent threats to public safety – then surely a solid argument exists for scrapping the SIS entirely, and handing over to the Police the job of detecting terrorist conspiracies, and catching the criminals involved. Why pay for a defensive shield, if it is unable to function as one?

Unfortunately, Little’s concession shouldn’t come as that big a surprise. Over the past decade, the SIS annual reports reveal an agency fixated on the rear view mirror and on the threat allegedly posed by Islamic extremism, rather than on the white nationalists responsible for the mosque attacks. In the wake of the Royal Commission findings on the Christchurch attacks, Little has suggested, that situation will probably change.

If so, privacy safeguards will need to be built in, and observed. Arguably, the only thing worse than a spy agency bereft of a pro-active plan would be the same agency brushing aside privacy concerns while it zealously pursues the security threats suspected of hiding under every bed. For some unknown reason, the Goldilocks balance – neither too much nor too little security – continues to systematically elude us.

Talking of ordinary folk, the US folk musician Jake Xerxes Fussell has just released his third album, which – among other things – contains his version of the old Jean Ritchie square dance song “Swing and Turn Jubilee”. Despite all of Fussell’s fine qualities, his stolid remake comes nowhere near Carolyn Hester’s manic version from the early 1960s, which featured one of Bob Dylan’s first recorded appearances, and also had Bill Lee, Spike Lee’s father, on bass. Here’s Carolyn Hester, operating at full throttle:

And here’s June Ritchie, at her Appalachian finest:

Finally, here’s Jake Xerxes Fussell himself with his beatifically optimistic “Raggy Levy” song. If only mornings could always feel like this: