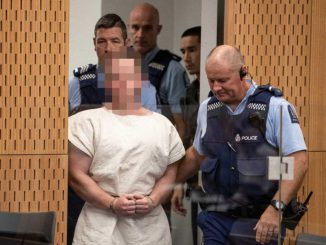 It hasn’t been banner news anywhere except in Britain’s Guardian newspaper… but reportedly, the main news outlets in New Zealand have jointly agreed to limit their coverage of the upcoming trial of the Christchurch shooter, apparently in order to prevent him from turning the trial into a platform for disseminating his white supremacist beliefs:

…..A copy of the agreement, signed by the heads of RNZ, TVNZ, Mediaworks, NZME and Stuff, says they fear the accused could use his trial “as a platform to amplify white supremacist and/or terrorist views or ideology”, and preventative action needed to be taken to limit his audience and exposure.

Here’s the gist of how this “preventative action” is to be managed:

The pledges in the agreement include only assigning senior journalists to cover the trial, limiting the coverage of statements that “actively champion” white supremacist or terrorist ideals, not quoting from the accused’s manifesto, and not broadcasting or publishing “imagery, symbols or signals” from the accused that reference white supremacist ideology, including hand signals such as the Nazi salute.

On the surface, this proposal is consistent with parallel moves being undertaken by the Ardern government, to prevent Facebook (and other social media platforms) from being used to disseminate hate speech and violent white nationalist ideology. It is possible to support those moves, while still feeling misgivings about the media self-censoring process that’s being envisaged here. For good reason, we want to retain a system of open justice in this country. In the courtroom, that principle will presumably still apply, assuming that no classified – or commercially sensitive – information is to be brought to bear.

However, as the news outlets say in their signed statement about the trial coverage: “we are also mindful of our role as the ‘eyes and ears of the public’ in the context of court reporting”. Yet by agreeing beforehand among themselves to edit/censor the defendant’s statements, it is hard to see how that role can be carried out by these news organisations in an even-handed fashion. Plainly it won’t be, not in this case.

True, not many members of the public will feel much sympathy for this denial of a platform to the shooter. But that only fuels the suspicion that this censorship process is being driven by a desire to curry favour with the audience, rather than by any overwhelming desire to serve and protect the social good. By censoring the shooter, these news outlets will be limiting the potential backlash from people offended and outraged by hearing very much of his rationale.

The censoring process will have only limited application. Social media and smaller news platforms – eg Spinoff, Scoop – will not be bound by the agreement unless they sign on to it. Obviously, international news outlets will not be bound by it at all. That raises the prospect that foreigners will be more privy to the full content of this exercise in New Zealand courtroom justice than New Zealanders themselves will be.

Sure, it’s a difficult call. One can have mixed feelings about this kind of agreement, at least as it applies to the Christchurch shooter. It is easy to sympathise with the intention, but just as easy to feel queasy about news outlets agreeing to censor their reporting of court proceedings, on overtly political grounds. In that respect, the broad scope and some of the wording in the agreement seem unfortunate eg:

“…limiting the coverage of statements that “actively champion” white supremacist or terrorist ideals, not quoting from the accused’s manifesto…

Limiting the coverage of statements that champion ‘terrorist’ ideals? Notoriously, one person’s terrorist is another person’s freedom fighter. Under an agreement such as this, Nelson Mandela’s terrorism trial would have allowed only limited coverage of his rationale, or of his related writings that grudgingly advocated violence. Obviously, I’m not likening the Christchurch shooter to Mandela, but merely highlighting the risk of putting journalists in the role of censoring what the public can be allowed to learn about how defendants in a criminal trial choose to rationalise their actions.

After all… journalists routinely serve as megaphones for the lies and distortions that politicians peddle on a daily basis for personal and party gain. US President Donald Trump for instance, has reportedly uttered 10,000 lies and wilfully misleading statements over the course of his presidency thus far, with most of them being passed on to the public relatively unfiltered by the media. Routinely, the media sees virtue in merely reporting – and not pre-emptively evaluating – the often outrageous statements made by politicians. Evidently, the media assumes the public has the ability to discern truth amid this welter of information.

Why then, are our main media organisations suddenly feeling impelled to evaluate and filter these particular criminal proceedings? Since the defendant’s liberty is at stake, surely his rationale for his actions – however repulsive that rationale may be – should be comprehensively reported. That’s what the media in Norway chose to do in their coverage of the trial of the neo-Nazi mass murderer, Anders Brievik.

Yes, there is a risk that Brenton Tarrant may prove to be a far more eloquent advocate for white supremacy than Brievik proved to be. Full exposure only made Brievik seem pathetic, and deluded. Why do we fear that the overall outcome with Tarrant would be any different? If the public cannot be trusted to hear – and reject – his abhorrent views, we could be in worse shape than we realise. Point being… in the reporting of criminal trials, journalists should not be volunteering to be the censors of political content.

Its been about 30 years since Bruce Springsteen issued any new music comparable to his glory days, and so there’s a risk his new single “ Hello Sunshine” will be over-rated by the faithful. Since the late 1980s though, one barrier for non-believers has been his way of singing: that Bruce Bellow tends to be an acquired taste that not many post-boomers have ever felt like cultivating.

The good news is that “Hello Sunshine” forgoes the bellow in favour of a more intimate style of delivery, and it works really well… even though some listeners may pine for an anthemic Bruce chorus that never arrives. Thankfully IMO, this track sounds more like a mournfully reflective Townes Van Zandt road song than a stadium epic…

And while we’re doing mournfully reflective road-as-life metaphor songs, here’s the National‘s new single “Hairpin Turns” from this month’s I Am Easy To Find album.