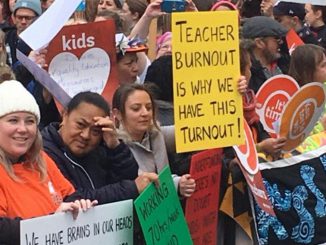 Currently, the education sector looks like one of those games of American football where its hard to keep your eye on where the ball is, and where ministerial quarterback Chris Hipkins is trying to throw it. Neither side seems to have much of a plan for advancing to the end zone. Somehow, a dispute that supposedly isn’t about the money requires more money to break the impasse.

As we all know, on May 29 – the day before the Budget – both the PPTA secondary teachers union and the NZEI primary teachers union will be on strike. The strike action comes in the wake of nearly a year’s failed negotiations, and the rejection of several previous pay offers. At this point, the government’s education pay offer reportedly amounts (in total) to circa $1.2 billion spread over four years. This is comprised of a $698 million pay improvement package for primary teachers and principals, and a $500m package for secondary teachers. Since taking office, the coalition government has also provided more funding for learning support (ie special needs and learning support co-ordinators) scrapped charter schools and national standards, and carried out a review of Tomorrow’s Schools.

NCEA has also been reviewed. Yesterday, the government announced it would be assisting 145,000 families by scrapping the $76.70 fee for the examination, which has also been streamlined in ways that seem likely to reduce teacher assessment workloads.

In the upcoming Budget, there will be a $95 million package spread over four years to fund an extra 3,280 teachers over that period, and which will be allocated as follows:

[The package] also supports 800 more beginning teachers into their first roles through the National Beginning Teacher Grant and the Voluntary Bonding Scheme expansion.

Now… as PPTA president Jack Boyle says, this Budget package is really just a ‘band-aid’ that will barely cover the projected growth in student numbers and the rate of teachers leaving the profession. As Boyle puts it:

The reason there are teacher shortages are threefold: the salary isn’t competitive with other careers, teacher workload is unreasonably high and the attrition rate for newly graduated teachers is nearing the 50 percent mark within 5 years. The 3280 teachers promised by the government will mostly be needed to replace departing teachers and to cope with roll growth.

According to the PPTA, the government’s numbers are based on Ministry of Education modelling that “massively” underestimates the scale of the shortages. “Saying you’ll magic up a couple of thousand more teachers,” Boyle concludes,” without addressing the underlying reasons why there’s a teacher shortage in the first place, is counter-productive.”

Maybe so. Yet it is equally magical thinking to expect an overnight fix for the ‘underlying reasons’ for teacher shortages. Any one of the measures outlined above – including the pay offer on the table – would have been regarded as major victories if they’d been won under the previous administration. Unfortunately, the entire country is still in catch-up mode. New Zealand has just emerged from a nine year ideologically-driven neglect of public health and state education under National, who (incredibly) have been trying to paint themselves this week as the champions of higher teacher pay.

The upshot is that many sectors, including mental health, are now seeking to recover from those nine years of inadequate funding. Currently, the public are still generally onside with the efforts to make up lost ground. Last year for example, the nurses’ fight for better pay and conditions drew on a deep well of public gratitude for the courageous and determined way that nurses had kept an essential public service afloat, while National was systematically starving it of funds. Even so, the nurses could not (and did not) take that enduring public support for granted. All along, better pay rates were a key part of that equation – yet the nurses were always at pains to stress they were fighting for patient safety, standards of care, and nursing recruitment and retention.

In identical fashion, teachers have earned the public sympathy and support they currently enjoy. They too, are stressing that recruitment and retention – and related workloads – must be dealt with adequately in any resolution of the current crisis that the profession faces. The teacher unions have also been right to point out that the government and the Education bureaucrats have both been over-stating the generosity of the current package for new teachers. Yet the more this fight is framed in terms of money – without clarity on the transformative educational goals the extra money would deliver beyond what’s already on the table – then public support may well begin to erode. The PPTA has been talking of five more weeks of possible industrial action beyond May 29.

The timing of the upcoming strike seems odd. This major strike will be held the day before the Budget eclipses all other news coverage for much of the succeeding week, and this Budget in particular will be a showcase for the government’s claim that it is addressing the needs of social wellbeing. By taking the fight all the way to the Budget gates, the teacher unions will have shown their membership that they’ve gone the distance. Subsequently though, the climate will be even tougher for the end game, of the coming back and demanding more.

That trade “war” with China

Some Trump apologists (such as Arkansas senator Tom Cotten) are taking the trade war metaphor literally. On CBS yesterday, Cotton told US farmers suffering from China’s tit-for-tat targeted tariffs that hey, stop complaining and just be grateful that you’re not dead:

There will be some sacrifice on the part of Americans, I grant you that. But also that sacrifice is pretty minimal compared to the sacrifices that our soldiers make overseas that are fallen heroes or laid to rest…”

In similar vein, even Mothers Day last Sunday was militarised by the Trump White House:

“I want to express our incredible appreciation to all of you. The moms serving our Nation in uniform, the mothers of our great heroes, and the moms with spouses who serve in the armed forces: your unwavering dedication and support strengthens our entire Nation.”

Somehow, Trump managed to tweet-storm his way through Mothers Day without mentioning Melania, the mother of three of their five children. As almost the entire Internet noted, this was in stark contrast with the message from Barack Obama.

Meanwhile, on the front lines of what could easily turn into a real shooting war between the US and Iran, things are going from bad to worse. Supposedly, two or three oil tankers have been damaged while sailing near the Strait of Hormuz. Iran denies responsiblity. The accusations of tanker ‘sabotage’ are being made by those ever-reliable Saudi and UAE governments.

This alleged escalation in the Strait of Hormuz comes right after the US had shifted bombers and an aircraft carrier into the region after claiming there were “clear indications” Iran or its proxies were about to attack US forces in the region.

Those with long memories will recall the Tonkin Gulf incident, a trivial skirmish between a couple of US destroyers and three North Vietnamese torpedo boats that the US amped up into a justification for vastly expanding the Vietnam war.

In response, President Johnson ordered air strikes against North Vietnamese boat bases and an oil storage depot. “Aggression by terror against the peaceful villagers of South Vietnam has now been joined by open aggression on the high seas against the United States of America,” he said that evening in a televised address. He also requested a congressional resolution, known as the Gulf of Tonkin Resolution, which on August 7 passed unanimously in the House and with only two dissenting votes in the Senate, essentially giving him the power to wage war in Southeast Asia as he saw fit.

Because the Tonkin Gulf was later seen to have been a bogus pretext, Congress later imposed restrictions (via the 1973 War Powers Act) on the unfettered presidential power to wage war. Thanks to the conflict the Trump administration is deliberately stoking with Iran, that balance of powers may soon be tested again. After all, the waging of a war with Iran (that Congressional Democrats and the Europeans would certainly oppose) could be Trump’s best re-election strategy for next year.

From the education front lines to the Strait of Hormuz, there’s a ton of self-justification in the air. Here’s the Mills Brothers with an engaging 1944 anthem for the self-satisfied:

There’s a modern version of that same Mills Brothers song online, by the trio called Mountain Man. All of Mountain Man showed up for this great live version of “Die Young” by Amelia Meath’s other group, Sylvan Esso:

And from a couple of weeks ago, here’s another Mountain Man member – namely, Alexandra Sauser-Monnig – who is now recording under the name of Daughter of Swords, with a lovely, ethereal track called “Dawnbreaker”…