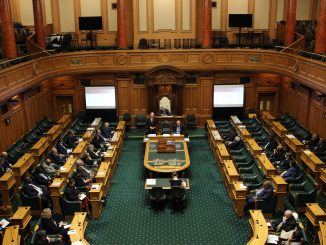 It would be nice to think Parliament was a forum where rationality ruled – and where policies are raised and evaluated in terms of their contribution to the greater good. Obviously, it isn’t like that. Long ago, politics was defined as a blood sport, and many MPs feel pretty chuffed about their take-no-prisoners approach to the business of the House. As a result, most days in the debating chamber look like a verbal version of Mixed Martial Arts – where the aim is to damage one’s political opponents by any means available, while protecting one’s own vital parts as best one can. Verbal violence, rank gossip and strategic leaks of information are all seen as valid weapons in the arsenal of one-upmanship.

Given those noxious aims and means, it shouldn’t be all that surprising that the working environment of Parliament is so poisonous. Each of the parties locked in combat contain members who are jostling within their own ranks for power and influence – and these festering rivalries get readily displaced onto the (disposable) staff who occupy the bottom rungs of the hierarchies of power. Insane deadlines, stress and abuse are common by-products. The general public also regularly contributes to the problem. Since the public expect better from their elected representatives, they often vent their anger and disappointment onto any parliamentary and electorate staffers who stray within reach.

As long as this adversarial climate exists, any reform of the working practices around Parliament will be only palliative, at best. That said, the report by Debbie Francis into Parliament’s working conditions is an astute, very readable diagnosis of its failings – and if picked up and enacted, her raft of over 80 recommendations would eventually make Parliament a better and safer place to work. Because so many for the problems are interconnected, she’s right to urge people to read the entire report, which is available here.

IMO, one of the most interesting passages in the report is the section describing how complainants have felt treated by an HR section that has seemed ill-equipped and/or unwilling to handle their complaints adequately. Often, the HR default setting when faced with examples of bullying and harassment has been to shame and blame the victim by suggesting that perhaps they weren’t personally “suited” to demands of the Parliamentary environment, and should thus take the option of triggering the “breakdown clause” in their fixed-term contracts, and resign.

In Parliament as elsewhere, HR departments often seem to be functioning mainly as an instrument for making the existing hierarchy run smoothly. They are not a reliable trustworthy means of challenging the excesses of those sitting on top of the power pyramid. Around Parliament, the problem of effective remedial action is compounded by the fact that some of the abusers have been democratically elected. Far easier then to define the accuser as the problem that needs fixing.

Francis doesn’t shy away from this issue. She makes several recommendations intended to consolidate parliamentary HR, upskill it, and ensure it functions as a genuine mediation point – especially between the MPs/Ministers on one hand, and parliamentary staff on the other. To that end, she is critical of the prevailing “triangular” model whereby (a) Parliamentary Services/DIA (b) MPs/Members and (c) staff are largely treated as separate entities, despite a reality in which the staff are in no doubt that their actual “employers” and determinants of workplace culture are really the MPs and the Ministers.

Therefore, several of Francis’ key recommendations have to do with creating a unitary structure within Parliament for handling its workplace operations, improving its managerial expertise and genuinely mediating the disputes that do arise. The report urges that incoming MPs and new Ministers be given appropriate training in modern workplace practices, and that appropriate expert counselling should be made readily available at short notice, for complainants.

As indicated, Parliament will always be a stressful environment. Nor are many of its problems unique. In the private sector and elsewhere in the public service, inequalities of power and adversarial cultures often produce similarly toxic outcomes for the people who have to work in such conditions. Even so, Parliament needn’t be such an unsafe workplace as it is at present, where victims of bullying and harassment are routinely blamed for their situation, get intimidated into silence and/or get shown the exit door. As Francis says (p 74) “Parliament should surely model modern, caring and flexible employment practices, rather being the only workplace in the country where employees perceive – rightly or wrongly – that they can be fired at will.”

Ultimately, It would be nice to think that the Francis report gets taken as a blueprint for protecting employees from the other bullies and predators currently active in this country’s workforce, in and beyond the confines of Parliament.

National needs MMP allies, and it has a track record of trying to spawn them, not always successfully. The Act franchise has outlived any useful purpose though, and that blue/green franchise never looked like being a goer. So… its not all that surprising that National strategists have finally eyed the Christian right (often hovering just below the 5% MMP threshold) as a more promising investment, and one that it can grow from within its own ranks.

And lo, cometh the man: National MP Alfred Ngaro is reportedly shaping up to found and lead a Christian right towards the Promised Land of parliamentary representation, via an anti-abortion platform that’s primed to resonate within a conservative Pasifika (and Maori) church-going bloc otherwise likely to vote Labour. As a sitting MP, Ngaro can also use Parliament as his megaphone for rallying the faithful.

While abortion is always a conscience vote in the House, it has been the Labour/Green side of the current coalition government that is planning to decriminalise abortion by removing it from its out-dated status within the Crimes Act, and treating it in future as a women’s health issue. Ngaro and his allies are treating this paper re-definition as a godless massacre of the innocent. A “holocaust” no less.

The mere tweaking of the legal status that abortion has under statute is of course, the route of timidity that the Ardern government has chosen instead of reforming the 1977 Act to make abortion solely a decision between a woman and her doctor. Regardless, National seems interested in grooming a proxy party likely to make abortion an election issue next year presumably by painting the Ardern government as godless baby-killers. Paradoxically, by entertaining such a prospect National would also be underlining just why genuine reform to protect abortion rights is essential.

How so? Because as many observers have previously noted, the current 1977 abortion and contraception statute is a conservative law that has hitherto been liberally interpreted – and obviously, a future National/Christian coalition government might well forbid it from continuing to be interpreted so liberally. (The threat to the mother’s health could be required to be vetted more rigorously. In that respect, New Zealand may not always be as distant from Alabama as we’d like to think.) If National truly is embarked on a MMP relationship with the Christian right, then the response in urban seats, and among women/young voters would have to be that – unlike Bill English, who didn’t try to impose his personal views on abortion upon everyone else – Simon Bridges and the party he leads would be willing to contemplate doing so. Alfred Ngaro has a big decision to make.

Earlier this seek, this column showcased r & b singer/writer Jamila Woods and her great new album Legacy! Legacy! that celebrates her culture heroes in non-obvious ways. For instance, to fully get the gist of the “Frida” song, you need to know the separate housing arrangements Kahlo and Diego Rivera had, and the bridge between them. Well, here she is again with a live version of her song “Holy” – which uses religious language to suggest that a reverence for one’s self should be the starting point for any viable notion of what is transcendent in life…