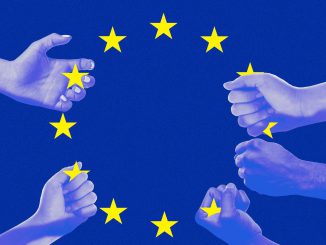 The victories for the far right came in its existing strongholds (Hungary, Italy) in a Britain uniquely obsessed with Brexit, or in countries (eg France) where the likes of Marine Le Pen chose to run solely as an alternative to the country’s vastly unpopular President, Emmanuel Macron.

Even then, Le Pen ended up barely one percentage point ahead of Macron after a campaign she devoted almost entirely to anti-Macron messaging. It should be kept in mind that Le Pen also did very well in the last European parliamentary elections too, before losing heavily in subsequent presidential elections. Even now, Macron’s pro-European faction – in unison with its other social democratic allies – will still form the pro-EU majority bloc within the European Parliament, though that bloc will now be pulled leftwards by its need to negotiate with a fresh influx of liberals and Greens. The right wing nationalists meanwhile, are unlikely to be able to function as a coherent bloc.

In Germany, the Greens enjoyed the biggest surge in support.

Commentators are putting it down to the ‘Greta effect’, pointing to the young Swedish climate change activist, Greta Thunberg, who has managed to mobilize people across the world to call out governments on environmental protection issues through Fridays for Future demos.

Plainly, the German far right’s personal attacks on Thunberg only ended up by rebounding on them.

In Britain the big story was the vengeance taken by voters on the two major parties held responsible for the Brexit nightmare. Incredibly, the Tories got pushed right back into fifth place, behind the Greens. Within England, Farage managed to drain conservative voters away from both Labour and the Tories, yet the maths suggest that Britain is still as evenly divided as it was on referendum night in 2016:

The results so far show that the hard Brexit vote totalled 36.8% – with the Brexit party on 33.3% and Ukip on 3.5%. The overall total for pro-leave parties was up at 45.6% including the Conservatives on a historically low 8.8%.

Those numbers are fascinating. They show that the Leave Parties has peaked just below 46%, while the Remain Parties are within striking distance at 41.5% even before any of those 14.6% of Labour votes are counted at all. Since some recent polls have suggested that about 80% of Labour voters support a pro- Remain position (and want Jeremy Corbyn to campaign openly for a second referendum) yesterday’s results should be seen as quite encouraging for the Remain camp.

True, the UK is not a proportional representation system, and those numbers do not reflect what would happen to the tally of seats in a general election. But on the other hand… yesterday’s results show why Labour now needs to abandon its ambiguous position on Brexit, hit the Remain reset button and campaign openly for a second referendum. Yesterday, left wing voters abandoned Labour in droves for the Liberal Democrats, whose “ Bollocks to Brexit” campaign was a smashingly successful model of clarity. (No doubt, the Lib Dems attracted quite a few Tory Remainers as well.)

In Scotland, Labour got wiped out entirely by the SNP, and back in England, the Lib Dems even managed to win Corbyn’s electorate of Islington. Many of the Labour and Tory voters who went over to the Liberal Democrats may never come home again.

If as expected, Boris Johnson becomes the UK’s next PM, British voters will then face a clear choice : Johnson/Farage on one side in England, and Labour/the Lib Dems/the SNP and the rest of Britain on the other side of the fence. No doubt, the next British PM will be highly tempted to call a snap election on Brexit before voters begin to feel its full effects.

Footnote One. Elsewhere in Europe, the centre-left had a good night. In Portugal and Spain, the incumbent governments of the centre-left were rewarded by voters. In Spain, voters rejected the far right populist party Vox, which collapsed back to 6% from the 10% high it achieved only a fortnight ago in the Spanish general elections. On the radical left, Podemos saw its support decline to 10%, a sharp fall from the 18% they’d scored in the last European Parliament elections.

The decline of Podemos holds a cautionary message for the Green Party in New Zealand. Now that Podemos is no longer an outsider party but is actively propping up the Socialist government of Pedro Sanchez, much of its support has been bleeding back to Sanchez and his PSOE party, which has long been Spain’s neo-liberal Third Way party of the centre-left. In a further blow, radical left mayors in major cities (including the high profile administration of Ada Colau in Barcelona) lost their fights for re-election. In Spain as whole, the radical left is being marginalised by regional parties, and by the Establishment left.

Overall, yesterday’s results do not at all support a media narrative that suggests Europe is falling prey to the extremists of the right and the left.

Footnote Two : In a further setback for the right wing extremists of Europe, Austria’s conservative government collapsed yesterday after a corruption scandal that involved the Freedom Party, the far right partner of the country’s young Chancellor, Sebastian Kurz. Apparently, there was a video of the far rightists offering lucrative Austrian contracts in return for Russian money, in an Ibiza hotel room.

In the footage, released by German media, Freedom Party leader and Vice-Chancellor Heinz-Christian Strache can be seen relaxing and drinking for hours at a villa with FPÖ parliament group leader Johann Gudenus, while they meet a woman, purported to be the niece of a Russian oligarch. Mr Strache appears to propose offering her public contracts if she buys a large stake in the Austrian newspaper Kronen Zeitung – and makes it support the Freedom Party.

He is heard suggesting that a number of journalists would have to be “pushed” from the newspaper, and that he wants to “build a media landscape like [Viktor] Orban” – referring to Hungary’s nationalist leader.

Taking bribes in Ibiza? That’s not a good look for the erstwhile champions of the ordinary folk.

Meanwhile, Donald Trump’s attempt to tank the Chinese economy lurches onwards with a $15 billion bailout to US farmers (including to a farm owned by US Republican Senator Chuck Grassley) that are being hurt in the tit for tat tariff wars that Trump initiated. At some point, American voters will hopefully realize that Mexico isn’t paying for the border wall, and China isn’t paying for the trade tariffs. In both cases, Americans are footing the bill.

A report from Tariffs Hurt the Heartland, a bipartisan campaign against the levies, found that increasing duties on [a range of] Chinese goods to 25% would cost a U.S. family of four $767 annually and could lead to a loss of over 934,000 jobs. If the U.S. imposes a 25% tariff on all Chinese imports, … the average family could expect to pay $2,294 more annually for goods…

Until now, the economies of both US and China have benefitted from their interdependence. That point was made a couple of years ago by the Chinese hip hop group the Higher Brothers, and their message is still on target:

Easy to see that Migos has been an influence on these guys. From earlier this year, the Higher Brothers now seem to be grappling with the usual problems of the hip hop high life: