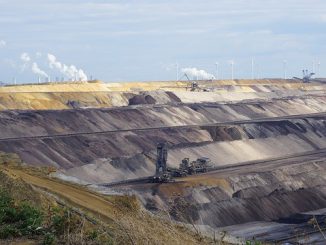 As schoolkids around the world commit today to another round of protest action against climate change, the re-election of (a) the Morrison government in Australia and (b) the Modi government in India have been a kick in the teeth for future generations. Both countries are among the last bastions of support for coal, the classic 19th century fossil fuel. In money terms, Australia is by far the world’s number one exporter of coal.

Moreover, the centre-left’s vocal opposition to the proposed Adani mine in Queensland seems to have caused the collapse of the Labor vote in Queensland that enabled the Morrison government to sweep to victory in that state, thereby sealing Morrison’s victory, nationwide.

That huge Adani mine project near Carmichael in Queensland is a joint Indian/Australian venture, and is entirely consistent with the Modi government’s firm determination to buck the anti-coal trend evident across much of Asia. The region is dis-investing in coal. In Japan, the giant Mitsubishi UFJ Financial Group has ceased financing projects associated with coal.
In Singapore the United Investment Bank has recently become the third Singapore bank in a month to disinvest from coal.

In South Korea, banks are reportedly coming under pressure to do the same, and shun coal.

As mentioned, India is a leading exception to this trend. While India’s private sector has largely withdrawn from financing coal projects, the Modi government has been more than willing to step into the breach. In international forums India will still loudly posture about the virtues of clean energy, but it has been busily providing state backing for dirty coal projects at home. Between 2014 and early 2019, the Modi government opened 52 coal mines across India as part of its push to deliver better electricity supply to rural villages:

This represents an 86% growth over the number of mines added in the previous five-year period, during which time it was harder to get approval for projects. The [Modi] government says structural reforms it has introduced have now made it possible to open a large number of coal mines very quickly. …
The Delhi-based non-profit Centre for Financial Accountability (CFA) has found that the polluting coal industry received thrice as much investment as renewable energy industry in 2017. Most importantly, more than half of that investment came from state-funded banks and financial institutions. Not only existing power plants, but even new coal plants that began last year were funded by government banks.
The short-term fixation on coal embraced by Scott Morrison and Narendra Modi will come together in the re-financing of that Adani mine in Queensland, which had been stalled for lack of funds for the past two years. Given this week’s election results, the Adani mine will now be kickstarted by infusions of funds from state and federal Australian sources, and from Modi’s backing of the Adani Group. The rocky history of the Adani mine project and the environmental damage it will cause were summarised this week in the Sydney Morning Herald

Obviously, this last push by India and Australia to promote coal is very, very bad news for the planet. Even worse, the politics of coal dependence – whereby jobs and community prosperity are seen to be inextricably linked to coal extraction – have plainly not lost their clout with voters. King Coal helped put Morrison back in power, and it just helped to re-elect Modi in a landslide.

Footnote: China’s official policy on the future of coal is unclear. In February, it reportedly impeded coal imports from Australia, and China has also withdrawn funding from an even bigger coal project in Queensland adjacent to the site of the Adani mine.

These gestures may not signal a move towards renewables so much as a renewed focus – by China and India alike – on their own lower quality, higher polluting coal supplies. China remains a major player in global coal development:

Chinese financing is behind an estimated one-quarter of all coal power capacity under development outside China. The biggest lenders are China Development Bank and China Export-Import Bank, while the corporations most involved are large state-owned entities, including State Grid Corporation of China, China Energy Engineering Corporation, State Power Investment Corporation, and China Huadian.
Although the Chinese government has signaled it will restrict coal lending and “green” the Belt and Road, a major theme of the second Belt and Road Forum, the country has yet to formally limit its investment in coal plants.
The hoofbeats of Destiny
God once again, moves in mysterious ways. Yesterday’s announcement by Destiny Church of its intention to form a political party (to be called Coalition NZ) could well stymie any plans National might have been harbouring to create a Christian political party as the MMP partner that National sorely needs. Earlier this week, National MP Alfred Ngaro looked like he was being groomed to launch a Christian political party that could (a) help National back into power and (b) erode Labour’s Pasifika and Maori voter base in Auckland, in particular.
If Destiny now follows through this would split the Christian party vote – possibly fatally – given that the Christian voting bloc perpetually hovers just around the 5% MMP threshold. A merger between the Ngaro and Destiny parties would be out of the question, given how toxic Destiny would be to National’s wider brand. This was the case even before Hannah Tamaki, in an interview with RNZ yesterday, equated being gay with wife beating.
With a bit of luck, the Christians, the Pharisees and the money-lenders will soon be squabbling with each other as to which is which. It has happened before. For those of us who prefer the separation of church and state, that can only be seen as good news.
Bill Callahan, Apparently Happier
As he once self-diagnosed in song, legendary grouch Bill Callahan used to be darker, then he got lighter, then he got dark again. Well, Callahan seems to be lightening up once more on his new album Shepherd in A Sheepskin Vest, six tracks from which you can access here on Stereogum.

They include one song about his sympatico with the Incredible Hulk…given what anger does to Dr. Bruce Banner, that’s an interesting choice.