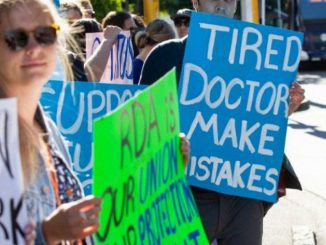 If they want to settle the junior doctors strike on anything like reasonable grounds, the DHBs should stop acting as if they’re still living 30 years in the past. Meaning: the powers that individual DHBs are seeking (ie to unilaterally determine the rosters and working arrangements for junior doctors, without any meaningful input from them) look like a throwback to the early 1990s, when the Employment Contracts Act would commonly empower individual employers to make offers their work force could not refuse. Then, as now, the rationale was that this local “flexibility” was necessary.

So necessary, it seems, that DHBs aim to give themselves the power to single-handedly rewrite the mutually agreed arrangements they signed up to only two years ago. If there’s a lack of trust out there on the picket lines about whether public health system managers will truly honour the commitments they make in negotiations… then one need only to look at how the DHBs have been behaving to understand why this situation exists.

At her Post-Cabinet press conference yesterday, PM Jacinda Ardern lamented that strike action was proceeding while a ‘facilitation’ process to resolve the dispute was under way, and that she would prefer the parties to be still pursuing the path of negotiations. Unfortunately though, that facilitation process will produce no binding outcomes. Therefore, and to lend more urgency to the facilitation talks, the strike action will usefully convey the junior doctors’ determination not to hand to management the full control over their rostering and work arrangements. It’s simple, really. Doctors’ work conditions and the quality of patient care cannot be left to the tender mercies of DHB managers focussed almost exclusively on the bottom line.

Reportedly, there are about 4,200 junior doctors in the public health system, 3,400 of whom are working on any given day. As RNZ has indicated, the cause of the current crisis can be laid at the door of the DHBs, who have recently discovered a ‘need’ for total control of the work environments they administer:

The DHB employers want to change the employment agreement to ensure that any changes to rosters or other working arrangements in future can be approved at individual hospitals following agreement with the doctors affected. It says local flexibility is needed.

They add DHB chief executives have responsibility and accountability for their hospitals and therefore need to be able to control the work environment at their DHB. They add that this will involve the Resident Doctors Association (RDA) “giving up the ability to veto rosters and training arrangements agreed at a DHB level”.

Yep, if the RDA and its members have any concerns about the safety (or sustainability) of those local rosters and training arrangements, they are being told to “give up” and shut up. Supposedly, they need to surrender their current power to reject rosters and conditions imposed on “ the doctors affected” and why is this? Apparently, its for the greater good of more ‘flexible’ management. If each individual DHB was allowed to succeed in imposing these draconian terms, a race to the bottom across all DHBs would inevitably ensue.

Right now, Health Minister David Clark has good reason to intervene, and to order DHBs to desist from trying to undermine the workplace commitments they made only two years ago. Given the levels of unmet need that exist within public health, and given the recruitment and retention problem of senior staff and specialists, a responsible Minister cannot allow DHB management to sabotage the future of the entire health system (and junior doctors are that future ) for a set of short-term efficiency gains couched in management double-speak.

Not to mention that the DHBs related attempts at union –busting (of the RDA) and the unilateral rewriting of the collective multi-employer contract involved could hardly be more at odds with the workplace behaviours that the Labour Party supposedly exists to champion. It is time for Clark to intervene – and if not now, when?

Simon Bridges – if not now, when?

Those questions raised long ago by Rabbi Hillel – “If I am not for myself, who will be for me? If I am only for myself, what am I? If not now, when?” – must be exercising the minds of the National Party caucus as they contemplate their leadership problem. With the axing of the capital gains tax, National have lost the sole issue (tax policy) on which they might have realistically hoped to win the 2020 election. From here on, it’s largely a question of damage limitation and job retention. And arguably, fewer of the National caucus might lose their jobs if Judith Collins was at the helm.

In the medium term, a change in leadership could even be seen to kill two birds with one stone. By removing Bridges now, this change would enable Collins to take National to a (smaller scale) defeat next year, but a defeat nonetheless – which would create a useful rationale for removing Collins in due course, if need be. Bridges has always seemed like a temporary backstop to the Key/English era. It was equally obvious that he would need to be gone by mid-year, to allow his successor time to get their team and messaging in place for next year’s election. To that extent, the current rumblings in the National caucus are coming right on cue.

Mind you, if Bridges wants a line of defence, another Rabbi Hillel saying also comes to mind: ‘If I am here, everyone is here; but if I am not here, who is here?’

In other words, “I am the life of the party.” The party, c’est moi. Soon enough, we will find out how many of Simon Bridges’ colleagues share that perception.

Deaths in Gaza, and California

Every murder is a tragedy, including the killing of 60 year old Lori Kaye in the recent anti-Semitic synagogue shooting in California. Each murder, however, is not given equal weight by the media. The extensive media coverage of the California shooting (including replayed interviews on RNZ early this morning with distraught friends and fellow worshippers) has not, for instance, commonly been extended to the victims of the Israeli snipers in Gaza.

Yet reportedly, during the eight months to December 2018, thousands of Palestinian protesters were shot in the lower limbs and maimed by Israeli snipers. A further 175 were killed by sniper fire over the same period. The death of only one of them – the 20 year medic Razan al Najjar who was shot dead last June while attending to the wounded – has received anything that remotely resembles the media coverage devoted to the recent shooting in California. To repeat: that synagogue shooting was an outrage. So is this situation in Gaza, where the numbers of the dead are almost numbing in their impact:

The independent Commission of Inquiry, set up last year by the UN’s human rights council, said Israeli forces killed 189 people and shot more than 6,100 others with live ammunition near the fence that divides the two territories.

The panel said in a statement that it had found “reasonable grounds to believe that Israeli snipers shot at journalists, health workers, children and persons with disabilities, knowing they were clearly recognisable as such”. Thirty-five of those killed were children, three were clearly identifiable paramedics and two were clearly marked journalists, the report said.

Every one of the murdered in Gaza had family members and fellow worshippers too, who would have had their own grief to communicate. The selective media coverage evident isn’t a new problem for the media. In the early 1980s, Alexander Cockburn wrote satirically about the impact that the killing onscreen of US ABC news reporter Bill Stewart (by a government soldier in Nicaragua) had upon US support for the regime, given the informal calculus involved:

Any sensible dictator knows that in terms of unfavourable international publicity it is perfectly safe to kill the social entity known to news editors as ‘tribesmen’ in fairly large numbers – let us say, up to 30,000 to be on the safe side. “Peasants’ – a noun with affecting pastoral undertones – are a little trickier. Perhaps one peasant for every hundred ‘tribesmen.’ The murder of priests, missionaries and nuns is an affair of the nicest judgement, as we shall see in the case of El Salvador… As a rule of thumb, men of the cloth should be spared, though the elimination of Dominicans, particularly those in rural areas, may be practiced in moderation. Count 200 peasants for one priest.

What our Third World dictator should avoid is the murder of journalists, or at least of those who are citizens of the United States. Count 10,000 peasants for one American reporter; 20,000 if the reporter is from one of the networks, 50,000 if the murder takes place on camera.”

The moral calculations used by the media have not changed much since Cockburn wrote that article, nearly 40 years ago. On the evidence of this week’s media response, count about one hundred Gazans for every Israeli, and/or for every Jewish citizen of the US.

Melancholy has been thoroughly mainstreamed… such that depression and that hollow feeling inside is now the default setting of almost every other current popular music track you care to name. Before that trend set in with a vengeance, there were a few bands out there making sad music that had both both heart and brains – as say for example, this 2014 track by US emo outfit American Football:

Even celebrities have their rough times. It may be simplistic to reduce this extraordinary video by FKA Twigs to a rumination about how public pressure contributed to her breakup with Robert Pattinson, but… It’s more of a way of grounding its Icarus imagery in the personal. Either way, this another in a long line of striking videos from her…